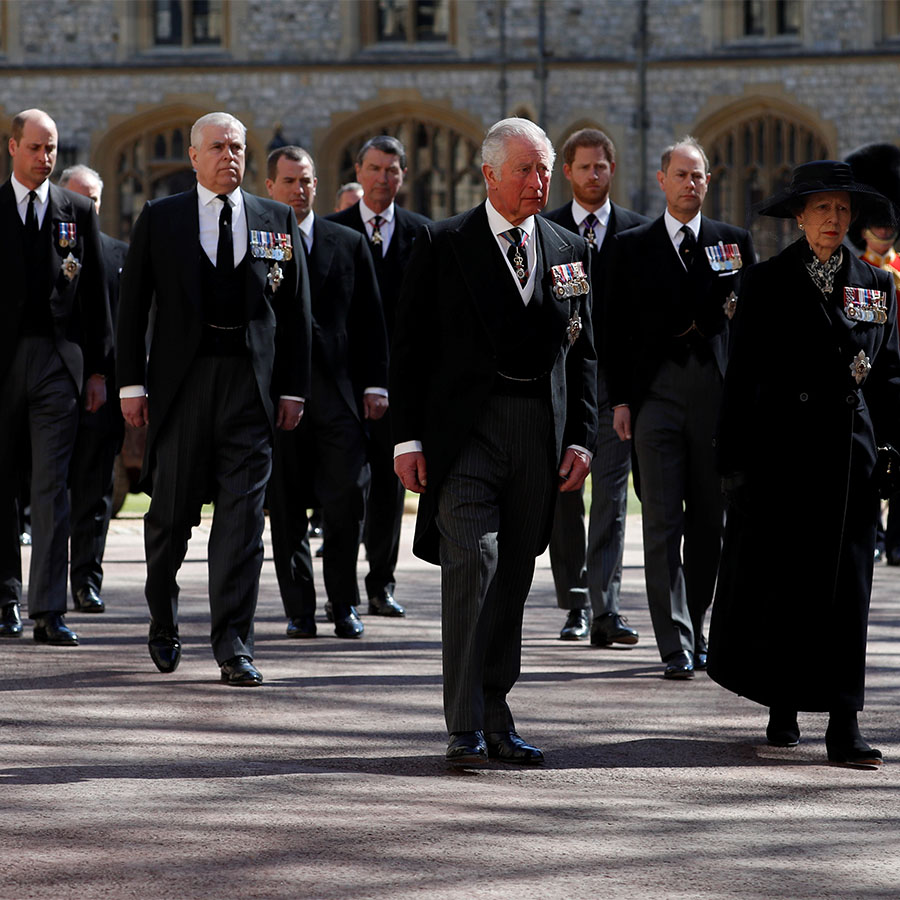 Prince Charles, Princess Anne and members of the Royal Family walk behind the hearse on the grounds of Windsor Castle during the funeral of Prince Philip, husband of Queen Elizabeth, who died at the age of 99. Photo: Alastair Grant/Pool /REUTERS

Prince Philip began his final journey on Saturday, his coffin borne on a specially modified Land Rover hearse, followed on foot by a procession of senior royals including Prince Charles and Princes William and Harry.

Queen Elizabeth followed the procession in the State Bentley as the coffin, carried on the bespoke Defender TD 130 in military green, made its way to Philip’s funeral service at St George’s Chapel in Windsor Castle.

Charles and Princess Anne followed the coffin on foot, followed by their brothers Edward and Andrew. Behind them were Charles’s two sons William and Harry – evoking memories of the 1997 funeral of Diana when they walked as grieving boys behind their mother’s coffin.

Philip, officially known as the Duke of Edinburgh, died aged 99 on April 9.

His naval cap and sword lay on top of the coffin, which was covered with the Duke of Edinburgh’s personal standard featuring the Danish coat of arms, the Greek cross, Edinburgh Castle and the stripes of the Mountbatten family.

The Band of the Grenadier Guards led the procession, followed by military chiefs. The coffin will pause for the national minute of silence at 3 p.m. (1400 GMT.) A gun fired from the East Lawn will signify the start and end of that.

Before the coffin emerged from the castle, military bands spaced out across the quadrangle in brilliant sunshine to play the prince’s chosen music, including “I Vow To Thee My Country,”, “Jerusalem” and “Nimrod”.

In the service, which starts at 3 p.m. (1400 GMT), the 94-year-old queen will stand alone due to COVID-19 restrictions as her husband’s coffin is lowered into the Royal Vault of the ancient chapel.

Philip, who married Elizabeth in 1947, helped the young queen adapt the monarchy to the changing world of the post-World War Two era as the loss of empire and the decline of deference challenged the world’s most prominent royal family.

She has now been widowed just as she grapples with one of the gravest crises to hit the royal family in decades – allegations of racism and neglect by it from her grandson Harry and his American-born wife Meghan.

Much media attention will focus on the royals’ behaviour towards Harry as he makes his first public appearance with the family since the couple gave an explosive interview to Oprah Winfrey last month.

In the interview they accused one unnamed royal of making a racist comment, and said Meghan’s pleas for help when she felt suicidal were ignored.

The couple, who moved to Los Angeles and quit royal duties last year, laid bare their perceptions of the family’s attitudes in what amounted to a critique of the old-fashioned customs of an ancient institution.

Meghan said she had been silenced by “the Firm” while Harry said his father, Charles, had refused to take his calls. Harry said both Charles and his brother William were trapped in the royal family.

Meghan will watch the funeral at her home in California after she was advised by her doctor not to travel while pregnant, a source familiar with the situation said.

Mourners will eschew the tradition of wearing military uniforms, a step newspapers said was to prevent embarrassment to Harry, who despite serving two tours in Afghanistan during his army career, is not be entitled to wear a uniform because he was stripped of his honorary military titles.

“We’re not going to be drawn into those perceptions of drama, or anything like that,” a Buckingham Palace spokesman said. “This is a funeral. The arrangements have been agreed, and they represent her majesty’s wishes.”

Prince Andrew, who stepped down from public duties in 2019 over controversy surrounding his what he termed his “ill-judged” association with late U.S. financier Jeffrey Epstein, had wanted to wear an admiral’s uniform at the funeral, British media reported.

There will be just 30 mourners inside the chapel for the service because of COVID-19 restrictions.

Archbishop Welby, leader of the worldwide Anglican Communion, said he expected the funeral to resonate with the millions of people around the world who have lost loved ones during the pandemic.

Philip’s dedication to his duty earned him widespread popularity in Britain, but he was also criticised by some for a number of off-the-cuff racist or abrupt comments which shocked princes, priests and presidents.

“He was authentically himself, with a seriously sharp wit, and could hold the attention of any room due to his charm and also because you never knew what he might say next,” Harry said of his grandfather.

British television stations have cleared their schedules to show the funeral and millions are due to watch, though there have been over 100,000 complaints to the British Broadcasting Corporation over its blanket coverage since Philip died.

Philip was a decorated Royal Navy veteran of World War Two and his funeral, much of which was planned in meticulous detail by the prince himself, will have a strong military feel, with personnel from across the armed forces playing prominent roles.