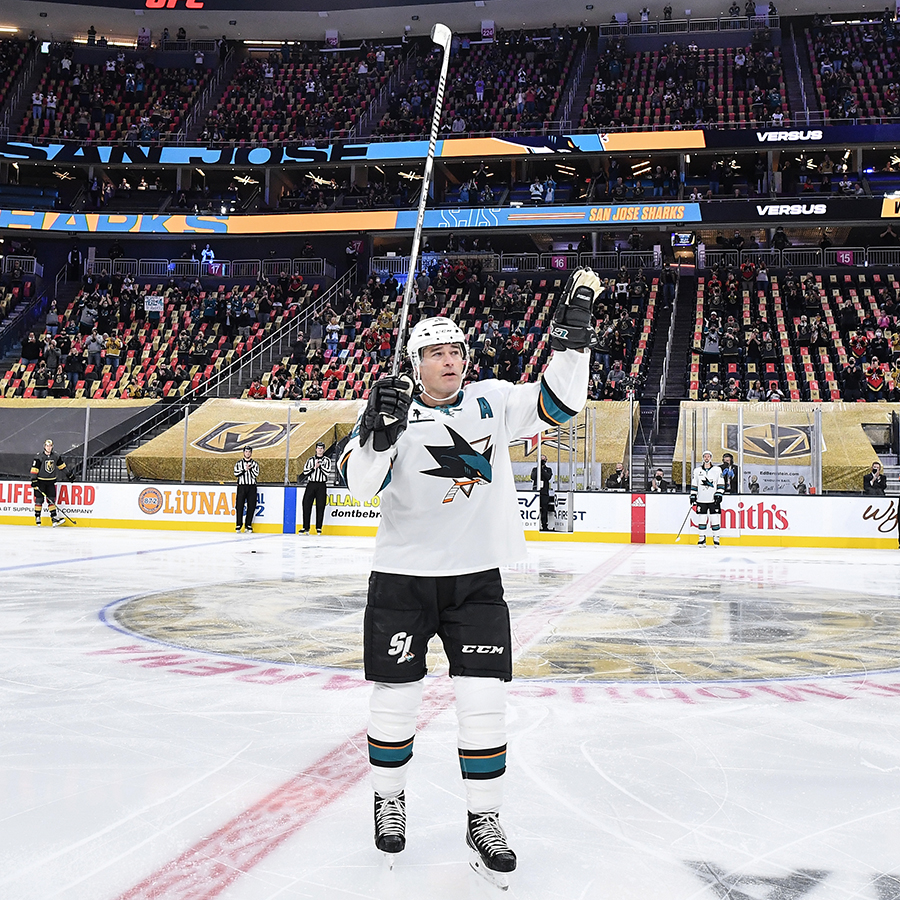 Patrick Marleau of the San Jose Sharks waves to the fans after breaking Gordie Howe's record for most games played against the Vegas Golden Knights in Las Vegas, Nevada. Photo: Brandon Magnus/NHLI via Getty Images

The 41-year-old NHL veteran skated in his 1,768th game — against the Vegas Golden Knights — which was paused early on for a congratulatory message from NHL commissioner Gary Bettman and a rousing applause from the Vegas crowd.

“You go to battle with these guys day in and day out, you play against them, and they know the grind and know what it takes to play in this league,” an emotional Marleau said in a pre-game interview. “For them to show their respects and have all these kind words, it’s very humbling.”

The Iron Men From Saskatchewan

Marleau was born in Swift Current, Sask., and raised near Aneroid. He began his NHL career in 1997 with the Sharks — his first of three stints, including his current one, with the franchise.  In between, he spent time playing for the Toronto Maple Leafs and Pittsburgh Penguins.

Ahead of Monday’s game, congratulations poured in from former teammates, coaches and The Great One himself, Wayne Gretzky, who reached out via text. But it was a message he received from Howe’s son, former NHL player Mark Howe, highlighting his father’s and Marleau’s shared Saskatchewan upbringing, that hit close to home.

Gordie Howe’s youngest son, Murray Howe, said he was happy to see Marleau eclipse his dad’s record, but not simply because of his Saskatchewan connection.

“I think he’d be very thrilled and the first out on the ice to applaud Patrick on this really incredible milestone,” he told CBC News. “[Marleau] is a class act. Just in the same way that Gretzky broke dad’s scoring records, it was great to see it accomplished by someone who was humble and dedicated to the game and grateful for the things that he had.”

Since he was drafted second overall by San Jose in 1997, Marleau has notched 566 goals and 639 assists. He told the Toronto Star that, by his fifth season, he had an idea that he would be in for a long professional career.

“You’ve had some good years, you’ve played a number of games, but you’re starting to feel you’re getting a really good grasp on the hockey lifestyle and what you need to do to be successful,” he said.

Marleau’s work ethic and passion, which he’s earned a reputation for around the league, started long before he signed an NHL contract. Even as a kid on the farm near with no rink in sight, a young Marleau found a way to hone his skills. His father, Denis, who still farms at age 74, says Marleau would lug an ice cream container full of pucks out to the barn to practice his shot on a piece of plywood.

“You always knew where he was on the farm,” the elder Marleau told CBC News. “You could hear this bang, bang — the pucks hitting the boards. We didn’t have to tell him to do anything about hockey. He just loved it.”

When asked what keeps him coming to the rink in his post-game interview on Monday night, Marleau summed up the passion he has for hockey in just a few words.

“I just love it,” he said fighting back tears. “There’s nothing else like it.”

It’s that passion that Murray Howe says would make his dad most proud.

“It is more about doing what he loves and feeling fortunate that he could do it as long as he could and do it at the level that he did,” he told CBC News.