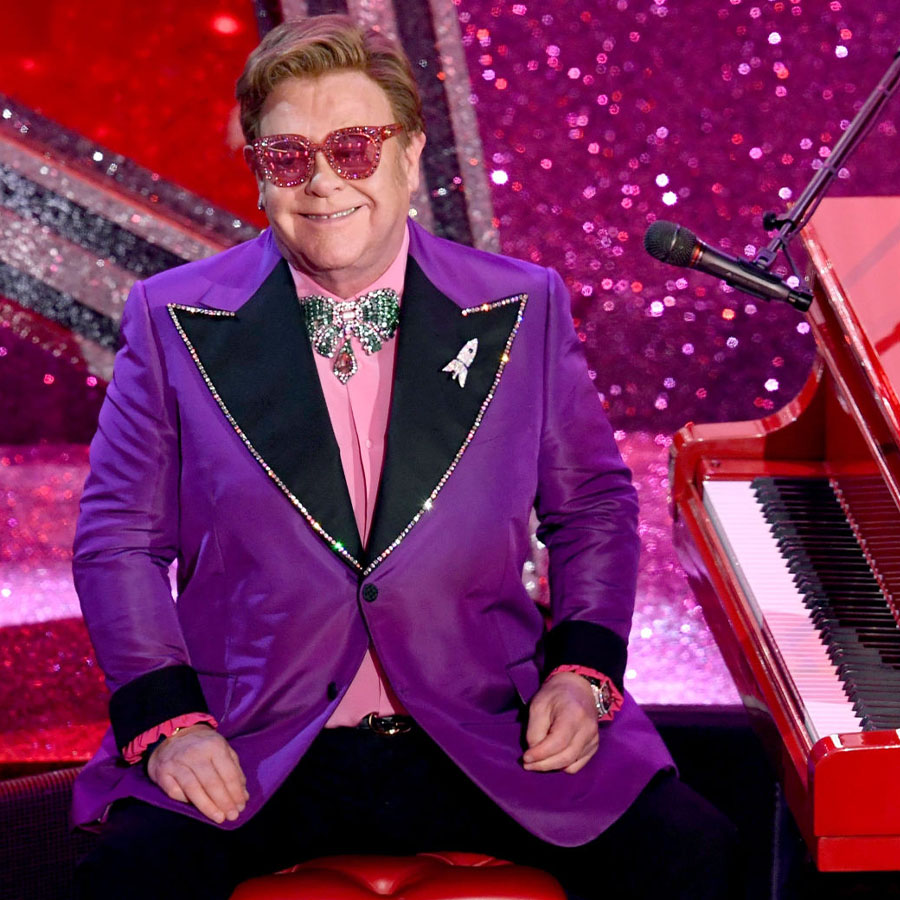 Elton John, seen here performing during the 2020 Academy Awards — at which he won his second Oscar for Best Original Song for "(I'm Gonna) Love Me Again" from the biopic 'Rocketman' — invited fans to (virtually) join his annual Oscars party fundraiser for the first time ever this year. Photo: Kevin Winter/Getty Images

The annual Elton John AIDS Foundation Academy Award Party remains — on the calendars of the rich and famous — one of the year’s most anticipated celebrity soirees.

Sharon Stone, a frequent attendee of the fundraiser, once told The Hollywood Reporter that “People have to go to other parties, but people want to go to Elton’s party.”

And beginning with its inaugural event in 1993, the fundraiser routinely attracts a guest list that rivals the Oscars itself. Case in point, a famous photo from that 1993 event (below), in which Sir Elton is tucked into a booth with Tom Hanks (who’d just won the Best Actor Oscar for Philadelphia), Steven Spielberg (who took home Oscars for Best Director and Best Picture for Schindler’s List that night), Bruce Springsteen (who won Best Song for “Streets of Philadelphia” from Philadelphia), as well as actress Rita Wilson (Hanks’ wife), the E Street Band’s Patti Scialfa (also Springsteen’s wife) and others.

Until this year, however, the fundraiser has always proved an uber exclusive party. But as John, 74, and his husband, Canadian filmmaker David Furnish, 58, announced in a video on social media this week, the 2021 bash is open invitation.

The video, which you can watch above, is filmed in the style of an infomercial and begins with John — in housecoat, slippers and hair curlers while holding a vacuum — standing next to Furnish in a housecoat and slippers. John asks, “Bored with lockdown?” before an instant costume change sees the pair dolled up in floral blazers, ready for Oscar night. Between them stands a life-size cut out of British singer-songwriter Dua Lipa, who is headlining the event and will also duet with John.

Furnish, meanwhile, announces that the event — which will be streamed virtually on Oscar night with replays the following day — is open to the general public for the first time ever, with tickets set at $19.99. Click here to purchase tickets and select your viewing time. The fundraiser routinely rakes in millions for John’s AIDS Foundation, and some estimate that this year’s event could raise up to US$8 million.

Actor Neil Patrick Harris — who stars in the five-part drama series It’s a Sin, about a group of men in the ’80s and early ’90s living through the HIV/AIDS crisis in England — will co-host the event with John, with numerous other celebrity appearances are expected.

The rocker founded the Elton John AIDS Foundation in 1992 and it has reportedly raised in excess of US$450 million over its 29-year history to combat HIV/AIDS around the world. The Hollywood Reporter notes that John founded the charity following the loss of countless friends to the disease, including Queen lead singer Freddie Mercury and Ryan White — an Indiana teen who contracted HIV from contaminated blood following a transfusion in 1984 who made global headlines when, upon receiving his AIDS diagnosis, was refused readmittance to school. He died in 1990 at age 18.

“We first met Elton in 1986,” White’s mother, Jeanne Ginder-White, told The Hollywood Reporter in the same story. “Ryan went on Good Morning America and David Hartman asked him, ‘Who are you looking forward to meeting [at an upcoming benefit]?’ Ryan said Elton John. I ask him why and he said, ‘Because he’s not afraid to be different.’ Elton later ended up flying us out to L.A. We ended up staying 10 days,and he just became part of our family.”

“Now more than ever, we need to ensure that one pandemic does not override another,” John said recently, ahead of this year’s Oscar fundraiser. “And we cannot forget the 38 million people living with HIV globally who need our care, love and support, so we hope everyone joins us for this special one of a kind Oscar Pre-Party.”

John himself has won two Oscars in his career, both for Best Original Song: in 1995 for “Can You Feel the Love Tonight” from The Lion King and in 2020 for “(I’m Gonna) Love Me Again” from the biopic Rocketman.