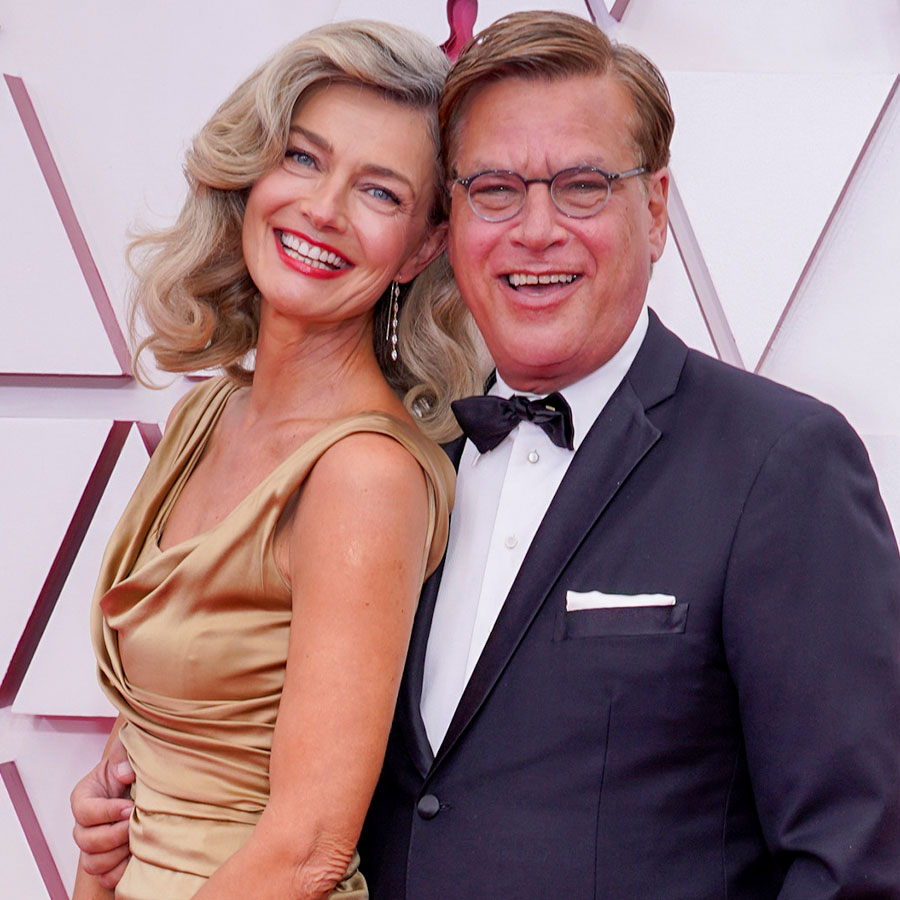 You’ve heard of “Instagram official,” which is when a couple confirms their romantic attachment on social media. Well, screenwriter Aaron Sorkin and supermodel Paulina Porizkova declared themselves “red carpet official” on the biggest red carpet there is last night at the Academy Awards. Sorkin, 59, a previous Oscar winner (for the adapted screenplay of The Social Network), was up for another Oscar this year for best original screenplay for his film The Trial of the Chicago Seven. He brought Porizkova, 56, as his guest and the new couple packed on the PDA with the writer unable to keep his hands off the beauty in her cowl-neck gold ruched mermaid-style gown.

The past few years for the Czech-born beauty have been tumultuous: in 2019, she found her then-estranged husband, Cars frontman Ric Ocasek, 75, dead in the Grammercy Park, Manhattan home they still shared. The rocker, who had been ill for some time, died suddenly of cardiac issues exacerbated by emphysema. The pair had been together some 35 years since they met on the set of the Cars video for “Drive” in 1984. The then-19-year-old Porizkova was cast as the hot “exotic” babe in the video. Ocasek and Porizkova, with a 19-year gap in their ages, married in 1989, and the couple have two grown sons.

The pair had split in 2018 and Porizkova attempted to put a positive spin on the breakup at the time with the following sentiment: “Our family has always been—and still is—a well-built car. When the four of us are together, we can go wherever the road takes us. But as a bicycle, my husband and I no longer peddle in unison. So we’re ditching the bicycle.”

But things weren’t as sunny as her mixed-wheel metaphors. It turns out Ocasek had cut Porizkova out of his will before his death. In fact, his last wishes read: “I have made no provision for my wife … as we are in the process of divorcing. Even if I should die before our divorce is final … Paulina is not entitled to any elective share … because she has abandoned me.” Ouch! The model showed pictures on her Instagram as she was forced to leave the marital home late last year.

Porizkova continues to be very open on Instagram, often posting bikini pictures, showing how she has kept up her famous figure, and makeup-free selfies that bely her age in years. There was a hint, however, she was dating again, as she recently posted a selfie of herself in a doctor’s office atop a pelvic floor exerciser. She joked that it would be good for her sex life (the machines are rising in popularity with gynecologists and sexual-health experts).

For his part, Sorkin has been linked to a wide array of women: following his divorce from wife Julia Bingham, he dated NYT columnist Maureen Dowd, actress and singer Kristin Chenoweth, comedienne Jane Krakowski and Sex and the City star Kristin Davis.

But unlike many Hollywood romances — which often tend toward the May-December variety — these two lovebirds are almost the same age. In fact, there’s a certain refreshing aspect about seeing a new couple in their mid-late 50s swooning over each other like teenagers in love on prom night.

And the intriguing pairing of the emotionally open Czech model and former rockstar wife and the playboy-intellectual writer who is no stranger to high-profile relationships himself comes together at an interesting juncture — a mid-pandemic romance with a power-couple photocall. It certainly brought a frisson of romance to the Oscars red carpet, topped only by the moment Riz Ahmed lovingly fixed his new wife’s hair before their own couples snap.