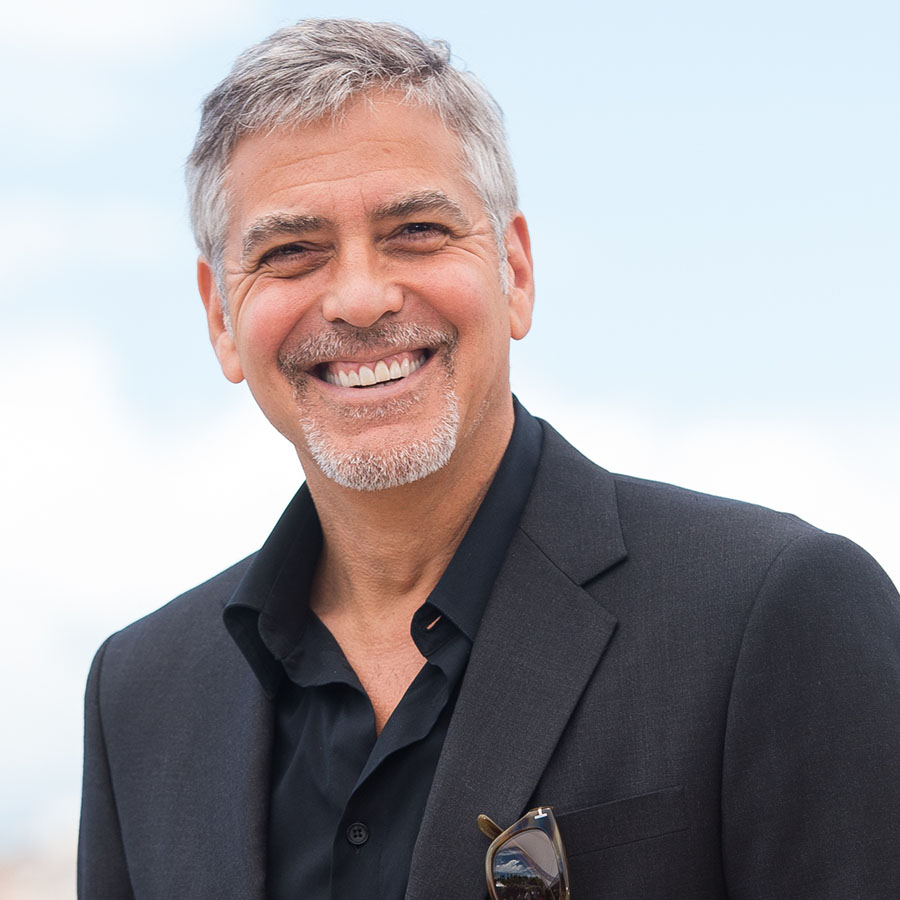 George Clooney, seen above at the Cannes Film Festival in 2016, turns 60 on May 6. The day before, however, he released a charity video that poked fun at some of his films and professed an obsession with his real-life pal Brad Pitt. Photo: Samir Hussein / WireImage via Getty Images

George Clooney isn’t thrilled about turning 60. In a recent interview with Entertainment Tonight, the Oscar-winner was asked about his milestone birthday on May 6 and quipped, “As far as turning 60 — listen, I’m not thrilled with it but it’s better than dead. So, I’ll take it. I got two options. The older you get, the lower your bar gets.”

It appears, however, that Clooney has been preparing for this moment for years. In a chat with his One Fine Day co-star Michelle Pfeiffer for Variety earlier this year, Clooney noted that, in the past few decades, he’s focussed more on producing and directing than on screen roles because he wanted more control over his career and “I didn’t want to worry about what some casting director or director thought about me at 60 years old.”

That said, Clooney’s latest on-screen role — which dropped the day before his 60th birthday — is creating a lot of buzz for a good cause. The video, which you can watch below, features the actor discussing a fundraiser for the Clooney Foundation for Justice — which he founded with his wife, human rights lawyer Amal Clooney, 43, in 2016. In the video, Clooney announces a chance to win a trip to his villa on Italy’s Lake Como to spend time with him and Amal, before extolling the virtues of meeting strangers and becoming friends. He goes on to explain that he spent the last year of the pandemic living with a stranger he met online, followed by vignettes of Clooney and his new pal, named Byron, living together. Byron, however, is not a fan of living with Clooney — particularly because of the actor’s unhealthy obsession with fellow Oscar-winner Brad Pitt.

“Basically, George Clooney swung by my house to pick up something he was buying from me on Craigslist and the stay-at-home order hit and he never left. The moral of the story is, don’t use Craigslist,” Byron explains, before noting how annoying it is to live with Clooney.

At one point in the video, Clooney shows off his room full of Brad Pitt memorabilia (“Can you believe Amal wanted me to throw this away?”) before crashing a Zoom call on which Byron is angling for a promotion with his boss, among other annoying habits. The actor also pokes fun at his own film flops, like the near-universally panned 1997 film Batman and Robin.

The Importance of Giving Back

In his discussion with Entertainment Tonight, Clooney opened up about his charitable work, which includes celebrating the 100th anniversary of the Motion Picture & Television Fund — which helps struggling workers in the film and television industries — in April.

Clooney noted that he received help as a struggling actor when, at one point, he didn’t have a place of his own and slept in a friend’s closet. He added that he and Amal have tried to instil charitable values in their soon-to-be four-year-old twins, Ella and Alexander.

Of course, Clooney himself has come a long way since sleeping in a friend’s closet — and we don’t just mean his Italian villa. At age 60, he’s still one of the biggest stars in Hollywood — a two-time Oscar winner who continues to use his celebrity clout to engage in human rights activism. Though he can still laugh at himself, like during the 2015 Golden Globe Awards — where hosts Tina Fey and Amy Poehler roasted him ahead of him receiving the Cecil B. DeMille Award for lifetime achievement.

“George Clooney married Amal Alamuddin this year,” Fey noted. “Amal is a human rights lawyer who worked on the Enron case, was an adviser to Kofi Annan regarding Syria and was selected for a three-person UN commission investigating rules of war violations in the Gaza strip. So tonight, her husband is getting a lifetime achievement award.”

Clooney, however, isn’t resting on his Hollywood laurels. His 2020 Netflix film The Midnight Sky was one of the streaming service’s most watched films of the year while last month he was spotted taking selfies with fans on location in Massachusetts while directing Ben Affleck (one former Batman directing another) in the upcoming film The Tender Bar.

And he’s also slated to star with his Ocean’s Eleven and Ocean’s Twelve co-star Julia Roberts, 53, in the upcoming film Ticket to Paradise, in which the pair plays a divorced couple attempting to stop their daughter’s marriage.

So to celebrate George Clooney’s 60th birthday we uncovered six fascinating facts about him:

2. Before breaking into acting, Clooney tried out for the Cincinnati Reds in the hopes of achieving baseball stardom. Obviously, he didn’t make the team.

3. Clooney auditioned for the role of the handsome drifter, J.D., in the 1991 film Thelma & Louise but lost out to future friend and co-star Brad Pitt.

4. Clooney also has two Oscars — one for Best Supporting Actor for the 2005 film Syriana and one as a producer on the 2012 film Argo, which won Best Picture. With the first win, however, he became the only actor who’d portrayed Batman to win an Oscar. Eventually, fellow Batman Christian Bale nabbed a Best Supporting Actor Oscar for the 2010 film The Fighter. Ben Affleck, of course, shared the Oscar for Best Original Screenplay with Matt Damon in 1998 for Good Will Hunting, but he wouldn’t play Batman until 2016.

5. Clooney, however, also holds another unique Oscar distinction in that he is the only actor to receive Oscar nominations in six separate categories. According to IMDB, they are: Best Picture (Argo, 2013), Best Actor (for The Descendants in 2011, Up In The Air in 2009 and Michael Clayton in 2007), Best Supporting Actor (Syriana, 2005), Best Director and Best Original Screenplay (Good Night And Good Luck, 2005) and Best Adapted Screenplay (The Ides Of March, 2011). Walt Disney is the only other person to receive Oscar nominations in six categories.

6. While filming Ocean’s Eleven in Las Vegas, the stars of the film enjoyed hitting the casinos. While there, Matt Damon reportedly watched Clooney lose 25 consecutive hands of blackjack.