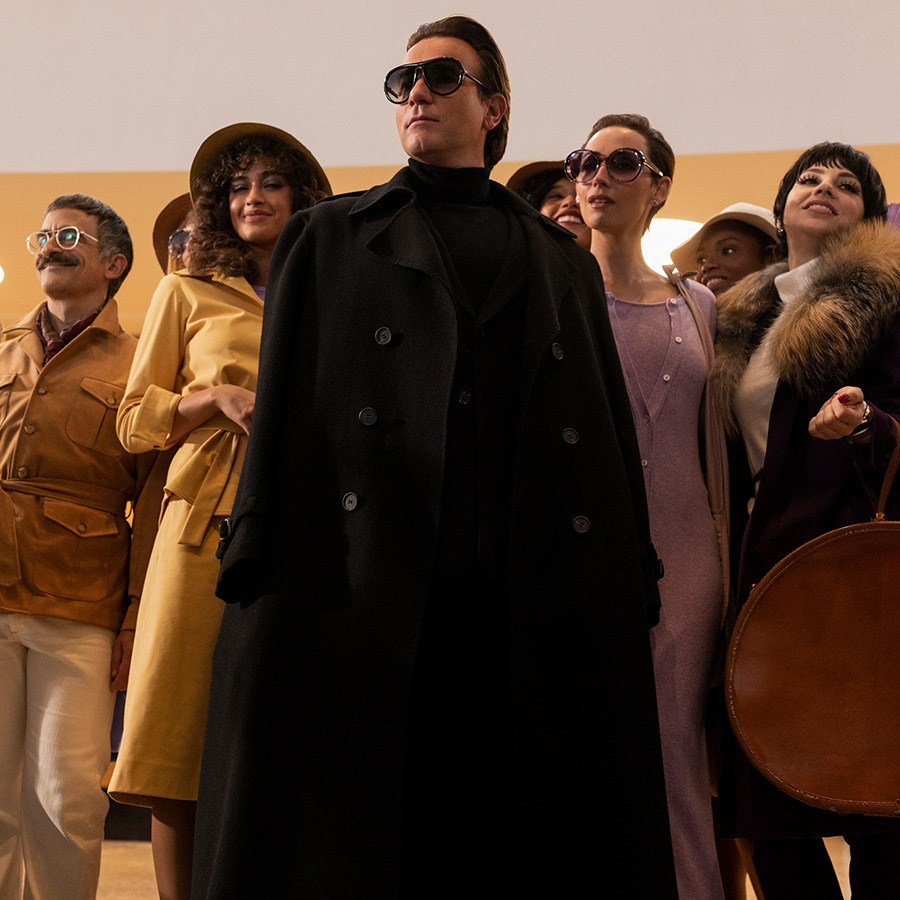 The ongoing influence of designer Halston can still be seen in fashion and culture today. Above, members of the cast of the new Netflix series 'Halston.' From left: Shannan Wilson as Bobbi Mahoney, Bill Pullman as David Mahoney, The Halstonettes, Ewan Mcgregor as Halston, Rebecca Dayan as Elsa Peretti, Krysta Rodriguez as Liza Minnelli, and Shawna Hamic as Pat Ast. Photo: Atsushi Nishijima / Netflix

Halston ruled American fashion for nearly 20 years and has been the subject of many books, biographies, retrospective fashion exhibitions, and an informative 2019 documentary called Halston by Frédéric Tcheng (as well as a rambling amateurish one called Ultrasuede: In Search of Halston). But nothing cements a legacy in the popular imagination quite like a Ryan Murphy production.

So before tuning in to enjoy the disco-era excesses, read our cheat sheet to remind yourself of why Halston is more relevant than ever.

Halston’s first taste of fame was as the man behind First Lady Jacqueline Kennedy’s streamlined pillbox hat at the 1961 Inauguration (it’s a striking piece of sculpture and now in the Smithsonian).

He also created the toppers in Barbra Streisand’s iconic “Second Hand Rose” segment from her 1965 TV special My Name Is Barbra — filmed at Bergdorf Goodman, where he worked in the Hat Salon. He also went on to craft the masks for dozens of guests at Truman Capote’s famous 1966 Black & White Ball (including for its guest of honour, Katharine Graham) before striking out on his own with luxury and ready-to-wear fashion.

A Breath of Fresh Air

During the profound cultural shifts (think: the Watergate scandal, Roe. v. Wade, and Vietnam War) the early 1970s, Halston ushered in a new era of streamlined, luxurious and, frankly, feminist glamour that reflected the political, social, and economic upheaval. “He took away the cage and made things where you didn’t really need the structure as much as you needed the woman,” model Pat Cleveland remarks in Tcheng’s Halston documentary.

Garments were minimalist, with few-to-no seams, but by no means austere since they were made from luxurious double-faced cashmere, light silks, or slinky matte jersey ingeniously cut on the bias. “His clothes danced with you,” is how Liza Minnelli put it in the same documentary.

Outfits were body-conscious but always supremely comfortable. The words “comfort and ease” come up again and again in reference to Halston clothes —and the same notion of refined casual that was embraced in the 1970s is a refrain we are hearing a lot right now with the profound work-from-home and lifestyle shifts of the pandemic.

Even his taste in opulent but supremely comfortable interiors has also endured and proved influential: “I’ve been copying those Halston sofas and chairs since I was at Gucci,” according to a recent interview with designer Tom Ford, who now owns Halston’s famed townhouse and is redoing the top room in mirrors and monochromatic red as an homage to the previous owner’s stylish office.

Halston intuited that there was a new social order coming in, beyond the clothes themselves. First, his magnetic personality made him memorable, and he went by one-name only (like Cher and, later, Madonna) and donned a black cashmere turtleneck as part of his signature uniform (decades before Steve Jobs). Next, his high-profile social life and entourage became part of his self-promotion. The Halstonettes — as his group of models and muses who accompanied him in public were known — were also a racially and physically diverse group of women that included Alva Chinn, Karen Bjornson, Pat Cleveland, Pat Ast and future Oscar-winning actress Anjelica Huston.

They were the original influencers, who perpetuated one another’s fame and became recognizable public figures in their own right. Between 1977 and 1980 their nexus was Studio 54, the disco stomping grounds populated by celebrities from Eartha Kitt to Andy Warhol; Halston would dub it his “made-to-order showroom.”

Later, he partnered with manufacturers to use and promote their cutting-edge materials (like the Ultrasuede of his wildly bestselling shirtdress) and worked with China to promote their silk factories through a much-publicized tour with his entourage in 1980. Nowadays, we call what Halston pioneered a ‘personal brand’ and were he still alive, he’d have millions of Instagram followers.

As socially ambitious as he was talented, Halston threw extravagant parties in his modernist, Paul Rudolph-designed townhouse and at his dramatic headquarters, a mirrored aerie on the 21st floor of Manhattan’s Olympic Tower overlooking St. Patrick’s Cathedral. The ultimate self-marketer was also a red carpet and everyday favourite of several top actresses and celebrities, including Elizabeth Taylor, Bianca Jagger, and Lauren Bacall. Most notable was his close association with Liza Minnelli; having created the gown she wore when accepting the Oscar for Cabaret, he went on to design her costumes for film and stage, finally becoming Minnelli’s exclusive designer.

But by also branching out to design everything from the diaphanous stage costumes for Martha Graham ballets and uniforms for the 1976 U.S. Olympic team to Braniff Airlines crew and Girl Scouts uniforms, Halston made himself a household name. As a result, he appeared as an answer on the game show What’s My Line? and guest starred on The Love Boat — as himself, surrounded by his Halstonettes. Every appearance was a branding opportunity.

Halston was all about larger-than-life glamour and chose the talented friends in his orbit accordingly. He cross-pollinated with Andy Warhol, who shared overlapping spheres of cultural influence and at times, partners in crime (e.g. the iconic Warhol flower dress, an embodiment of their friendship). Former window dresser and design assistant Joel Schumacher went on to become a costume designer and later, acclaimed Hollywood director. (Fashion designers Stephen Sprouse, Ralph Rucci, and Naeem Khan were also former Halston design assistants). Meanwhile, the photographer Hiro created his marketing and advertising imagery.

And it was Halston who encouraged his friend and former model Elsa Peretti (who died in March at the age of 80) to design jewellery; several of her first designs, like the Bone cuff and horsebit belt, were styled into his runway presentations years before she signed her legendary partnership with Tiffany & Co. She also designed the organic teardrop bottle for Halston’s blockbuster namesake fragrance (which, within two years of launch, had generated US$85 million in sales).

There had been other notable American designers (such as Bonnie Cashin and Claire McCardell), and Halston himself was an admirer of the great American couturier Charles James. But it’s Halston who put American fashion on the map.

The Netflix series recreates The Battle of Versailles, as the legendary fundraising event was known, a spectacle that captured international attention when it took place at Versailles in November 1973. The runway face-off pitted American designers such as Stephen Burrows, Oscar de la Renta, Anne Klein, and Halston against their French counterparts Pierre Cardin and Yves Saint Laurent. Covered in detail in Deborah Riley Draper’s documentary Versailles ’73, the youthful, and energetic showcase paired Minnelli’s talents with fresh easy clothes on an unprecedented number of Black models and is considered a turning point in the hierarchy of international fashion — which had previously been dictated by Paris designers.

A Business Savvy Mix of High/Low

Halston founded his eponymous label in 1969 and then profitably sold both the brand and trademark to Norton Simon (a conglomerate that owned both Max Factor and Canada Dry ) before eventually being forced out, in 1984, of the company that bore his name.

The story of his rise and fall is the same tension between art and commerce that designers grapple with today.

Decades before the Target and H&M guest designer collaborations, Halston was among the first major names to expand his reach by producing a spinoff line for JC Penney. Like Christian Dior before him, and Michael Kors now, his lifestyle empire ranged from luggage to carpets to wigs.

Today his ill-fated licensing partnerships serve as a cautionary tale (because at the time, his core client Bergdorf Goodman balked and dropped his luxury line). But it’s since become not only the norm, but the goal of lifestyle brands to have aspirational but affordable diffusion lines that reach the lucrative mass-market in every possible category. And the Halston still carries the weight of his myth: there have been been attempted revivals of the brand in recent years (including Halston Heritage, by a consortium of investors that included Sarah Jessica Parker and Harvey Weinstein), but none have truly stuck.

A notorious workaholic, Halston was also notorious for copious illicit drug use. Intimates like Liza Minnelli and André Leon Talley have praised the Netflix series even as the Halston family denounces it (niece Lesley Frowick has voiced their dismay), due to what it reflects of his tempestuous personal life.

Over the years the designer’s excesses have been widely acknowledged by his inner circle and, alongside his talent, have become part of his myth.

Viewers, though, will be smart enough to see beyond the cocaine-fuelled dinner parties to note that Halston’s lifestyle excesses in no way diminish his accomplishments.