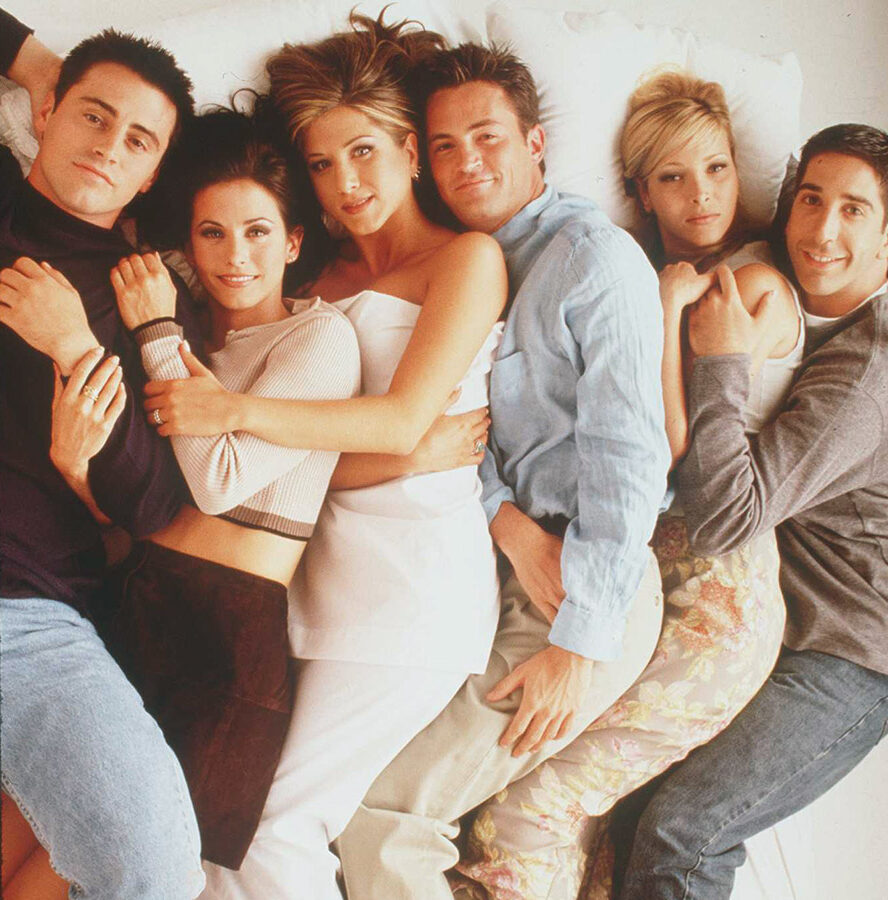 The full-length trailer for next week’s Friends reunion finally dropped today, giving fans a glimpse at the fun and nostalgia they can expect from the long-awaited special.

The trailer shows all six principal cast members — Jennifer Aniston, 52, David Schwimmer, 54, Courteney Cox, 56, Lisa Kudrow, 57, Matt LeBlanc, 53, and Matthew Perry, 51 — meeting and reminiscing on the show’s original soundstage. It kicks off with the cast recreating their famous quiz scenes from the Season 4 episode “The One With the Embryos,” in which Chandler and Joey “win” Monica’s apartment.

They also visit other sets from the series, including Chandler and Joey’s apartment, the Central Perk coffee house and the fountain from the opening credits, while recreating famous moments from the show. In addition, they read from old scripts and discuss their experiences from the show’s original 1994-2004 run. At one point, interviewer and Late Late Show host James Corden asks the cast if Ross and Rachel were, famously, “on a break.”

Along with the principal cast, the trailer offers a glimpse of famous guest or recurring stars who returned for the reunion, including Tom Selleck, 76, who played Monica’s love interest Richard, and Maggie Wheeler, 59, who played Chandler’s annoying ex-girlfriend Janice. As well, the cast members were also treated to what appeared to be a fashion show featuring models wearing past costumes from the series — including the Holiday Armadillo.

The Friends reunion was originally slated for 2020 but got pushed back by the pandemic. Last August, however, Aniston told Deadline that the delay “has also given us more time to make it even more exciting and more fun than it would have been. So I choose to see it as the glass is half-full that it got postponed.”

And to that end, the trailer indicated a much more involved and creative show than other recent sitcom reunions, such as the 2020 Fresh Prince of Bel-Air reunion that featured the cast largely gathered on one set discussing the show.

Last Thursday, the Friends cast shared a short teaser trailer for the special, dubbed “The One Where They Get Back Together,” on Instagram. It featured all six leads walking arm in arm on their former studio lot to a slowed-down version of the sitcom’s theme song.

The special — which is a reunion and not a new episode — will feature more guests, including Elliott Gould, 82, and Christina Pickles, 86, who played Ross and Monica’s parents; James Michael Tyler, 58, who played Rachel-obsessed Central Perk boss Gunther; and Larry Hankin, 80, who played the crazy downstairs neighbour Mr. Heckles. Reese Witherspoon, 45, who guest starred in a Season 6 episode as Rachel’s sister Jill, also appears, as does actor Thomas Lennon, 50, who played Joey’s “identical hand twin” in the Season 5 finale episode. In addition, other guests include Justin Bieber, Cindy Crawford, Mindy Kaling, David Beckham, Malala Yousafzai and more.

The reunion begins streaming on May 27 on HBO Max.

Beyond Nostalgia: Why the “Friends” Reunion Is More Important Now Than Ever