Cher at 75: Looking Back on Her Legendary Life and Career by the Numbers 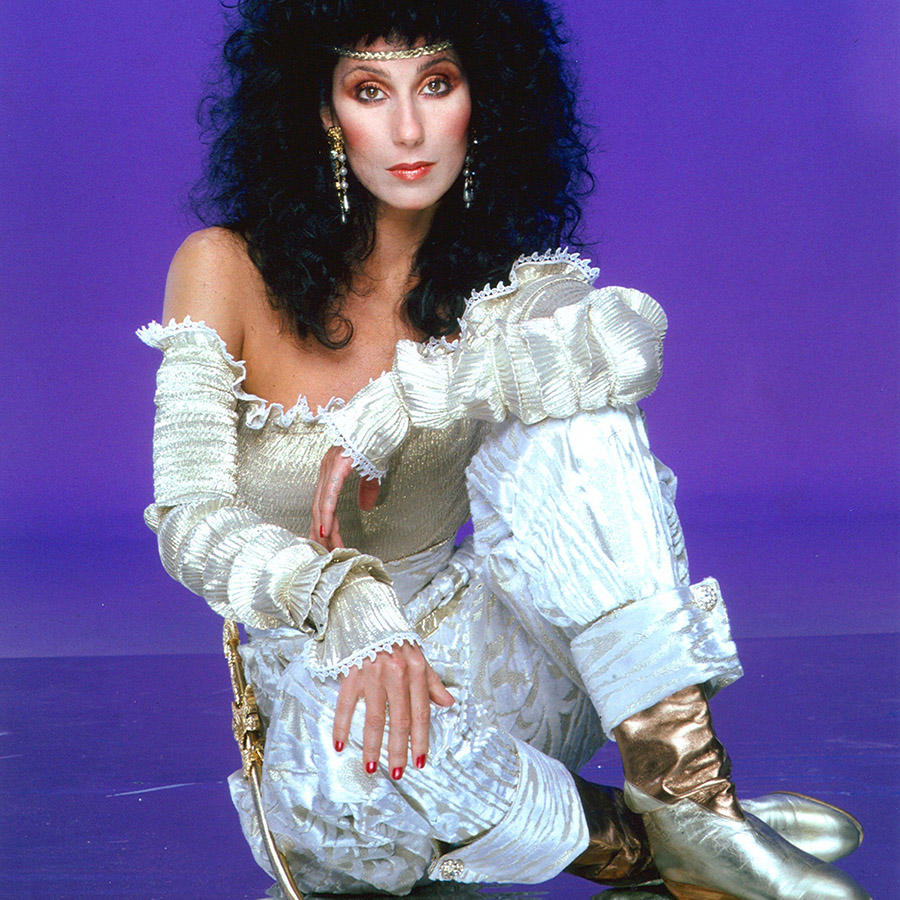 Singer and actress Cher, pictured above in 1981, remains as relevant today — her 75th birthday — as ever. Photo: Harry Langdon / Getty Images

The award-winning singer, actress and activist Cher began her rise to stardom at age 19 in 1965 as one half of the singing duo Sonny & Cher, before eventually venturing out as a solo star and earning the moniker “Goddess of Pop.”

Her life and career has been varied, from endless ‘farewell’ tours to hit songs; from roles playing an unconventional single mother in the beloved coming-of-age movie Mermaids to appearing as herself on the sitcom Will & Grace. And she has, in recent years especially, used her celebrity to raise awareness for political and animal rights issues. Turning 75 this week, she’s testament to a life well-lived (with more wigs than Moira Rose).

“People applaud when I say I’m 73,” became Cher’s signature line on a recent world tour. “I just have one question: What’s your granny doing tonight?”

And the day before she turned 75, Cher shared news about one of her next major projects — a biopic about her life. In a tweet posted yesterday, she announced that the team behind the ABBA-themed movie-musical Mamma Mia! and its sequel Mamma Mia! Her We Go Again (the latter of which she co-starred in as Meryl Streep’s mother) will produce the film, while Oscar-winning Forrest Gump screenwriter Eric Roth (who also wrote A Star Is Born and the 1987 Cher thriller Suspect, among other films) will pen the script.

That’s a heck of a 75th birthday gift. But, of course, age ain’t nothing but a number, as the saying goes. So as Cher marks a milestone birthday — and remains as relevant as when she hit it big in the ’60s — we revisit her life and career by the numbers.

Cher: By the Numbers

6: Decades of superstardom covered in The Cher Show, the popular jukebox musical based on the life of Cherilyn Sarkisian La Piere Bono Allman — or as she’s more simply known: Cher. The performer is also among the few artists to have a #1 single on the Billboard chart in each of the past six decades.

3: The number of weeks that the 1965 Sonny & Cher hit “I Got You Babe” spent atop the U.S. Billboard charts. It also hit number one in other countries, including Canada, and, as the first single from the duo’s first album, helped solidify the pair as a musical force to be reckoned with.

100: Episodes of The Sonny & Cher Show and The Sonny and Cher Comedy Hour, the Emmy-nominated musical variety series she co-hosted in the ’70s that built off her musical success with Sonny Bono and helped make her a household name.

26: Studio albums, 10 compilations, four soundtracks, 82 official singles (like the disco-retro anthem “Strong Enough” and monster ballad “I Found Someone”) and three live albums in the performer’s discography … so far.

53: Years of collaboration with Bob Mackie. The legendary fashion designer first met Cher in 1967 when she was a guest on The Carol Burnett Show (he was responsible for the hit show’s costumes). From the sheer-beaded so-called ‘naked’ dress Cher wore to the 1974 Met Gala (decades later, the show-stopping outfits have been an influence on Rihanna and Kim Kardashian’s similar Met looks, as well as RuPaul) to the showgirl-inspired feathers at the Academy Awards — and all those towering headdresses — their bold and often headline-grabbing work together cemented her fashion icon status and is an indelible part of her cultural legacy. The boundary-pushing style is now an on-stage staple for entertainers from Jennifer Lopez to Demi Lovato.

600: The number of costume changes required in Broadway’s The Cher Show, all designed by Bob Mackie, now 81, (who’s also a character in the musical!) to properly chart Cher’s fashion evolution.

150: The number of real sailors in the audience for her now-famous 1989 music video for “If I Could Turn Back Time,” filmed for the crew aboard the USS Missouri battleship. Initially thrilled by the publicity (and recruitment) value of MTV’s youth audience, the Navy then backtracked because the Second World War vessel hosted the 1945 surrender of Japan in Tokyo Bay and the prancing on deck in fishnets and a G-string was considered unseemly. It has since become one of Cher’s most iconic pop culture moments, in a life full of them.

52: Age of Chaz Bono, Cher’s only child with late ex-husband and former singing partner Sonny Bono (who died following a skiing accident in 1998). She and Chaz made the documentary chronicling his late-2000s transition process called Becoming Chaz. Cher later married musician Gregg Allman, father of her other son, Elijah Blue.

4: Words in Cher’s most cited on-screen catchphrase, “Snap out of it!” It’s from a key scene from her Academy Award-winning performance as unglamorous Italian American widow Loretta, opposite Nicolas Cage, in the quirkily romantic 1987 film Moonstruck. Because of a packed schedule the star had initially passed on the role, which had been making the rounds before being refined and championed by Canadian filmmaker Norman Jewison (according to Iva Levin’s new Jewison biography, Cher had just one day off after wrapping The Witches of Eastwick and beginning production on Moonstruck.

38: Minutes in her “Hot Dance” routine, part of her “Body Confidence” series of CherFitness workout videos. The first instalment alone sold 1.5 million copies in the U.S., when it was released in 1991. Before the pandemic, she was on a grueling tour but there’s no secret to how she stays fit and with enough stamina; she reportedly still works out hard five times a week, doesn’t smoke or drink and eats a plant-based diet.

60: Millions of dollars that Cher was paid to headline a second concert residency at Caesars Palace. The Las Vegas extravaganza featured 14 dancers, 4 aerialists and 17 costume changes, and grossed nearly US$100 million during its three-year run. She was also in her 60s at the time of the residency, which ran between 2008 and 2011.

188: People Cher follows on Twitter, which range from singers Jewel and Katy Perry to former First Lady Michelle Obama. The star tweets regularly to her 3.9 million followers with an unpredictable mix of commentary and inspiration that ensure she’s still part of the cultural conversation. In particular, she weighs in on politics and it’s genuinely unfiltered (at times too quickly, like her now-deleted comment after the murder of George Floyd suggesting she could have saved the man). Her non sequitur observations and greetings often have such a unique all-caps letter (see her biopic tweet above) and number syntax that they’ve even become a way of unpacking current events.

4: Average number of ABBA hits performed on the set list of Here We Go Again, Cher’s recent tour (2018-2020) in support of Dancing Queen, her album that features covers of ABBA songs. It followed her appearance as Meryl Streep’s mother in the wildly popular prequel/sequel musical Mamma Mia! Here We Go Again.

65: The price for a bottle of Cher Eau de Couture, her recent perfume launch that won a 2020 Fragrance Foundation Award. The philosophy behind the scent: “If you smell like dessert men won’t forget you.”

8: How many years Kaavan, the “world’s loneliest elephant,” languished in isolated captivity in a Pakistan zoo. Fans on Twitter made her aware of the elephant’s plight and living conditions as well as the movement to relocate him to a Cambodian wildlife sanctuary. Cher not only responded by spearheading the public campaign, she co-founded the animal rights organization Free the Wild. After several years of pressure the campaign was successful last fall. Last November, during the COVID-19 pandemic, the superstar travelled halfway around the world to join the rescue mission and help relocate him.

The documentary Cher and the Loneliest Elephant chronicles it all on the Smithsonian Channel Canada. Meanwhile, now that Kaavan is safely repatriated to his natural habitat, Cher is campaigning for the release of Lucy, an Asian elephant in her fourth decade of captivity in Canada’s own Edmonton Valley Zoo.

13: Number of seconds that Cher appears onscreen in “All I Know So Far,” Pink’s new autobiographical fairy tale music video. For the female empowerment fantasy, which also features actress Judith Light, Cher makes a cameo as a floating deity (naturally). Cher’s enduring impact continues to transcend age and generations. “She’s been doing this for a very long time and she hasn’t lost her sense of humour. She’s one of my she-roes,” Pink recently said of the singer. “She’s a badass.”

1: The icon is just one award away from achieving the coveted EGOT status, the grand-slam of American entertainment. She’s already got the Emmy (Cher: The Farewell Tour), Grammy (dance album Believe) and Oscar (Moonstruck). All she needs is the Tony, but it’s not a matter of whether she can “Turn Back Time.” We “Believe” it can still happen.

Cher Travels to Pakistan to Celebrate Relocation of Kaavan, the “World’s Loneliest Elephant”

Cher: From Hippie Singer to the Goddess of Pop