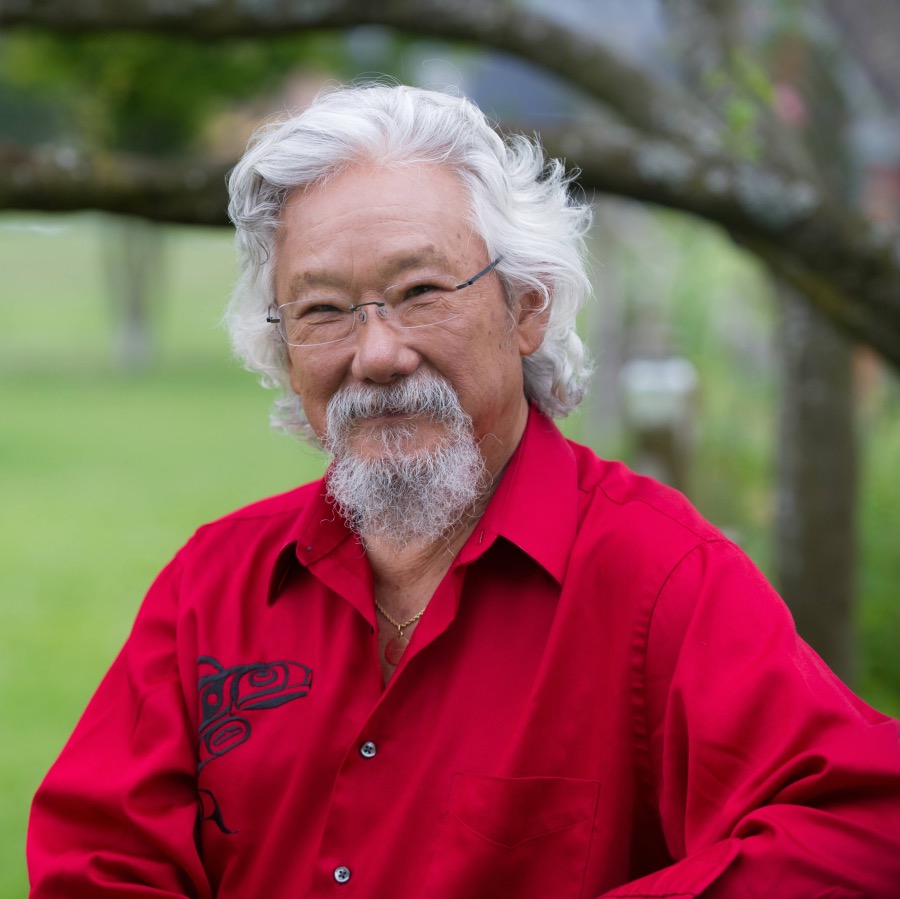 David Suzuki spoke with Zoomer about his life, career and why he hopes the pandemic changes how society treats its elders. Photo: Courtesy The David Suzuki Foundation

Like beer, maple syrup and hockey, David Suzuki is a quintessential component of the Canadian fabric.

As host of the CBC science documentary series The Nature of Things for 42 years — not to mention his other programs before that, including the TV series Suzuki on Science and the radio show Quirks & Quarks — the indefatigable 85-year-old has dedicated more than half of his life to educating Canadians through the media.

And on Thursday, May 20, the Canadian Academy is paying tribute to his life’s work by honouring Suzuki with their Lifetime Achievement Award on the final evening of the Canadian Screen Awards. With the honour, he joins an esteemed list of previous winners that includes Deepa Mehta, Peter Mansbridge, Christopher Plummer and Martin Short.

“It’s an interesting list actually. Of course, it’s a great honour,” Suzuki said recently over the phone from his cabin in British Columbia. He added, with a laugh, that he believes part of the honour “just has to do with being on air long enough to qualify for this,” but that he’s also grateful to CBC for continuing with The Nature of Things and his viewers for continuing to tune in. “If our audience wasn’t any good, we would have been dumped a long time ago. So I think I feel just grateful to the Canadian public that they supported me and the program all these years.”

It’s quite an accomplishment — especially for a television legend who grew up without a television, and whose academic peers originally ridiculed him for taking science to the television airwaves. Suzuki spoke with Zoomer about that, the upcoming theatre production about his life and why he hopes the pandemic changed our attitudes about how society values its elders.

MIKE CRISOLAGO: It’s a no-brainer, to your fans, that you’d receive this Lifetime Achievement honour. But it’s fascinating that a lot of your colleagues in academia originally ridiculed you for starting in television in the first place.

DAVID SUZUKI: Oh yeah. Way back when I did my first television series, it was a local program in Edmonton on a local channel — an eight-part series [on genetics] in 1962. And back then, [television] was regarded in a derogatory way by my academic colleagues who felt I was either on a big trip mouthing off, or I had no business being in there talking about science … So this is why, when I get an honorary degree from a university, I’m really delighted because it’s recognition by my academic colleagues that maybe the work was worthwhile.

MC: What did you see or understand about the power of television that your colleagues didn’t recognize?

DS: The eight-part series on genetics was shown on a Sunday morning at nine o’clock or something. And to my astonishment, after two or three shows, I started to meet people who said, ‘Hey, you know, that was a good show I saw last week.’ And I’m going, ‘What the hell are you doing watching television on a Sunday morning?’ And that’s when I realized, ‘Oh my God, people are watching this thing. It’s a very powerful way of educating people.’ And that’s when I realized that this was a medium for reaching large numbers of people beyond what I would meet in a class.

MC: And now, of course, we’ve swung the opposite way, in terms of having mass information via the internet.

DS: The thing that bothers me is people today … are so overloaded with information, they don’t have to inform themselves, as I thought we were doing on television. They just scroll through the internet until they find something that confirms what they already believe. If they want to believe that climate change is a hoax, it’s on the internet … This is why I went into television in the first place — to get across information so people could make better decisions about the world.

MC: Speaking of the internet, you ventured into another media landscape by launching a podcast last year.

DS: It’s obviously the way a lot of people are going … Now, the young people, they don’t even bother with television — at least the schedule. They’re watching a lot of stuff at different times. But one thing that is coming up is podcasting. And so I thought, my message is so very, very simple. We forget that we are created by the great gifts from nature. And I go through air, water, soil that gives us our food and sunlight that gives us all the energy in our bodies. And it’s a simple message but I wanted to get that out in some way to as broad an audience as possible. I don’t intend to go into regular podcasting, but it was an attempt. Apparently it got a good audience.

MC: And that’s not your only new venture. Tell me about the stage production based on your life.

DS: My wife and I are involved right now in a drama that is based on our life together. And we had a whole theatrical program all scheduled out until COVID hit. We did one [preview] in Vancouver and that’s another avenue to reach a different audience perhaps and touch them in a different way. I think it’s important now that my message on the environment really no longer touches people’s minds only. We have to touch people’s hearts.

MC: Will Canadians get a chance to see this production?

DS: It was done by the Why Not Theatre — a great group. We worked together quite a bit for two years and worked the whole thing out. And according to the audience that we got in our preview, it was very well regarded. So we were prepared to go for a 10-day run in Toronto and a 10-day run in Vancouver before COVID. We’re scheduled right now to film it in September, but we would still love to do a live theatrical production.

MC:  You turned 85 this year and the podcast and play are great examples of how we can keep trying new things and expanding our horizons as we age.

DS: You know, I’ve spent a lot of time with Indigenous people and … the elders are like rock stars. They’re really looked up to from young kids all the way up because the elders embodied their history, their culture, their experiences that are so valuable. And I was shocked to see the statistics on the people that have died from COVID. The great majority of deaths, of course, were elders, but the vast majority of the elders that died were locked away in long-term care units, done for profit — and you know anything for profit means they begin to cut a lot of corners — and these elders died alone and isolated under terrible conditions. And I thought, what a contrast between the way elders are regarded in Indigenous communities.

We don’t value elders. And yet I feel, as an elder, I’ve lived a whole life, I’ve had a lot of experiences and it’s my job now as an elder to sift through my experiences for those nuggets of lessons that are worth passing on to young people. And I just urge elders to do this. Don’t just sit away and kind of vegetate until you die. You’ve got a job to do. But I think we have to provide them the venue.

MC: And you recently had the opportunity, and venue, as an elder, to spend some quality time with the youngest members of your family.

DS: On March 13th, over a year ago now, we happened to be at my cabin, where I am right now, with our daughters and their families, to kick off spring break. And the lockdown order came. Our eldest daughter and her two boys immediately went back to Haida Gwaii before it got locked down, but I stayed here with my wife, with my daughter, her husband, and three toddlers for six months. And I was on the morning shift. Every morning I was up at six. I had to feed, clothe and get [the kids] outside rain or shine. And I’ll tell you, it was the most happy six months of my life because I had the job of caring for three people, human beings, that I dearly love and that I loved going out with and discovering the world through their eyes. And so, as an elder, I had a job to do, and I loved it and I was happy.

And I wonder, with these people that are stuck away in long-term care places, surely we’ve got to find different ways of plugging them back in with young people, giving them some joy and meaning in their lives and a job in their lives. I hope out of COVID we learn to care for our elders in a different way.

David Suzuki receives the Lifetime Achievement Award as part of the final night of the 2021 Canadian Screen Awards on Thursday May 20. The event will stream live on Academy.ca as well as the Academy’s YouTube and Twitter channels beginning at 8 p.m. ET.