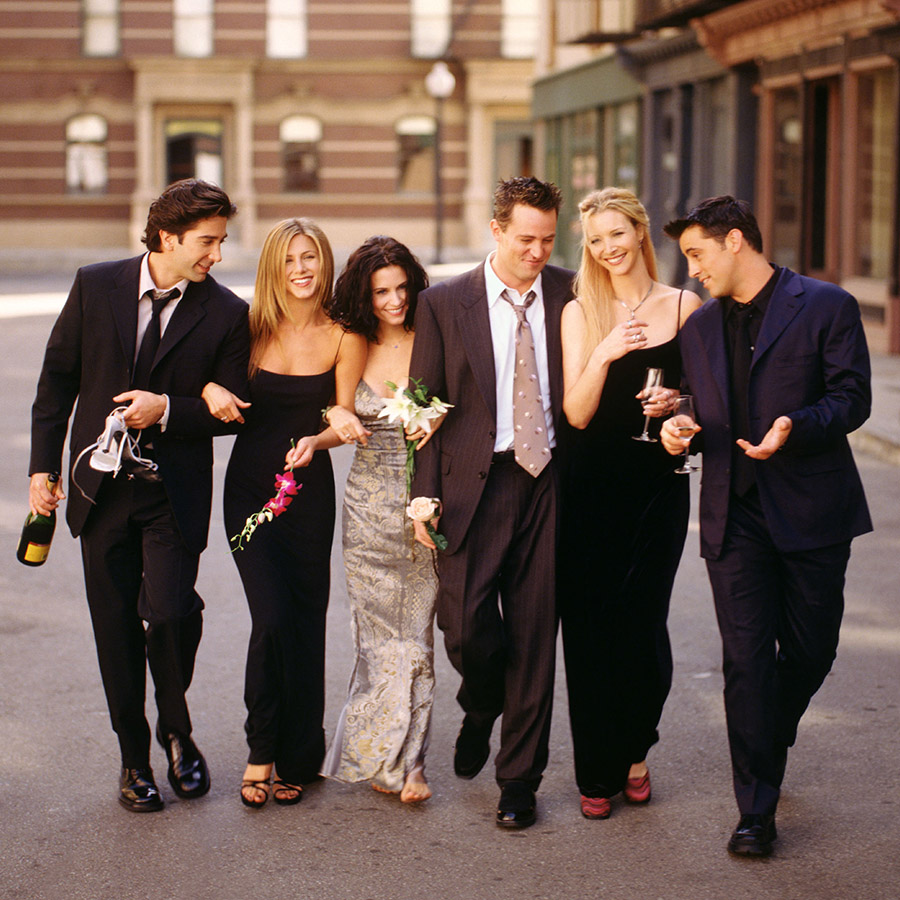 With the Friends special — “The One Where They Get Back Together” — premiering today on HBO Max, we look at why the reunion show (and the pandemic timing of it) is so meaningful for longtime fans.

They were on a break! But now, they’re back.

The news of the long-awaited Friends reunion special on HBO Max dropped on May 13, delighting fans who’ve been anticipating the event that was originally slated for 2020 but pushed back by the pandemic. Dubbed “The One Where They Get Back Together,” the Friends cast shared the first trailer for the special on Instagram that day, which features all six leads walking arm in arm on their former studio lot to a slowed-down version of the sitcom’s music that almost brings a tear to the eye.

A week later, the full trailer for the special, which begins streaming on May 27 on HBO Max. got fans hyped even more.

Jennifer Aniston, 52, David Schwimmer, 54, Courteney Cox, 56, Lisa Kudrow, 57, Matt LeBlanc, 53, and Matthew Perry, 51, all returned for the special, which finished taping on the old Friends sets in April according to the show’s Instagram account.

As well, the cast visits the sets from the series, including both main apartments, the Central Perk coffee house and the fountain from the opening credits, while recreating famous moments from the show. In addition, they read from old scripts and discuss their experiences from the show’s original 1994-2004 run. At one point, interviewer and Late Late Show host James Corden asks the cast if Ross and Rachel were, famously, “on a break.”

But while the tinge of nostalgia is, admittedly, intoxicating, the Friends reunion means so much more than just a sepia-tinted trip back to the days of “the Rachel” haircut and ’90s fashions.

Why We Need the Friends Reunion Now More Than Ever

To start, the real significance of the Friends reunion is laid out in the show’s famed theme song:

When it hasn’t been your day, your week, your month or even your year …

(When the rain starts to pour)

(‘Cause you’re there for me too)

The pandemic ensured that this year, and last, has been nobody’s year. Some jobs became a joke during lockdown, many are broke because of it, and countless love lives are DOA thanks to pandemic isolation.

For that reason, the year delay in the Friends reunion was, perhaps, fortuitous.

To start, while Friends originally aired from 1994-2004, it never really left. The fandom endured through syndication reruns and, when the show landed on Netflix in 2015, it quickly became a staple of binge-watching sessions among not just older fans who enjoyed its original run, but also among millennials and gen-Z fans discovering it for the first time.

Sure, a part of it is the ongoing fascination with ’90s nostalgia. But when ABC News interviewed younger fans watching it for the first time in 2019 around the show’s 25th anniversary, they reported that, “some fans said [Friends] is a piece of the past that allows them to fantasize about their future. They swoon at the notion of living in a big-city apartment with their best friend the way Courteney Cox’s Monica and Jennifer Anniston’s Rachel do, with two more friends across the hall like Matthew Perry’s Chandler and Matt LeBlanc’s Joey.”

And Jennifer Aniston, when discussing the renaissance of Friends — or “Friends-assance” with People magazine in 2017, noted that, “What I kind of feel is quite comforting is that it’s actually speaking to people today, when so much has changed in terms of technology and how far we’ve come — that Friends is still relatable in the sense that there were no cell phones, it was just friends sitting, communing together.”

Friends just sitting and communing together? It’s such a quaint, yet seemingly distant, notion during a pandemic, when many of us haven’t seen our friends in person for more than a year. So sitting with them? Not unless we’re outdoors, masked and six feet apart.

And that’s why the Friends reunion is even more powerful now than it may have been if it had materialized in 2020 — or not during a pandemic at all.

Friends is routinely mentioned as one of the most popular shows for people to binge watch during the pandemic. And if it was aspirational before — “Maybe I could live in a cool New York apartment and hang out at a hip coffee shop with my attractive friends!” — then it’s become a downright fantasy under the shadow of COVID-19.

“I mean, we’re basically exhausted all the time because we’re under the stress of uncertainty. So what do I want to watch that will give me some comfort and some rewards that’s easy, that doesn’t drain my energy but gives me some back?” media psychologist Dr. Pamela Rutledge told NPR of the popularity of bingeing shows like Friends and The Office last year. “And so we’re really looking for something that we can enjoy … that’s going to actually reinforce or relax or allow us to escape and give us a little bit of a vacation rather than tax our brains.”

Friends helped so many people — myself included — navigate the fear and isolation and uncertainty of the pandemic. The familiar faces, classic jokes, and depiction of life during “normal” times proved food not just for the funny bone, but also for the soul.

But beyond that, it also reminded us, perhaps even just subconsciously, of why we’re struggling through the stress of lockdowns and isolation and constant mask-wearing and hand-sanitizing; we’re doing it so that, one day, we can reunite with our loved ones in a coffee shop, or at a pal’s apartment, or around the Thanksgiving table.

I mean, who among us wouldn’t gobble down a plate of Rachel’s botched English trifle (“It tastes like feet!”), listen to Ross give a boring museum lecture, or sit through Joey Tribbiani’s “uneven performance” in the off-Broadway play Boxing Day if it meant that we were among friends and family again?

And that’s the beauty of the timing of the Friends reunion. The fact that the pandemic delayed it for a year was almost fourth wall-breaking; these friends who we stream and quote 20 times a day couldn’t even get together. Central Perk was presumably doing curbside pickup and lockdown meant Monica couldn’t play host to anyone in her apartment.

But as vaccine rollouts continue and more of us get the jab, the light at the end of the pandemic tunnel grows slowly brighter. And what could be more hopeful, or symbolic, in the pop-culture sphere than seeing the actors who played Rachel, Ross, Monica, Chandler, Phoebe and Joey finally reuniting on the set of a show that gave us such comfort during the pandemic?

If they can safely reunite after the pandemic kept them apart, perhaps it won’t be long before we can see our loved ones too. It’s almost like a Friends Groundhog Day — Joey came out and saw his shadow, so perhaps we’ll be springing from isolation soon, too.

And then there’ll be no need to sit around the house bingeing shows like Friends constantly.

But, of course, we still will. The comfort and joy it provides is not pandemic-dependent.

And besides, that’s what Friends is for.

Way Back When? The ’90s Nostalgia Boom and Why We All Long for a Simpler Time

Halston: Charting the Designer’s Enduring Influence on Fashion and Culture Ahead of His Upcoming Netflix Series