The Juno Awards: From Buffy Sainte-Marie to Jann Arden to The Tragically Hip, the Most Memorable Moments From the 50th Anniversary Celebration 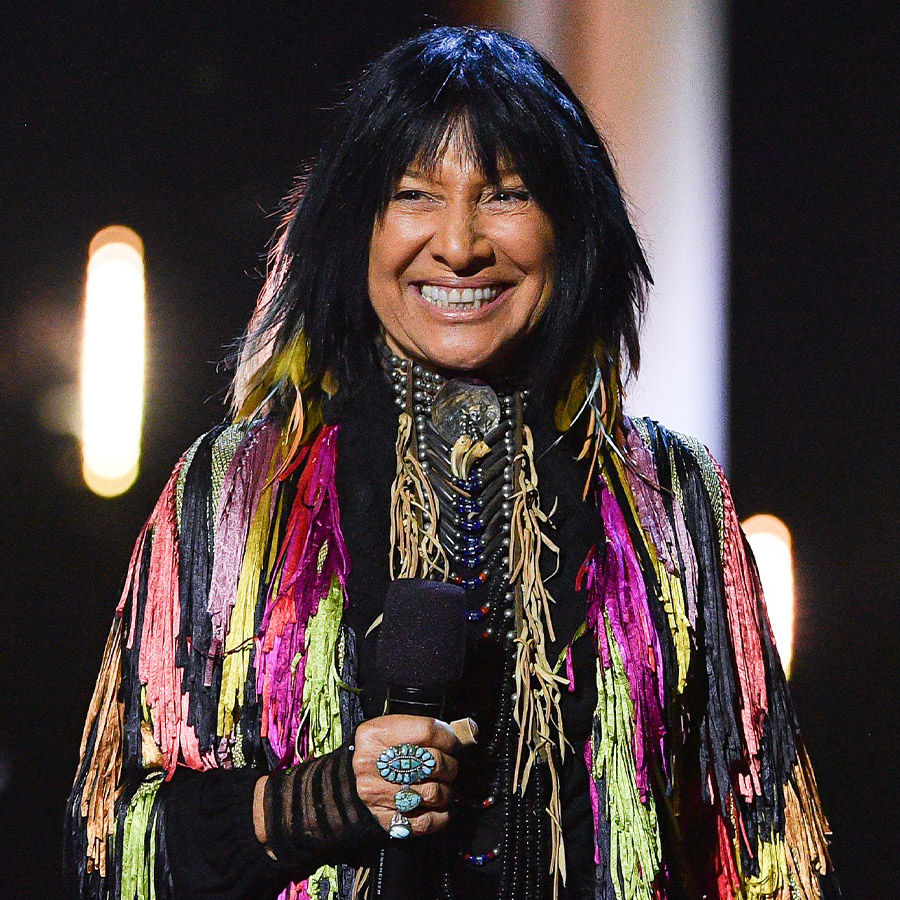 Buffy Sainte-Marie, 80, gave the Treaty and Territory acknowledgment at the 2021 Juno Awards, a tradition she herself had begun with the 2017 Junos broadcast (above). Photo: George Pimentel / Getty Images

The 50th anniversary Juno Awards finally took place Sunday night after being twice delayed by the pandemic. The event was a live/remote hybrid beamed in from locations across the country and Los Angeles, with six awards being presented following the bulk of awards getting handed out Friday night in a pre-broadcast industry event.

One of those included the award for International Album of the Year, which went to British pop superstar Harry Styles for his album Fine Line. Styles sent in an acceptance video (something many Canadian winners didn’t do) in which he thanked the Junos and congratulated them on their 50th anniversary.

The appearance generated a huge amount of attention for the Junos — more than they might otherwise receive in most years — thanks to Styles’ huge and loyal fanbase.  As of this writing, the above YouTube clip of his acceptance speech has received 86,000 views on CBC Music’s YouTube page, which is tens of thousands more than the next highest-viewed video from the night: the Tragically Hip performing with Feist (which currently sits at 36,000 views). The only video from this year’s Junos to receive more views was Justin Bieber’s performance of his single “Somebody,” which sits at 101,000 views.

Styles, however, appeared on Friday night, while Sunday was highlighted by the induction of Jann Arden, 59, into the Canadian Music Hall of Fame, and the Humanitarian Award presented to The Tragically Hip — followed by a performance with Canuck singer Feist, 45.

A Time for Advocacy

Buffy Sainte-Marie, 80, began the ceremonies by giving the Treaty and Territory acknowledgment, a tradition she herself began with the 2017 Junos broadcast. Coming as it does after a week of national mourning and reckoning, Sainte-Marie set a contemplative tone for the broadcast. She joined the voices of many artists who used their turn at the podium on Friday to draw attention to the discovery of the unmarked graves of 215 Indigenous children on the site of the Kamloops Indian Residential School.

“The genocide basic to this country’s birth is ongoing,” she said, “and we need to face it together. And I ask for your compassion.”

The group Crown Lands, from Oshawa, devoted their acceptance speech time on Friday night (they won the award for Breakthrough Group) to call for all residential school grounds to be searched; they also performed their song “End of the Road,” about missing and murdered Indigenous women and girls. Leela Gilday, 47, who won Indigenous Artist of the Year at the pre-broadcast, told her fellow musicians, “This is a time of reckoning.”

Susan Aglukark, 54, picked up the dialogue again Sunday, speaking first in Inuktitut then translated in English, promised that the 215 children found at Kamloops will not be forgotten. She was onstage to present the Music Teacher of the Year award, which went to Nunavut educator Mary Piercey-Lewis.

Rapper Michie Mee, 50, introduced a segment honouring the 30th anniversary of the Rap Recording of the Year category at the Junos. She acknowledged both the country’s pioneers in the genre and the fact that the Junos hasn’t always gotten it right in honouring the art form. As such, this segment was an attempt to set the record straight and highlight some of the pioneers of the Canadian rap scene. The very first Rap Recording of the Year winner from 1991, Maestro Fresh Wes, 53, performed his classic “Let Your Backbone Slide” (from his album Symphony in Effect, which won the Juno in 1991). Others who dropped in to fill out the story included Kardinal Offishall, 45, and Jully Black, 43, as well as members of the new generation of Canadian hip hop artists like Nav and Haviah Mighty. There were also shoutouts to Canadian rap superstars over the years, from Dream Warriors to Drake.

While Stratford’s own Justin Bieber wasn’t actually in the house, he did open the show by performing the tune “Somebody” in his first Junos appearance since 2010. He went on to win Best Pop Album of the Year for Changes (though, like The Weeknd, didn’t appear to accept the award — an odd move given he performed on the show). The superstar now has eight wins out of a career 27 nominations. His albums have sold 75 million copies worldwide, and he is currently the number one artist on the streaming service Spotify.

The Biebs went skater-boy casual for his performance, wearing tan board shorts and a white t-shirt and sneakers. His newly shorn (and somewhat controversial, in an appropriation sense) dreadlocks were replaced by a closely-shaved head.

Jann Arden, an eight-time Juno winner, described herself in typical self-deprecating fashion as “an overweight kid from Springbank, Alberta,” who achieved her wildest dreams as she accepted her induction into the Canadian Music Hall of Fame. The 59-year-old accepted the award after a tribute reel featuring her extraordinary range — from funny lady to heart-touching songbird — and induction by fellow Canuck music legend Anne Murray, 75.

Arden wore a burgundy swing-style coat dress with a honkin’ big belt, black gloves and a platinum bob and quipped: “I think I’m too young, I’m far too young” for a hall of fame nod.

Following her acceptance speech, Arden performed her classic “Good Mother” while surrounded by a montage of images of her own parents.

The Tragically Hip and Feist

The Tragically Hip received the Humanitarian Award, presented by Geddy Lee, 67, and Alex Lifeson, 67, of Rush in a segment taped at Toronto’s historic Massey Hall.

The Canadian Academy of Recording Arts and Sciences cited the band’s “timeless music and philanthropic pursuits” as inspiring generations of Canadians. The band, of course, is known for raising money for Camp Trillium for children with cancer, the Special Olympics and the Unison Benevolent Fund, which provides emergency assistance to people in the music industry. Notably, the Hip’s final tour with their late lead singer, Gord Downie, raised money for the Canadian Cancer Society.

The award also highlighted Downie’s work on his solo project The Secret Path, his multimedia musical project that raised awareness of the horrors of the residential school system in Canada.

A Mixed Bag of Fashion Statements

The remote elements of the show caused fashion to take a back seat this year’s Juno Awards.

Besides Justin Bieber, who went for California casual, most of the participants dressed up. As there was not “red carpet” per se, the artists didn’t get the chance to tout the designers of their outfits.

A standout, however, was Shania Twain, 55, who Zoomed in as a presenter for the Artist of the Year award. She wore a crisp white tuxedo-style jacket with white fringe on top. We, however, won’t ever know what was on the bottom — a very relatable Zoom moment.

Rapper Michie Mee was elegant in a silver sequinned gown with a translucent white evening coat over top, and hip hop star Haviah Mighty wore a high-waisted pantsuit in caramel.

And Feist was stunning in a very simple black dress with red boots and her signature heavy bangs.