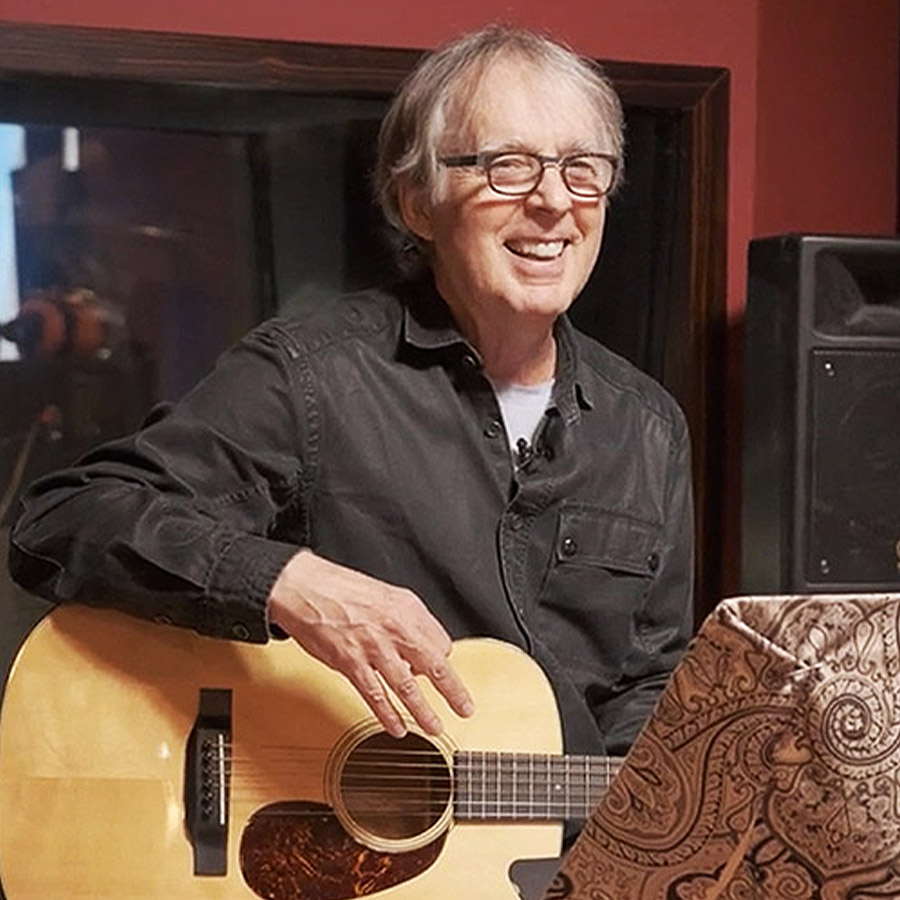 Christopher Ward, 71, pictured during the recording sessions for his new album 'Same River Twice,' which features his own rendition of the hit song he wrote, "Black Velvet." Photo: Teresa Kelly

Christopher Ward’s connection to Canadian music dates back nearly 40 years to the early 1980s, when he served as host of the late night music video program City Limits on Toronto-based Citytv. He eventually transitioned to the fledgling Canadian music station MuchMusic, where he’s commonly cited as Canada’s first veejay.

But while he spent years introducing Canadians to the latest music videos and interviewing some of the industry’s  biggest stars, his greatest success came as a songwriter. In the late 1980s, he penned the now-legendary tune “Black Velvet” after taking a MuchMusic assignment to travel on a Greyhound bus filled with Elvis Presley fans from Toronto to Memphis on the 10th anniversary of Elvis’ death in 1987.

“What I did experience firsthand on that Greyhound bus trip was what he meant to all of those people,” Ward, 71, said recently during a phone interview from his home in Los Angeles. “There were three generations of women who were traveling together on that bus and every year they made that pilgrimage. And I use that word intentionally. It was like going to Mecca in Memphis.”

The Elvis-inspired “Black Velvet” became a smash hit for Canadian singer Alannah Myles — Ward’s girlfriend at the time — after its release in 1990 as the second single off her self-titled 1989 debut album. Myles earned the Grammy Award for Best Female Rock Vocal Performance (1991) and Juno Awards for Single of the Year, Most Promising Female Vocalist and Album of the Year (1990) on the back of the tune. Meanwhile, Ward and the song’s co-writer David Tyson won Junos for Songwriter of the Year and Best Composer (1990).

However, while perennially behind the scenes as a songwriter, the 71-year-old is now stepping back into the spotlight on June 10 with the induction of “Black Velvet” into the Canadian Songwriters Hall of Fame (CSHF).

“Black Velvet is an example of song writing at its very best and Alannah’s sultry vocals took Christopher and David’s Memphis-inspired song to the next level, where one can actually feel the heat,” CSHF executive director Vanessa Thomas said in a statement.

Ward, however, recently took the extraordinary step of recording the tune himself, twice.  One new version, recorded with Serena Ryder and Damhnait Doyle, will be played at the virtual induction ceremony (see video below). But the other version features Ward alone, singing the tune in a slower, bluesier fashion on his new album of original songs, Same River Twice.

Ward recently spoke with Zoomer about the legacy of his tune “Black Velvet,” his love of songwriting and whether or not he himself is a big Elvis fan.

MIKE CRISOLAGO: It’s interesting because you wrote “Black Velvet,” but everyone associates it with Alannah Myles. So by releasing your own version, it’s like you’re covering your own song.

CHRISTOPHER WARD: It is a weird concept, isn’t it? I was enthusiastic at first and then I went, “Oh no, I can’t possibly do this.” Because people are going to listen and set it up alongside what they already know and, in many cases, already love. But the guys I was working with said, “Let’s just see what else we can find in the song that is uniquely yours.” And so I don’t sing like Alannah, obviously, but I tried to bring kind of the storyteller’s vibe to the song. So hopefully that kind of shows a different, more introspective side to the song.

MC: That’s interesting and, to that end, in recording it yourself more than 30 years later, did you find any new meaning in the song that you hadn’t realized 30 years ago?

CW: This is a question that I’ve never been asked. Beyond the initial meaning of the song, what it has now is it has the patina of age. It’s kind of a vintage piece now in some ways, very much like myself. And so that alone is its own story. And all the little things that had to happen for it to fit together to make this success story — that’s kind of what I remember as much as anything else. But also just the musical feeling of it … and there’s a smoky kind of thing about that. So I went back to that sort of roots aspect of the song as well.

MC: Are you a fan of Elvis yourself or was he simply a vehicle for the song?

CW: No. It’s funny. I like Elvis, and his cultural accomplishments are phenomenal when you look back at them. And he was a great singer. There’s much to like, but I’m not a hardcore fan. I came up after that with the Beatles and Rolling Stones and Bob Dylan and pop music. But what I did experience firsthand on that Greyhound bus trip was what he meant to all of those people for whom he was the king.  And it was a powerful phenomenon to kind of be in the stream of, but not necessarily be participating in emotionally. It enabled me to kind of get a 30,000 foot view and write it better, I think.

MC: How does it feel to finally have “Black Velvet”inducted into the Canadian Music Hall of Fame?

CW: Well, it feels amazing. Songwriting is the thing that I love to do the most and to be recognized for that work, it’s incredible. And it’s never too late (for induction).

MC: In terms of songwriting, on Same River Twice you have numerous songs that really evoke an older, wiser, more introspective perspective. Do you find inspiration in different things at this point in your career than when you were starting out?

CW: I don’t think, with songwriting, you can go out and look for a song. I think you have to just be in the right frame of mind to receive it when it comes. As to whether there are different things that attract me, maybe it’s more detailed now. Like … there’s a song, “Sway,” on the record, and it’s really an example of what I try to go for in songs now. It’s a miniature, it’s two people slow dancing in the kitchen at the end of the day. That’s all it is. But over the course of the song, you get a feeling for the connection those people have and how they use a moment like that to reconnect. And how important, how really deeply significant, those quiet moments are in our lives.

MC: You’ve written for so many legendary performers. Is there an artist that you’ve always wanted to write for but you haven’t got a chance?

CW: Well, there was a near miss. Aretha Franklin heard one of my songs and apparently loved it and put it on hold … and was supposedly going to record it and it never happened. And Aretha is no longer with us. That would have been, to me, kind of the ultimate if that had ever happened. But I have had my songs recorded by so many incredible singers and some of them are relatively unknown … So those kinds of things are so rewarding when you come up with an idea and then they sing it back to you and it just sounds like the goddess vocalizing. It’s stunning and it’s very inspiring.

MC: You are often cited as Canada’s first veejay, beginning on City Limits and then on MuchMusic. What are some of your favourite memories are from those early years of introducing Canadians to homegrown artists?

CW: That was just such a rich time for me personally but also for Canadian music overall … And I think also we had the freedom to get behind Canadian acts without worrying about whether that act was going to generate the most number of viewers the minute we put them on air. We were partners in helping to build their careers, is how we looked upon it … And it was so satisfying to be part of those stories.

Same River Twice is available now in stores and online.