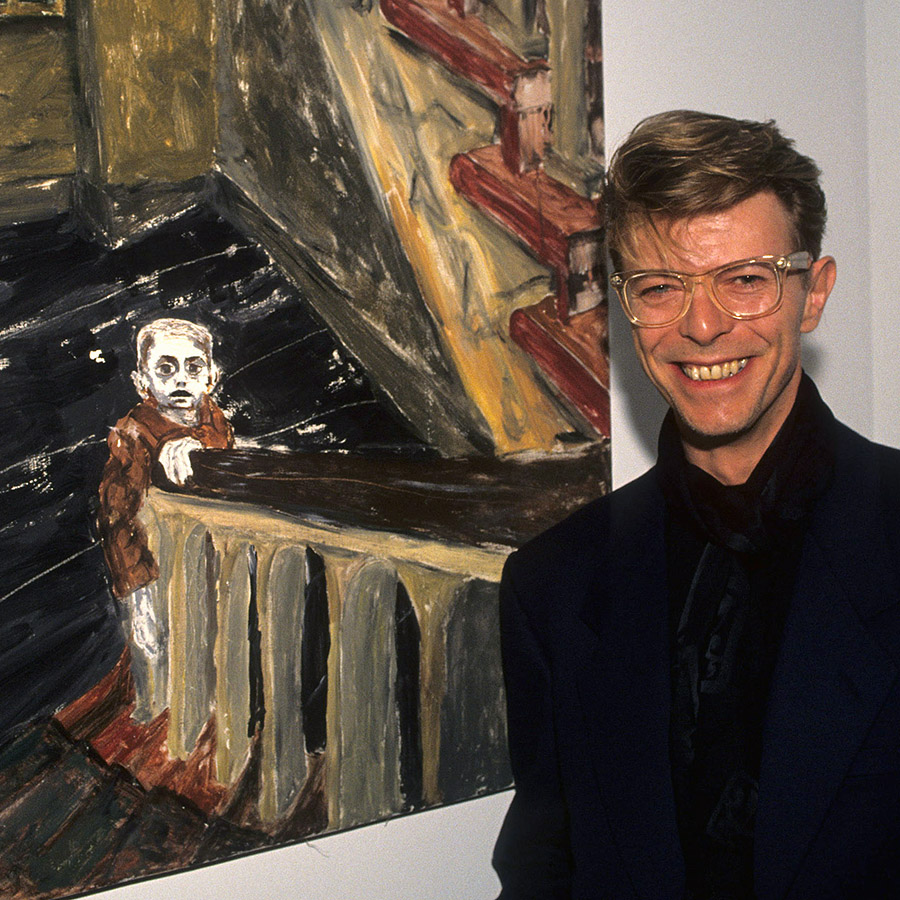 David Bowie and one of his paintings during an Eduard Nakhamkin Fine Arts Gallery event for The American Cancer Society in 1990 in New York. Photo: Ke.Mazur / WireImage / GettyImages

The original buyer, who wished to remain anonymous according to CBC News, snapped up the work of art at a donation centre at the entrance of the Machar municipal landfill in Ontario South of North Bay, only to find out that it was part of Bowie’s D HEAD series, a collection of 47 works that the musician created between 1995 and 1997.

“The sale marks a new global auction record for a work by David Bowie, more than doubling the 2016 sale of a D Head series artwork for £22,500 (approximately $39,000 Canadian) in the United Kingdom,” Cowley Abbot, the president of Cowley Abbott Fine Arts in Toronto said in a news release Thursday.

Cowley, who originally pegged the painting’s value at $10,000, told CBC News his auction house received a call from the lucky buyer after she noticed the label bearing the musicians name along with his signature.

“There’s a label on the back and it quite clearly identifies the work, so she of course wondered if it could be authentic,” Rob Cowley told CBC News.

From there, they determined that the 9.75 by 8 inch piece of art, labelled as a computer and acrylic collage, was very similar to many of the small portraits included in the D HEAD series.

“We also reached out to Andy Peters, who is recognized as an expert in David Bowie’s signature and also has a great familiarity with his artwork as well,” he explained in the same interview.

“He quite enthusiastically, and quite quickly, came back to us … and was able to say that, yes, it is an authentic work by the artist.”

Aside from being one of the most famous rock stars of all time, Bowie,  who died in 2016 at age 69, was also a noted art collector.

In the interview with CBC, Cowley describes the D HEAD piece, identified as XLVI (number 46) in the series, as a “semi-abstract portrait” and calls it “quite striking.

“It’s always exciting when a work like this, by a recognized artist, is found in such a place,” Cowley added of the find.

While rare, Cowley says it’s not unheard of for art by well-known artists to pop up in unexpected places.

“Oftentimes it’ll be collectors,” he says in the CBC story. “It’ll be people who have an eye for art and know art. And so they might be looking through the artwork at Goodwill, and they might see something and realize, ‘Oh, that does look to be an original work or a print that has some value.’

“But sometimes you get these cases where the individual is not a collector and who just sees something that catches their eye, and this was the case here.”

David Bowie and the Soundtrack of a Generation