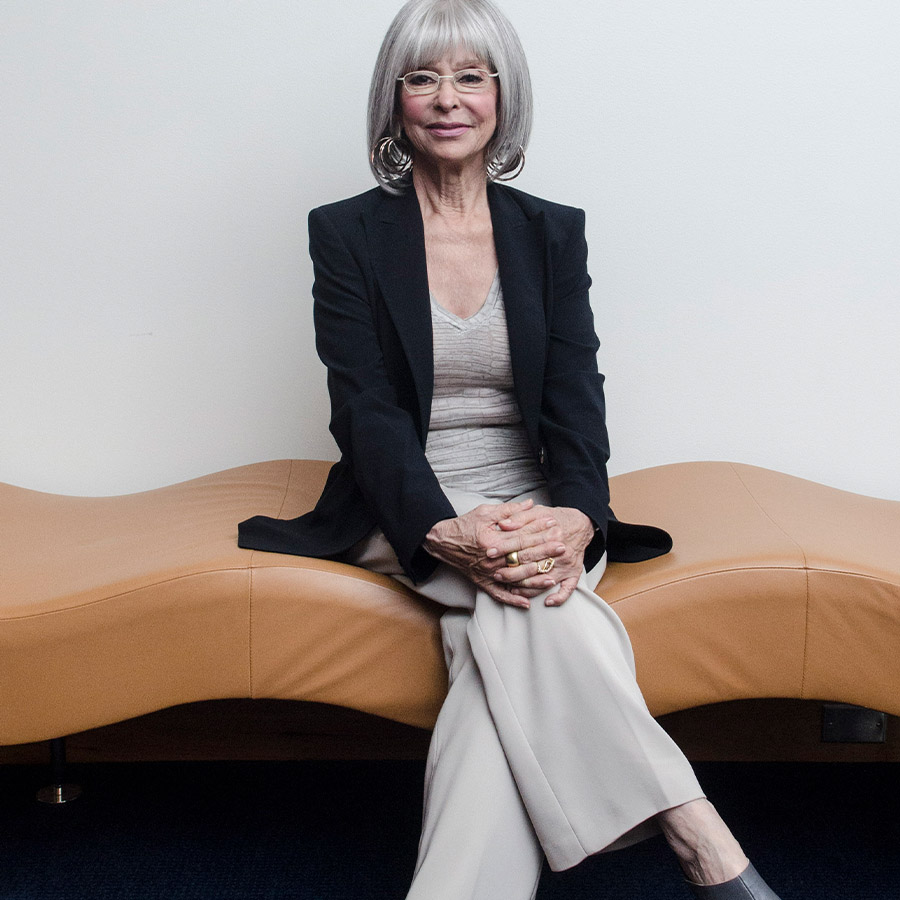 Rita Moreno, seen here in 2014, is the subject of a new documentary about her life and historic career. Photo: Kris Connor / Getty Images

Television was still a novelty in 1944, and it would be another three years before regularly scheduled network broadcasts began.

That, however, didn’t stop Rita Moreno from getting into the act.

The EGOT (Emmy, Grammy, Oscar, and Tony award) winner, who is profiled in the documentary Rita Moreno: Just a Girl Who Decided to Go For It (opening June 18 exclusively in theatres), was just 12 or 13 when she took part in a 1944 TV production.

“I don’t even know what the show was if indeed it was a show,” says Moreno, 89, during a recent phone interview. “This is how long ago it was — it was when you still had to wear purple lipstick because the lights were so bright.

“I went home on the subway with this insanely dark lipstick. I loved being on the subway and having people look at me,” she laughs. “I wasn’t about to take that makeup off.”

Born into a poor farming family in Humacao, Puerto Rico, Rosa Dolores Alverio was just five years old when she was taken to New York by her seamstress mother, while her father and a younger brother stayed behind.

Rita Moreno (she took the surname of her stepfather) started acting professionally at 11, dubbing Spanish language versions of American films. She remembers singing a song during that early television experience, quite likely for the long-defunct Dumont network. (The pioneering broadcaster, owned by a TV set manufacturer and the early home of ‘50s star Jackie Gleason, operated a studio in New York starting in 1942.)

The song she sang was called “Shine” and Moreno, as she proved over the phone, can still sing it:

Moreno shone all right. Breaking into films in 1950, she landed a bit part in Singing in the Rain (1952). Roles got bigger by the time she appeared in The King and I (1956) as Tuptim, one of the King’s wives.

“Any character who had dark skin, I got all those parts,” Moreno told Variety in a 2020 interview. “I could play a Polynesian, East Indian princess, whatever.”

Casting agents at the time saw her mainly as a stereotypical Latin spitfire. But in 1954, Moreno scored an arresting Life magazine cover that was provocatively captioned, “An actress’s catalogue of sex and innocence.” As detailed in the documentary, that was the same year she first hooked up with Marlon Brando. They met on the set of the historical romance Désirée and launched into a torrid, eight-year affair chronicled in Moreno’s self-titled memoir.

As she wrote in that 2013 tome, “Just meeting him that first day sent my body temperature skyrocketing as though I had been dropped into a very hot bath, and I went into a full-body blush.”

Her Oscar-winning supporting role as Anita in West Side Story (1961), however, did not result in a flurry of offers Moreno was willing to accept. The actress was tired of being stereotyped in “spitfire” roles, and it wasn’t until the ‘70s when more rewarding work came her way.

From 1971 to 1977, she shone on the PBS children’s series The Electric Company, picking up a Grammy award for Best Children’s Album in 1972. Young fans loved when she screamed, “Hey, you guys!” at the start of every episode. One of those “guys” was co-star Morgan Freeman.

“Oh, I loved working with him,” she says of Freeman. “We had a super wonderful chemistry.”

In 1977, a guest-starring role on The Muppet Show earned her a Primetime Emmy — giving Moreno the rare distinction of EGOT status (the first Latinx person to achieve the distinction) with her previously-won Oscar (1962), Grammy (1972), and Tony (in 1975 for the Broadway comedy farce The Ritz) awards. She won another Emmy in 1978 for her recurring role opposite James Garner on The Rockford Files.

“Oh Jimmy, my darling Jimmy,” she says of Garner. “I was very close to him. We had a wonderful, wonderful time.”

Moreno also occasionally worked in Canada, headlining as a singer/dancer in the late- ‘70s/early ‘80s at the Royal York Hotel’s Imperial Room.

“I had three boy dancers,” she says looking back at her Toronto bookings. “I realized early that having young men dancers in your life is like running a kindergarten. You’re picking up their socks… it’s not necessarily fun all the time.”

While there were lean times, Moreno never stopped working. She made numerous guest appearances in the ’80s and ’90s on shows such as The Love Boat, The Cosby Show, The Golden Girls, The Nanny and Miami Vice. She even had a recurring role as ”Sister Pete” on the gritty HBO drama Oz.

In recent years, Moreno has added to her trophy collection, including the Presidential Medal of Freedom, a Kennedy Centre Lifetime Achievement Award, and a Peabody Career Achievement Award.

The Peabody also makes her a rare “PEGOT” winner, and she says she keeps the awards on display in her Berkley, Calif., home.

“I’m one of those extremely fortunate people who has a beautiful home at the top of hill, and I can see all of the bridges and the homes and the sunsets.”

She says all these trophies give her great satisfaction, “until I’m out of work and then I say, ‘How come I’m not working?’”

Though thankfully, she has not said that lately. From 2017 to late last year, she co-starred as retired singer-dancer Lydia on the remake of Norman Lear’s comedy One Day at a Time.

“I just love playing her,” says Moreno of the Cuban grandmother. Working with Lear, who turns 99 in July, “is the joy of my life,” she adds. “I’m so pleased and proud to actually be a part of something he gave birth to.”

Another Hollywood icon she has worked with in recent years is Steven Spielberg. The Oscar-winning director cast her in his remake of West Side Story, which will open on cinema screens this December after a year-long pandemic delay. “I talked to Steven and he said, ‘I will not stream this movie. You can’t do that.’”

The role was written especially for her by Angels in America scribe Tony Kushner. “Her name is Valentina and it’s not a cameo,” Moreno says with pride. “It’s a real part.”

You would think being cast in a reboot of an Oscar-winning, Best Picture winner 60 years after it made her a star would be a fine career capper for Moreno. But no. Bite your tongue and bring on the work.

The actress, who has battled racism and gender barriers her whole life, will not compromise now when it comes to ageism.

“One of the problems is that older actors are not considered for regular roles,” she says. “It always has to be an older person. Actually, it doesn’t have to be. If you are a wonderful actor, you should be able to play almost any part. Why not? Nobody thinks of that ever.”

Just as they don’t think of Moreno as turning 90 this December.

To what, then, does she attribute her youthful vigour?

“Oh, I think it has everything to do with genes,” she says.

Genes, and perhaps patience. Last year, Moreno told a story at a One Day at a Time press conference of meeting Norman Lear for the first time. She was in her mid-60s and auditioning to play the wife of the late actor Charles Durning for a TV series that was never picked up.

“I’m one of those people who never really looked her age,” she said. Lear asked, “What the hell are you doing here?” Moreno explained she was there to audition. And he said, “Rita, you could never be Charlie Durning’s wife.”

At that point, Moreno had not worked for two years, “and I was absolutely alarmed. And I said, ‘Why?’ And he said, ‘You could never be Charlie Durning’s wife. You don’t look like you could be his age.”

She tried to explain she was 66. “He said, ‘No, no, dear…It doesn’t matter. Get the hell out of here.’ He said that in the sweetest, dearest way.”

Moreno went to her car, “opened the door, sat down and wept for two hours because I couldn’t get a job.”

Twenty-one years later, Lear hired her for One Day at a Time. As she says, “I can’t believe what a trajectory this outrageous career has taken.”

Rita Moreno: Just a Girl Who Decided to Go For It opens in theatres across North America on June 18. The documentary, which premiered earlier this year at Sundance, will eventually be shown on PBS as part of its American Masters series. “Mank,” “The Dig” and Hollywood’s Ongoing Problem With Aging Down Female Characters