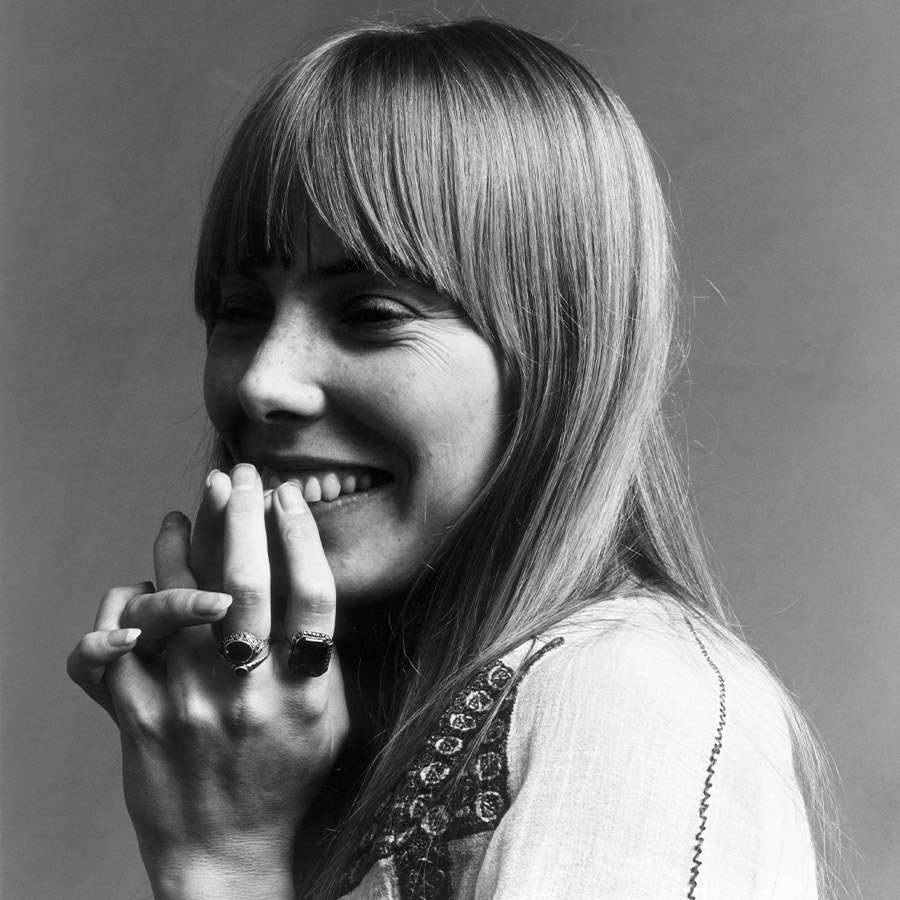 Joni Mitchell during a photoshoot for Vogue in 1971 — the same year she released her classic album 'Blue,' which turns 50 today and is ranked by many as one of the greatest albums of all time. Photo: Jack Robinson / Hulton Archive / Getty Images

Joni Mitchell released a rare video message via Twitter today to thank her fans for celebrating the 50th anniversary of her classic album Blue.

Sitting at a table outdoors, Mitchell delivered a brief message, noting, “I’m so pleased with all of the positive attention that Blue is receiving these days. You know, when it was first released it fell heir to a lot of criticism. So 50 years later people finally get it [Laughs] and that pleases me. Thank you.”

“Truth and beauty. That’s what I hope to deliver.” It’s what legendary Alberta-born singer-songwriter Joni Mitchell, 77, told filmmaker Cameron Crowe in a rare interview for the Los Angeles Times when discussing the 50th anniversary of her masterpiece, Blue.

The album, released June 22, 1971, was written and recorded after Mitchell — then only 27 — broke up with musician Graham Nash. And that event, along with other relationships — including with James Taylor, who contributed instrumentals to multiple tracks —  formed the basis for the songs that mine the depths, intimacies and sorrows of love.

According to Mitchell’s website, the tracks include a recording of “River” featuring French horns; demos of “A Case of You” — featuring alternate lyrics and “California”; an unreleased studio recording of “Hunter” — which Mitchell played live but never officially released on an album until this EP; and an early version of the tune “Urge For Going” — which she wrote in the ’60s, recorded during the Blue sessions but didn’t release until a year later.

As well, the website notes that, “The striking cover of the Blue 50 EP features the original Blue colour treatment with a previously unseen alternate photo of Mitchell by Tim Considine from the same session as the original.” Fans can purchase the EP online or listen to the tracks on Mitchell’s YouTube channel below.

Blue is often heralded as one of the greatest albums of all time. In 2017, NPR named it as the greatest album by a female artist ever, adding, “With the counterculture collapsing under the weight of its machismo-driven mythologies, women pushed forward with calls to imagine genuine equality in real life — in the private places where love and art is made. Blue articulates that demand and its effects more clearly than any other work of art.”

And Crowe himself noted, in his Los Angeles Times interview, that, “Blue would become a watershed moment in modern songwriting … The intimate tone and the raw nature of the songs would later give permission to other songwriters to go deeper with their work. From John Lennon to Prince to Phoebe Bridgers and just about any songwriter who picks up a pen, the ripple effect continues to this day.”

“I’m always so moved when people tell me how the music has affected them,” Mitchell told Crowe. “It’s amazing to me that after everything, in spite of the criticism, that the intimacy paid off big time. It really did help people face their own intimacy.”

Not only that, but a number of music greats recently spoke with the New York Times about the influence of the album on their lives and careers. Rosanne Cash said that, “I probably would not be a songwriter had it not been for Blue.” Brandi Carlile, a friend of Mitchell’s, recalled hearing the album for the first time and how “it was really profound for me … I was having to re-evaluate what I thought ‘feminine’ meant. And that being tough is being vulnerable and expressing yourself, even things that are really hard to say.” Bonnie Raitt said that, “I can’t think of another piece of music that touches me in the same way.” Chaka Khan noted that, in the depths of depression and suicidal thoughts, “The song “Blue” was another lifesaver for me.” And fellow Canuck Rufus Wainwright added that, “each (Mitchell song) is its own wild journey … And arguably, “Blue” is one of the summits.”

And pop superstar Taylor Swift — who has drawn comparisons to Mitchell for her own songs that focus on love and heartbreak (and was once rumoured to play her in a biopic) — has called Blue “my favourite album of all time” because “it explores somebody’s soul so deeply.”

Mitchell, however, told Crowe that, despite the critical acclaim the album receives today, “Blue came out of the chute with a whimper” and elicited a negative reaction from male singer-songwriters.

“I couldn’t tell what I had created,” she explained. “It was kind of like Dylan going electric. They were afraid. Is this contagious? Do we all have to get this honest now? That’s what the boys were telling me. ‘Save something of yourself, Joni. Nobody’s ever gonna cover these songs. They’re too personal.’”

History, of course, proved that prediction wrong. In fact, Mitchell’s own website lists all the songs she’s written that other singers have covered. And of the 174 tunes listed, all 10 tracks from Blue landed in the Top 45 most covered Mitchell songs — from “River” (second, with 792 covers) to “A Case of You” (fourth, with 431 covers) to “All I Want” (seventh with 154 covers). All told, the songs on Blue have been covered a combined 1853 times.

That said, the emotional drain of pouring her soul into the album did take a toll. Mitchell told Crowe that the recording sessions for Blue were the only ones that she “locked the door” for.

“I felt I was in a very vulnerable place,” she said, adding that she had a dream in which she was “just a bag of human organs with a heart beating in the centre … I felt exposed.”

Today, Mitchell is rarely seen in public. She suffers from a skin condition called Morgellons disease, which she described to the Los Angeles Times in a 2010 interview:

“Fibres in a variety of colours protrude out of my skin like mushrooms after a rainstorm … Morgellons is a slow, unpredictable killer — a terrorist disease: it will blow up one of your organs, leaving you in bed for a year. But I have a tremendous will to live.”

She noted, in that interview, that she planned to put music aside “to battle for Morgellons sufferers to receive the credibility that’s owed to them.” Then, in 2015, she suffered a brain aneurysm that forced her to learn to walk again.

“I came back from polio, so here I am again, and struggling back. Just inching my way along,” Mitchell said in an interview in The Guardian in 2020, referencing how she had to learn to walk again at age nine after battling polio. “I’m showing slow improvement but moving forward.”

She’s also said that she’s unlikely to sing again, and told Crowe that, following the aneurysm, “I have no soprano left, just a low alto.”

But physical struggles aside, at 77, the singer-songwriter told Crowe that she’s the same person today that she was when she wrote and recorded Blue 50 years ago.

“It’s all still very present for me. I mean, I’ve changed styles and things, but not the core of who I am, ever. My old friends see me as being the same as I was when I was a teenager, and so do I.”

Though she keeps a low profile, Mitchell did attend a star-studded 75th birthday bash in her honour in 2018 — a concert that included covers of her tunes by the likes of James Taylor, Emmylou Harris, Norah Jones, Seal, Chaka Khan, and Canadian musicians Diana Krall and Rufus Wainwright.

And this past May, Mitchell popped up at legendary music producer Clive Davis’ virtual Grammy party, appearing via Zoom to discuss her career and musical legacy.

To that end, Blue 50 (Demos & Outtakes) represents part of a larger October 2021 release called Archives Volume 2: The Reprise Years (1968-1971) — a limited edition five CD or 10 LP set that “follow(s) Mitchell in real time through one of the most creative periods of her career” and includes unreleased recordings, live performances and demos from her first four albums, as well as an illustrated booklet of “many unseen photos from Mitchell’s personal collection” and “new liner notes featuring conversations about the time period” between Mitchell and Crowe.

And while previously unreleased tracks and demos are likely the closest her fans will get to a “new” Joni Mitchell musical release, Crowe, in his Los Angeles Times story, recounted another night this past May, at Mitchell’s home, when Elton John, Brandi Carlile and other musical pals joined her for a “Joni’s Jam” jam session.

Mitchell, he noted, enjoys the in-person musical interludes with a close circle of friends and, on that night, amazed them when she, in an impromptu moment, joined in to sing her song “Carey.”

“The spirit moved me,” she quipped to Crowe afterward. “I forgave myself for my lack of talent.”

Original Recordings by Joni Mitchell, Aretha Franklin and Others Destroyed in Fire

Rare Book By Joni Mitchell to Get Wide Release in October