The Beatles: 5 Fascinating Facts About Peter Jackson’s Upcoming Fab Four Documentary, ‘Get Back’ 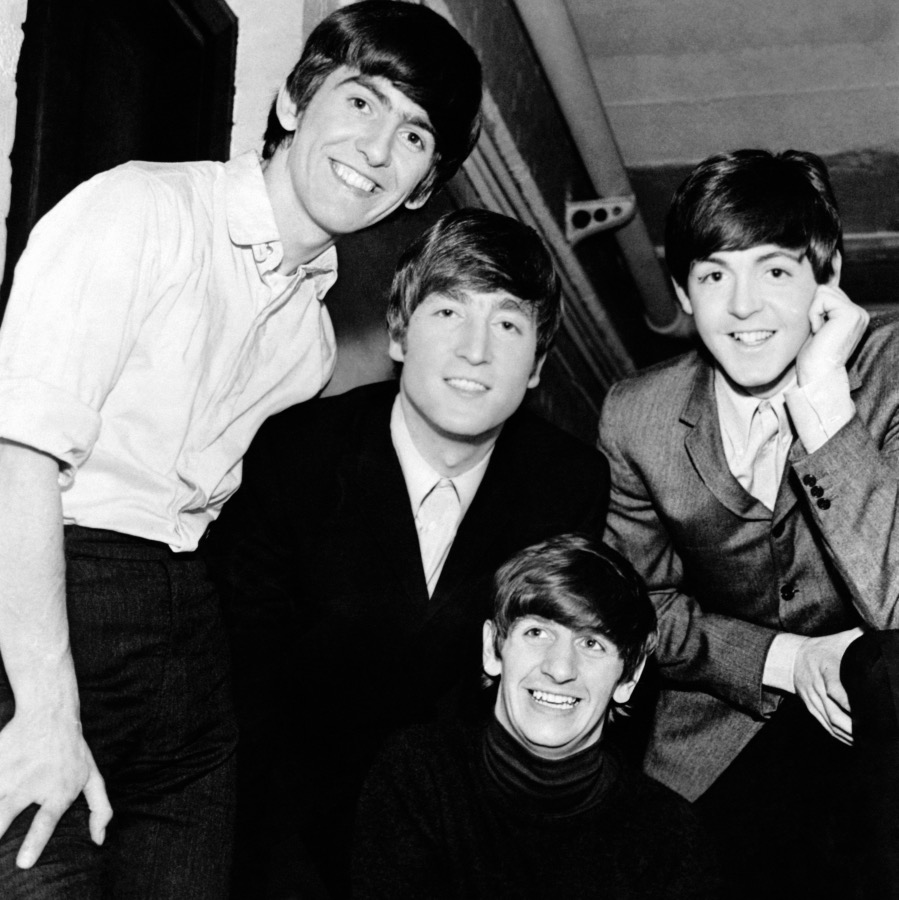 The new Fab Four documentary, 'The Beatles: Get Back' features hours of previously unseen footage from the period, including their entire legendary 43-minute rooftop concert — filmed during the recording sessions for the album 'Let It Be.' Photo: Mondadori Portfolio / Contributor / Mondadori Portfolio Editorial via Getty Images

Imagine the scene: you’re walking down London’s famed Savile Row on January 30, 1969, and, suddenly, on the breeze, you hear voices and music that sound like the Beatles. In the decades before walkmans, iPods, or Spotify, there was only one explanation: look up.

On that date, the Fab Four played their final live gig together, on the roof of their record company — Apple Corps — headquarters, jamming to tunes including “Get Back,” “One After 909” and “Dig a Pony,” which appeared on the Let It Be album they were recording at the time.

The Beatles’ rooftop concert proved a seminal moment not just for the band, but also for popular culture itself. And 52 years later, that image of John, Paul, George and Ringo belting it out with the wind in their hair still captures the imaginations of Beatles fans.

The scene also provides the centrepiece for the hugely anticipated upcoming documentary The Beatles: Get Back, by three-time Oscar-winning Lord of the Rings director Peter Jackson.

The documentary follows the band during a 21-day period during which they recorded their final studio album Let It Be (Abbey Road was recorded after Let It Be but released first). Aside from featuring the full rooftop concert for the first time ever, Get Back also features the only substantive footage of Beatles recording sessions ever filmed.

Originally slated for a 2020 release, the pandemic bumped the film’s theatrical release to August 2021 — though fans received a special five-minute sneak peek at the film last December (see video below).

Earlier this month, however, Walt Disney Studios announced that it would eschew a theatre release and, instead, release the six-hour documentary across three nights, Nov. 25, 26, and 27, on Disney+. And, just last week, Vanity Fair published an inside look into the making of the film, revealing even more details about it.

So, for Global Beatles Day, we’ve collected everything we know so far about The Beatles: Get Back, from how the surviving band members feel about it to the never-before-seen historic rooftop footage about to be revealed to the world.

How Peter Jackson Got the Directing Gig

It’s amazing how a film about the First World War led to Peter Jackson, 59, helming a documentary about the Beatles.

According to the Vanity Fair story, execs at Apple Corps were so impressed with how Jackson restored 100-year-old footage of the First World War for his 2018 film They Shall Not Grow Old, they asked him to help them do the same of old archival Beatles footage for a travelling exhibition about the band. When he asked about the footage, which was originally used in the 1970 Michael Lindsay-Hogg documentary Let It Be, he was told that it was being used for a separate film project — though the director had dropped out. Jackson immediately volunteered and got the gig.

A Beatles fan since his youth, Jackson nevertheless noted to Vanity Fair that he asked to see the footage first before committing. That’s because the Let It Be film was released while the wound of a Beatles breakup was still raw, and many fans dismissed it as a dour, depressing representation of a fractured band on the verge of its demise.

“I was thinking, I’d love to make a Beatles film,” Jackson told Vanity Fair, “but I don’t want to make the Beatles-breakup film. That’s the one Beatles movie I would never want to make.”

But, he noted, once he saw the footage he “was laughing continuously” at the band’s antics and agreed to do it.

The Difference Between the Let It Be and Get Back Films

For Get Back, Jackson mined “over 60 hours of unseen footage (filmed by Michael Lindsay-Hogg in 1969) and more than 150 hours of unheard audio” and discovered a vastly different narrative than the one told in Let It Be.

“I was relieved to discover the reality is very different to the myth,” Jackson said in a press release about the film. “After reviewing all the footage and audio that Michael Lindsay-Hogg shot 18 months before they broke up, it’s simply an amazing historical treasure-trove.

“Sure, there’s moments of drama — but none of the discord this project has long been associated with. Watching John, Paul, George, and Ringo work together, creating now-classic songs from scratch, is not only fascinating — it’s funny, uplifting and surprisingly intimate.”

As seen in the sneak peek video above, the band members clown around and share laughs often. One scene shows the band performing the song  “Two of Us” with John and Paul singing comically through tightly clenched teeth. Later, the duo pretends to act like spoiled celebrities when a recording technician interrupts a take.

Deadline noted that “Jackson is the only person in 50 years to have been given access to these private film archives,” while Cinema Blend lauded what they’d seen so far, noting that “early footage that has been shown almost looks as if it was captured on high-definition cameras in the 21st century, opposed to January 1969.”

The Vanity Fair story added that, to further distinguish his film from Let It Be, Jackson did his best not to use any footage from the first film, including using different camera angles of the same scenes Lindsay-Hogg showed.

“In many respects, Michael Lindsay-Hogg’s remarkable footage captured multiple storylines,” Jackson said in a separate press release. “The story of friends and of individuals. It is the story of human frailties and of a divine partnership. It is a detailed account of the creative process, with the crafting of iconic songs under pressure, set amid the social climate of early 1969. But it’s not nostalgia — it’s raw, honest, and human.”

The director also clarified, in the Vanity Fair piece, that he ultimately has the final say over the end product.

“I have [gotten] no edicts. I mean, nobody from Apple, none of the Beatles, have told me what to do, or none of them have said to me, ‘Don’t show this, don’t show that,’” Jackson said. “I’ve been given no censorship instructions at all. I’ve been left completely alone.”

We Finally Get to See the Full Rooftop Concert

The jewel of Get Back is the fact that Jackson has included the entire 43-minute recording of the Beatles’ legendary rooftop concert. Until now, only individual video clips of songs, like the one below, had been released.

Vanity Fair received an exclusive screening of the concert footage and wrote that the never-before-seen complete cut is “taken from at least nine different cameras, has been scrubbed to astonishing clarity, detail, and colour, a rapturous window in time.”

The story added that “The whole thing — including a comic subplot involving a baffled 19-year-old policeman responding to noise complaints and getting a sly runaround from Apple staffers — forms the climax of Jackson’s documentary, a 21-day diary of the Beatles in their intimate creative world.”

As well, the official Beatles website notes that, as a companion to the documentary, a new book The Beatles: Get Back, will feature “transcribed conversations drawn from over 120 recorded hours of the band’s studio sessions with hundreds of previously unpublished images, including photos by Ethan A. Russell and Linda McCartney.”

The book aims to tell the story of the creation of the Let It Be album through the words of the Beatles themselves, and is being touted as “the first official standalone book” from the band since they released The Beatles Anthology in 2000. The book The Beatles: Get Back is available Oct. 12, and you can watch a trailer for it below.

Get Back Features “New” Beatles Music … Sort Of

While there  aren’t any new Beatles tracks in the film, the 140 hours of audio recordings made available to Jackson for Get Back yielded numerous never-before-released demos and outtakes from the Let It Be recording sessions. And that includes the Fab Four rehearsing tunes that appeared on the solo albums of individual Beatles members following the band’s breakup.

According to a Universal Music release, “Many of the tracks that didn’t make it onto Let It Be were later developed and included on their solo albums, including the Paul McCartney-penned “Teddy Boy”, which appeared on his 1970 debut solo album, McCartney, and George Harrison’s “Hear Me Lord” and “Isn’t It a Pity”, which were later released on his 1970 album, All Things Must Pass. John Lennon, meanwhile, can be heard working on “Gimme Some Truth” and “Oh My Love”, which both appeared on 1971’s Imagine.”

What do the Actual Beatles Think of Get Back?

Both surviving Beatles — Paul McCartney, 79, and Ringo Starr, 80 — have given their seal of approval to the film.

Last year, McCartney told BBC Radio 6 that he originally told Jackson that the film would be boring, “because my memory of the [original 1970] film was that it was a very sad time, and it was a little bit downbeat, the film.” However, the music legend noted, he loved the footage Jackson showed him. “Even though we had arguments, like any family — we loved each other,” McCartney said, “and it shows in the film. It’s a very warm feeling.”

He added, in a 2020 Sunday Times interview, that, over the years, he had “bought into the dark side of the Beatles breaking up and thought, ‘Oh god, I’m to blame.’ I knew I wasn’t, but it’s easy when the climate is that way to start thinking so.” But, when he saw footage from the documentary, “It was so reaffirming to me. Because it proves that my main memory of the Beatles was the joy and the skill.”

Starr, meanwhile, said in a statement that, “I’m really looking forward to this film. Peter is great and it was so cool looking at all this footage. There was hours and hours of us just laughing and playing music, not at all like the version that came out. There was a lot of joy and I think Peter will show that. I think this version will be a lot more peace and loving, like we really were.”

And in an interview with Late Show host Stephen Colbert, he said that the 1970 Let It Be documentary focussed too narrowly on the tension between the band and not enough on the good times.

“You have a row and, okay, it’s over then. You get over it. The best thing that came out of the original documentary was that we played on the roof. And we did this all the time: okay, we’re going to play live … [and] we’d say ‘Yeah, we’ve got to do it in Egypt, with the pyramids. Or up Mount Everest. Or Hawaii in the volcano. Oh sod it, let’s just walk across the road.’”

Colbert, during the same interview, noted that he’d seen parts of the film and that, “It’s going to blow people away and it’s going to change everyone’s thoughts about what the relationship was toward the end of the Beatles for everybody.”