Family Feud: The Rift Between William and Harry — Paused for Diana’s Statue Unveiling — Reveals the Human Side of Royal Life 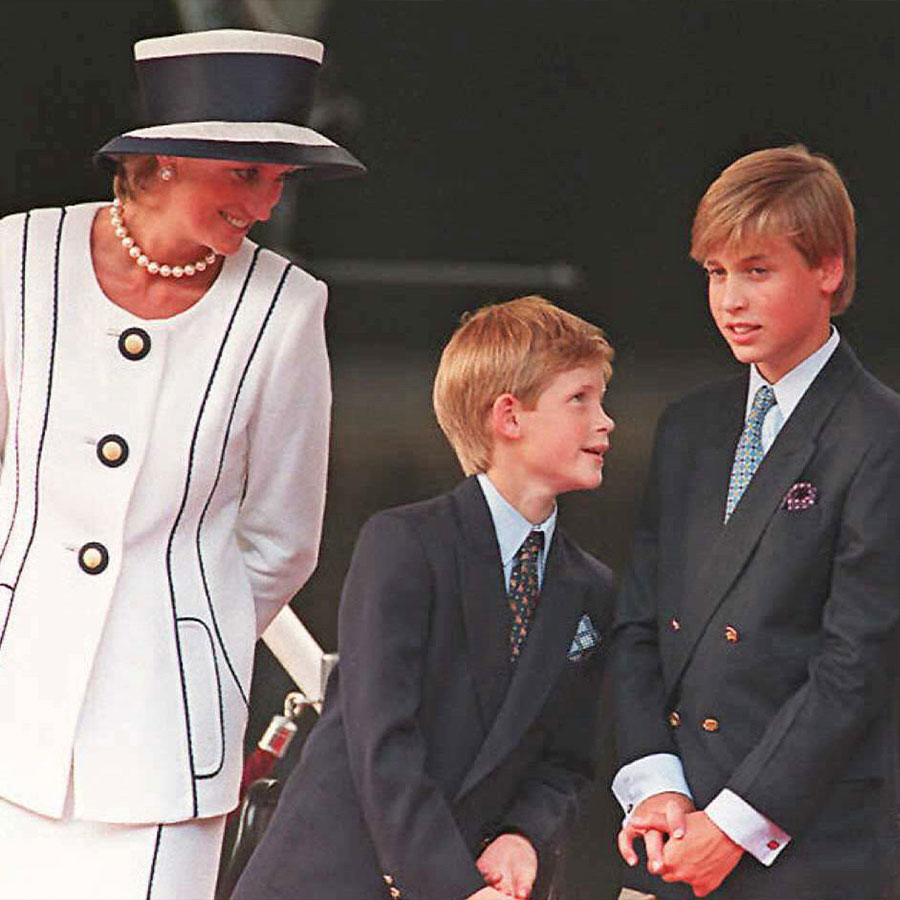 Diana, Princess of Wales and her sons, Princes Harry and William, gather for the commemorations of VJ Day, August 19, 1995, in London. Photo: Johnny Eggitt/AFP/Getty Images

The long-anticipated reveal of the statue tribute to Diana in the Sunken Garden at Kensington Palace yesterday carried the weight of a lot of expectations. In this year of fraught relations between her two sons, much hope was pinned on the potential that reflection on their shared memories of their mother could heal the rift between brothers. By all accounts, the boys were only together a short time, with Harry being chauffeured away 20 minutes after the ceremony following a polite glass of bubbly with his mother’s family.

The public part of Kensington Palace was closed for the day while Diana’s siblings — Earl Spencer, Lady Jane Fellows and Lady Sarah McCorquodale — gathered with the princes to unshroud the monument. Also present was famed British sculptor Ian Rank-Broadley, whom the brothers had commissioned to undertake the monument in 2017, on the 20th anniversary of Diana’s death, as well as garden designer Pip Morrison, who updated the plantings for the occasion.

There is so much of royal life that is completely unrelatable for the rest of us: the tiaras and palaces and gowns and obscure medals and regalia; the vast wealth and calendar of pomp and circumstance; the steady diet of rope lines, ribbon cutting and cake slicing. And, of course, having a statue installed of a loved one in the backyard is not something most of us are going to experience in this lifetime. But what we can all relate to is being forced by rite and ritual to attend a family event where emotions are strained and tensions are held in check for etiquette’s sake. After all, families feud, siblings squabble, harsh things are said and forgiveness is often imperfect or unattainable for all manner of hurts, both real and imagined.

The statue was commissioned by the brothers, and paid for with private donations; those spurned in-laws neither paid for the bronze piece nor attended the unveiling. Photos and video, which included no speeches, were shared only afterwards on the princes’ social media accounts and via favoured press contacts. Diana herself was famous for her feuds, not just with her in-laws and the monarchy itself, but with Elton John and Sarah Ferguson, and her own mother, with whom she was not speaking before her death.

The event was originally planned to be a much larger, public affair: it was scaled down both for COVID reasons and likely because of the state of the brothers’ relationship, made publicly toxic following Harry and Meghan’s Oprah interview in March. Prince Philip’s funeral in April was strained by prodigal son Harry returning to the not-so-warm bosom of his wounded family in the aftermath of the accusations he hurled at the palace gates from afar.

Another “relatable” element of this saga is about what happens to families in divorce. This was not a “royal” event; it was not listed on the rota of official events. Only Spencers were on hand. The wrath of the Windsors for what they perceived as Diana’s public airing of her marriage’s dirty laundry continues to this day. (A bad sign for healing the Harry and Meghan rift, since there are so many parallels between Diana’s 1995 newly infamous Panorama interview and the Oprah special this past spring. Telling one’s truth might be an effective method of creating larger public empathy for one’s cause, but the Crown has always taken a firm line against betrayals, and no one can close ranks more effectively than a family that has oodles of private palaces and an army of courtiers to ensure those gates remain locked.)

Diana was a Spencer in death, as her brother Charles in raw rage and emotion, promised his late sister at her 1997 funeral: “We your blood family will do all we can to continue the imaginative way in which you were steering these two exceptional young men.” He vowed that William and Harry would not be “immersed by duty and tradition,” but would, he said, be encouraged to “sing openly” as Diana had planned. Diana was a Spencer yesterday: her bronze likeness wore neither her famous engagement ring nor was her plaque labelled with the HRH that was stripped from her in divorce.

Those boys, like so many children of so many divorces everywhere, were split like chicken wings by the opposing forces of their warring parents and families. They walk that line to this day. The practice of dividing into factions and taking sides and being wooed and punished in equal measures — all the bloody mess of family conflict — is what William and Harry have known since they were little.

The occasion of Diana’s 60th birthday has revived passions for the Princess of Hearts, beloved the world over. Her sons had said they would not speak publicly about her again after a series of events and documentaries released to mark the 2017 anniversary. Harry, in particular, has been invoking his mother’s name and memory often in the past few years, in the context of fears that his wife, Meghan, would be driven away or harmed by the relentless media attention. The boys are in a difficult position — their mother and the world’s memories of her are at odds with their desire to grieve and remember the private side of her, a side of her that is uniquely their birthright. There is a lot of noise.

The site of the memorial is a sign that they hope Diana can finally rest in peace. The Sunken Garden was supposedly Diana’s favourite place at Kensington Palace, where she took the boys and roller skated and did almost normal things, for a princess. A team of gardeners have been working since the fall of 2019 to add some 4,000 new plants: roses, dahlias, tulips, lavender, sweet peas and of course, forget-me-nots. The sculpture itself portrays Diana in a favourite outfit, with a big ’80s belt, likely taken from a Christmas card in 1993, notably her first holiday season as a single mother. That she is shown with a diverse trio of children shows how the boys want to remember the humanitarian legacy of their mother.

On What Would Have Been Her 60th Birthday, Princes William and Harry Come Together to Unveil a Statue to Diana, Princess of Wales

Queen Elizabeth Stoic and Alone as Her ‘Strength’ Prince Philip Is Laid to Rest; Prince William and Harry Talk