Sharon Stone Takes Cannes, Receiving the Commander of the Order of Arts and Letters Honour After Stunning on the Red Carpet 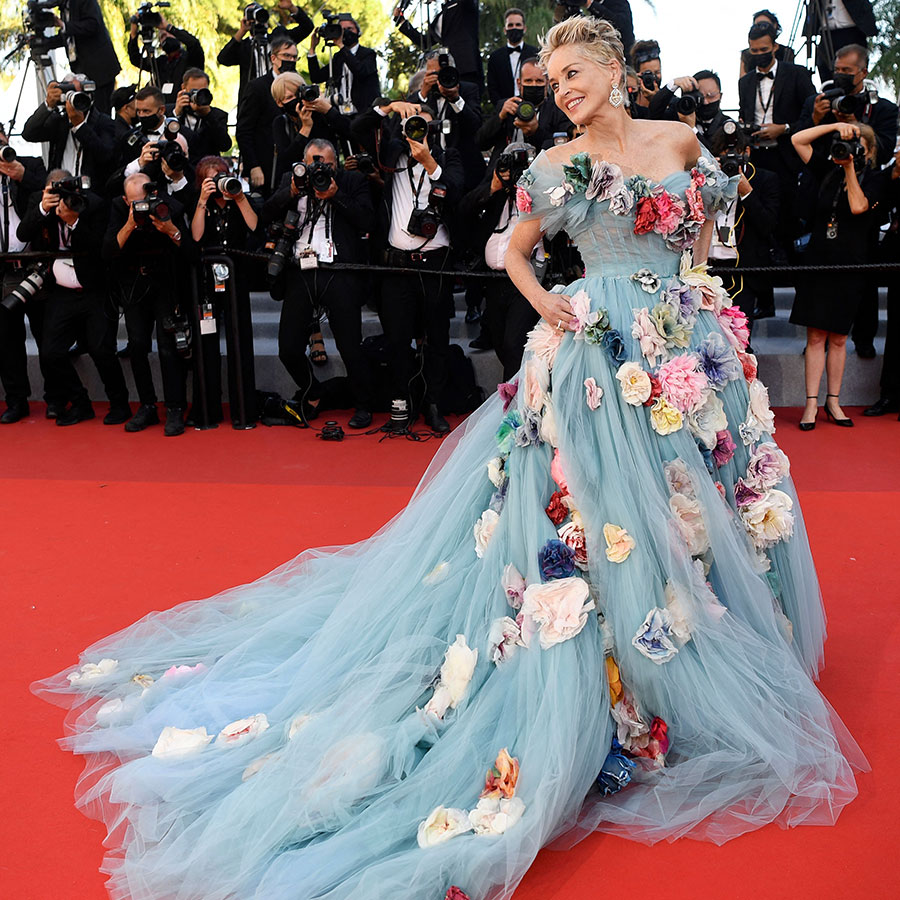 Sharon Stone, 63, arrived for the screening of 'The Story Of My Wife' in a blue Dolce & Gabbana gown and diamond chandelier earrings by Chopard at the 74th Cannes Film Festival on Wednesday. Photo: Christophe Simon / AFP / Getty Images

Less than a month after going viral for comments made in Zoomer’s April/May 2021 cover story about Hollywood reverence for Meryl Streep and the idea of pitting women against each other, actress Sharon Stone is proving the toast of the Cannes Film Festival.

Early Friday, the 63-year-old was named a Commander of the Order of Arts and Letters — an honour established in 1957 “to recognize eminent artists and writers, as well as people who have contributed significantly to furthering the arts in France and throughout the world.”

Stone, who was nominated for an Oscar in 1996 for her role in the film Casino, shed tears upon receiving the honour from Thierry Fremaux, director of the Cannes Film Festival. Afterward, she was met with congratulations from her 2005 Broken Flowers co-star Bill Murray.

Meanwhile, on Wednesday, Stone lit up the Cannes red carpet ahead of the festival screening of the film The Story of My Wife — about a sea captain in 1920s Paris who vows to marry the first woman he sees walk into a bar in which he’s dining — based on the 1942 novel by Hungarian writer Milán Füst.

The actress doesn’t appear in the film, but she turned heads with her dress — an icy blue Dolce & Gabbana Alta Moda gown embellished with lavish floral appliques from corset to train. She accessorized with a pair of diamond chandelier earrings by Chopard.

The Host With the Most

Stone, however, wasn’t finished at Cannes. On Friday evening, she hosted the annual amfAR Cannes benefit gala, which raises money for the international non-profit organization that funds AIDS research and education. According to the amfAR website, “to date, this star-studded event has raised more than US$235 million for amfAR’s life-saving research programs and has helped keep the fight against AIDS in the global media spotlight.”

The actress, a long-time HIV/AIDS activist, began working with the organization following the 1993 death of her acting coach, Roy London, from complications related to AIDS. The actress, however, has not appeared at the Cannes amfAR gala since 2014.

Stone tweeted an image of herself ahead of the gala, sitting on a bed in her feathered lilac gown and floral drop earrings alongside her eldest son, Roan Joseph Bronstein Stone and a woman identified as Bea.

Later, Stone was photographed arriving at the gala, which she attended with her son.

In addition to Stone as host, the event included a special performance by Alicia Keys, special guest Spike Lee and was chaired by notable names including Catherine O’Hara, Angela Bassett, Nicole Kidman, Regina King, Michelle Yeoh and Youn Yuh-Jung — the latter of whom, earlier this year, won her first Oscar at age 73, for Best Supporting Actress, while also becoming the first Korean actress ever to win an Oscar, for her work in the film Minari.