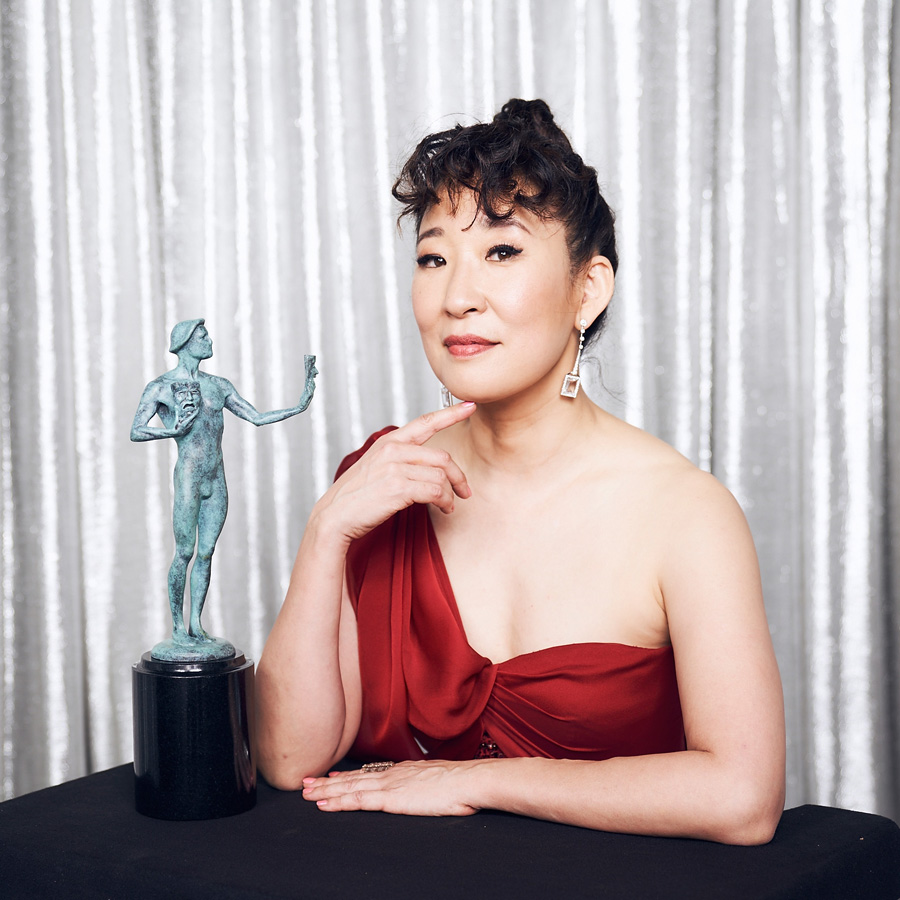 Sandra Oh, seen here with her SAG Award for Outstanding Performance by a Female Actor in a Drama Series for 'Killing Eve' in 2019, turns 50 on July 20. Legendary television producer Shonda Rhimes called the Canadian actress "a gift to every artist of colour who follows in her footsteps." Photo: Terence Patrick / Getty Images for Turner

And at 50, the Nepean, Ont.-born Oh — who bills herself as “Korean Canadian Los Angeleno” (she became a naturalized American citizen in 2018) — is just getting started.

It has been a slow, and very deliberate, decades-long career build for Oh, who is known in Hollywood for saying no to scripts and roles she felt weren’t interesting or substantial enough.

From early stardom on stage and screen in Canada, Oh went on to a steady lineup of supporting roles in American films — most notably with a memorable turn in 2004’s quirky wine country romance gone wrong, Sideways.

Oh then, of course, put in a celebrated 10-year run (2005 to 2014) on the Shonda Rhimes OG-TV medical soaper Grey’s Anatomy, playing Dr. Cristina Yang. In that decade, as the best friend and fellow surgeon of lead actress Meredith Grey (played by Ellen Pompeo), Yang was jilted, married, divorced, had an abortion and memorably was once forced to perform surgery while a gun was aimed at her.

But those dramas and traumas were nothing compared to her current adventures as MI5 officer Eve Polastri, the titular lead in the BBC thriller series Killing Eve (written originally by Fleabag creator and star Phoebe Waller-Bridge and then by Oscar-winning Promising Young Woman scribe Emerald Fennel). Polastri chases female serial killer Villanelle across Europe; the two engage in a mutual obsession and a trail of blood follows the action.

In 2019, which was the last normal, pre-pandemic award season, Oh performed her historic Golden Globes co-hosting gig alongside Andy Samberg.

“I said yes to the fear of being on this stage tonight to look out onto this audience and witness this moment of change,” she said at one point during the show. “And I’m not fooling myself. I’m not fooling myself — next year could be different, but right now this moment is real. Trust me, it’s real. Because I see you and I see you, all these faces of change. And now, so will everyone else.”

That night she also won her historic second Golden Globe. In the shadow of the controversy over the lack of representation of non-white actors as award nominees, her win was especially notable because it was also the first time an Asian actress had won the award since 1981, when Japanese Yoko Shimada won the Best Actress Golden Globe for the miniseries Shogun.

Oh’s parents — father Oh Junsu and mother Oh Young-Nam — were in the audience to witness their daughter make history. In her acceptance speech, after thanking her showrunner and cast, she broke into Korean (which she speaks fluently) to thank her parents, who had always wanted her to get a “straight” job, as a journalist or politician: “Eomma, appa! Saranghaeyo.” (“Mom, dad, I love you.”)

From Nepean to Hollywood

Oh first appeared onstage in her hometown of Nepean, where she grew up with her parents — a businessman and a biochemist, respectively — who were married in their native Seoul before moving to Canada. Oh started training in ballet at age four, but shifted to acting at age 10. She went on to study at the National Theatre School in Montreal and has said that her first love remains the live stage.

The actress, though, has always remained thoughtful about the difference between fame in Canada versus in the United States, as well as the more difficult road toward fame that she chose to travel down south — where roles for Asian actors were few and far between, and almost always supporting a white lead character.

In a 2007 interview with TV Fanatic, Oh explained, “First of all, in Canada, someone like me can be a star, a leading lady. In the U.S., [it is] much more difficult.” She admitted it is “debatable if there is even a star system in Canada, or an indigenous film industry,” noting it is also “very difficult to make a living as an actor.”

Living in the U.S. as a member of the Grey’s Anatomy cast at the time, she noted the presence of paparazzi on set, which would be unheard of in this country. “In Canada,” she explained in the aforementioned interview, “even if you are very successful, you can lead a very normal and healthy life.”

In her own way, Oh still managed that feat in the U.S. She and Sideways director-screenwriter Alexander Payne married in 2003 and divorced in 2006, but largely managed to avoid the tabloid spotlight. And in general, she is much more likely to catch media attention for speaking up about racism and the Asian American experience in the arts than about her personal life. Most profiles of Oh, as a result, focus on her unique acting methods.

Oh is intense on set and prepares with a fierce intellectual/spiritual approach. She is a member of a collective called Creative Dream Work that helps her prepare for roles with what has been described as “fus[ing] Jungian dream analysis with method acting.” Oh also stays grounded with Vipassana, a type of Buddhist meditation.

This intensity in preparation goes back a long way. In her very first major audition, for the 1994 CBC biopic The Diary of Evelyn Lau — about a teen runaway and sex worker who became a bestselling author and poet — Oh took a bus from Montreal, where she studied theatre, to the Toronto studio. She told the story to New York magazine of how she slept in the bus station and then went to a park to do breathing exercises. The broad casting call drew numerous hopefuls, but Oh went ahead and did her own thing:, which involved laying on the floor at the audition and asking the casting director to hold her hand. Then she said, “I’ll just squeeze it until I’m ready.”

Such was her confidence that she got up after 10 minutes, the quizzical casting director waiting patiently. She nailed the role and won a Best Actress Gemini for the effort. The same year she took the lead in Double Happiness (the first of three times she would work with Canadian director Mina Shum) — playing a Chinese Canadian actress torn between traditional family expectations and her artistic dreams. She won a the Best Actress Genie Award for the role.

The Chair and Beyond

Out of the gate as a star here at home, it would take 25 years for Oh to return to leading lady status on the global stage with Killing Eve.

The series is expected to premiere its fourth and final season next year but, in the meantime, Oh’s landed another lead role — this time in the Netflix dramedy The Chair.

The six-part series, which premieres August 20, comes from writer-executive producer-showrunner Amanda Peet, with Oh signing on as an executive producer alongside Peet’s husband, David Benioff and his producing partner D.B. Weiss — the duo that created Game of Thrones. (Oh is also an executive producer on Killing Eve.) In the series, Oh’s character, a Korean American professor, accomplishes her own historic first when she becomes the first woman of colour to head Pembroke University’s English department. As described by Netflix, Oh’s character “tries to meet the dizzying demands and high expectations of a failing English department.”

“Please come with me to Killing Eve and on to The Chair and on to the other projects,” Oh said during an appearance on the Los Angeles Times podcast Asian Enough. “Come see the characters that I’m playing that are much more deeply integrated in … the Asian American experience.”

In addition, Oh plays the overbearing mother to a 13-year-old daughter who turns into a giant red panda when stressed in the upcoming Disney Pixar animated movie Turning Red. The film, which is set in Toronto, is the first Pixar movie to feature an Asian family as the central characters and the first to be directed by a woman of colour — Domee Shi, a Chinese-born Canadian illustrator and director who won an Oscar in 2018 for her short film Bao.

As such, Turning Red, which hits theatres next spring, is a milestone for Asian representation in Hollywood and it’s only fitting that Oh plays a major role in it.

Leave it, however, to Shonda Rhimes, the legendary impresario of a television empire, to have the last word on Oh.

In 2019, Rhimes paid tribute to Oh after the actress was named alongside Michelle Obama, Dwayne Johnson, Nancy Pelosi and other notable honourees as part of Time 100: The Most Influential People of 2019. Time published six covers for the occasion, including one featuring Oh.

In her Time 100 tribute, Rhimes called Oh “legendary” and said that, on Grey’s Anatomy, she gave her the best lines and most emotional depth because of Oh’s skill. And, of course, because representation matters.

“Sandra Oh has chosen to fearlessly take up space in a universe that has not always made space for her,” Rhimes added. “Now, the power of her talented presence makes space for others. And that is a gift to every artist of colour who follows in her footsteps.”