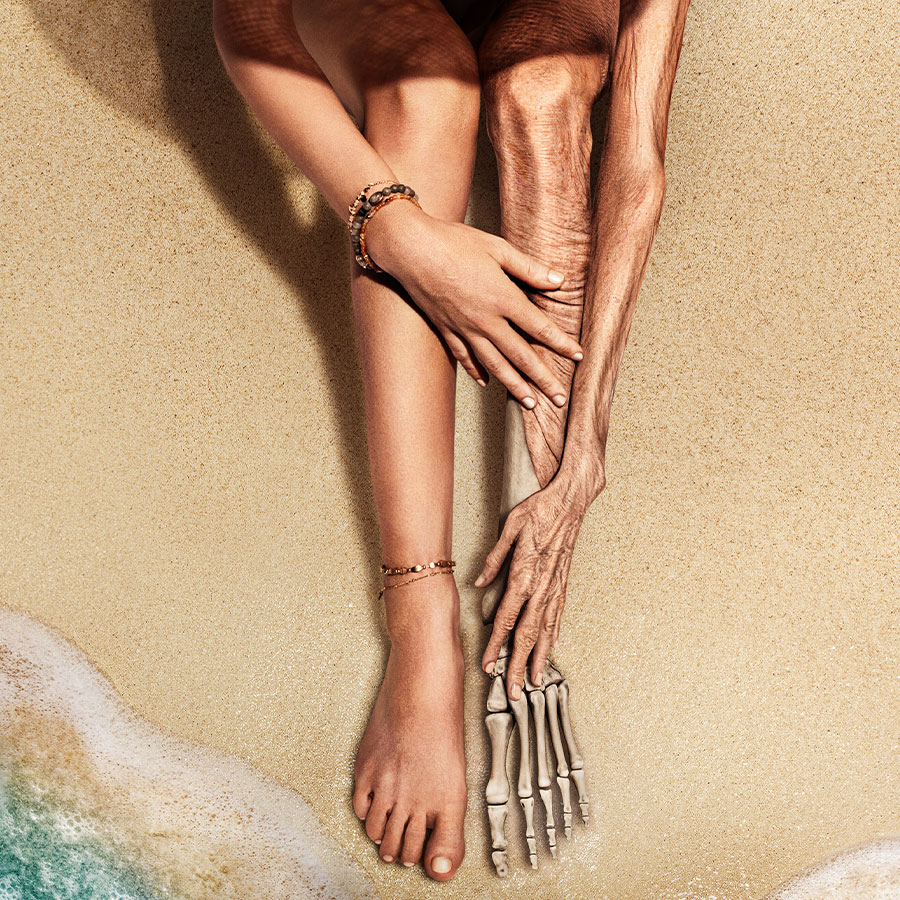 M. Night Shyamalan's latest horror film, 'Old,' takes place on a beach that causes people to age through their entire lives in a single day. Photo: Courtesy of Universal Pictures

Ah, the “horror” of aging. It’s the driving force behind everything from “anti-aging” serums that combat crow’s feet to classic comedy routines.

Then, of course, there’s Oscar Wilde’s 1891 classic The Picture of Dorian Gray, in which the eponymous main character sells his soul to remain forever young while his portrait ages in his place. Today, of course, a young Dorian could achieve the same picture/real-life effect with an Instagram filter and a little nip-tuck from a plastic surgeon. Sure it’s not as literary as Wilde’s version, but aging isn’t always poetic.

Take, for example, the latest M. Night Shyamalan big-screen horror film Old, which opens in theatres on July 23. The 50-year-old director, famous for his classic The Sixth Sense (“I see dead people”) and similarly creepy films like Unbreakable and Signs, uses aging itself as the vehicle for horror in Old — a movie about a group of people who visit a beach that causes them all to age through their entire lives in a single day.

Some characters arrive at the sunny, serene beach as kids and swiftly grow into adults, while the adults age into senior citizens. If you thought premature aging due to sun damage was bad, there’s no SPF to protect against what Shyamalan has in store. All the film needs is Sixth Sense star Haley Joel Osment, now 33, standing on the cliff overlooking the beach proclaiming, “I see old people.”

Come to think of it, this Old beach is actually the ideal vacation spot for Benjamin Button — just the thing he needs to reverse his chronic condition that causes him to age in reverse.

Nevertheless, it’s easy to look at Old as a film that demonizes, or unfairly caricatures, aging. And perhaps if the movie’s premise saw characters aging rapidly into insulting stereotypes like a cranky 90-year-old that waves his or her cane at kids, telling them to get off the beachfront lawn, that might be a fair point.

And Shyamalan is no stranger to using age as a horror device. In his 2015 film The Visit, a pair of siblings goes to stay with their sweet and loving elderly grandparents for a week. Except, since it’s a Shyamalan film, things aren’t as sweet and loving as they seem. In this case, the horror stems from the idea of flipping the archetypal grandparent figure — which we generally think of as kind and nurturing and gentle — on its head. After all, what’s scarier than granny gone bad?

In the case of Old, he uses the same trick with the beach setting — a locale associated with slow-moving, carefree relaxation that turns into a panicked, time-racing trap.

Still, while the title of the film points to the idea of aging, one of its stars, Vicky Krieps, spoke to The Hollywood Reporter about its themes of love and living in the moment that drive her character, Prisca.

“Love and family and all these things that are much stronger than any fears — the fear of aging and the fear of death,” she explained. “[Prisca’s] really saying, ‘Guys, stop running because we’re dying anyway.’ Instead of running from something that is already happening, just enjoy the moment.”

Which is, in a sense, a positive outlook for life in general. We’re all born, we all age and we all eventually die, so don’t get hung up on it. Enjoy life while you can. And if that’s the message you take away from the film, great.

Of course, if you woke up at age 50 this morning and then magically aged to be 105 by bedtime, no amount of “You’re only as old as you feel” platitudes would ease your panic.

Or how about famed aviator Wally Funk? Put her on that beach in her 30s, when she was applying to NASA to serve as an astronaut, and watch her age around 45 years. At 82, she’d be the woman she is today — a pioneering figure in aviation who, just this week, set the world record by becoming the oldest person to ever travel to space when she accompanied Jeff Bezos on his historic space flight aboard the New Shepard rocket.

As Harrison Ford — who turned 79 on July 13 and will play Indiana Jones in the upcoming fifth instalment of the action-adventure series — once told The Toronto Star, “I just don’t think of age and time in respect of years. I just have too much experience of people in their 70s who are vigorous and useful and people that are 35 that are in [lousy] physical shape and can’t think straight. I don’t think age has that much to do with it.”

Of course for some, aging can feel like a horror film — with related health obstacles affecting their quality of life — and those struggles should never be trivialized or downplayed.

But aging, for many of us, doesn’t have to be — and, in fact, isn’t — a horror show. Like the characters in Old, we can’t escape the aging process. But unlike the film, we have the time to make the most of it. And that doesn’t mean flexing on the ‘gram like Stallone or flying into space like Funk.

It means living and loving well, taking care of ourselves and staying grounded in the moment.

Sure, that sounds like a terribly dull ending for an M. Night Shyamalan film.

But in life, it makes for a pretty cool third act.

Old opens in theatres on July 23.