Nice Guys Finish First: Jason Sudeikis’ Ted Lasso is the Paragon of Optimism We Need During the Pandemic 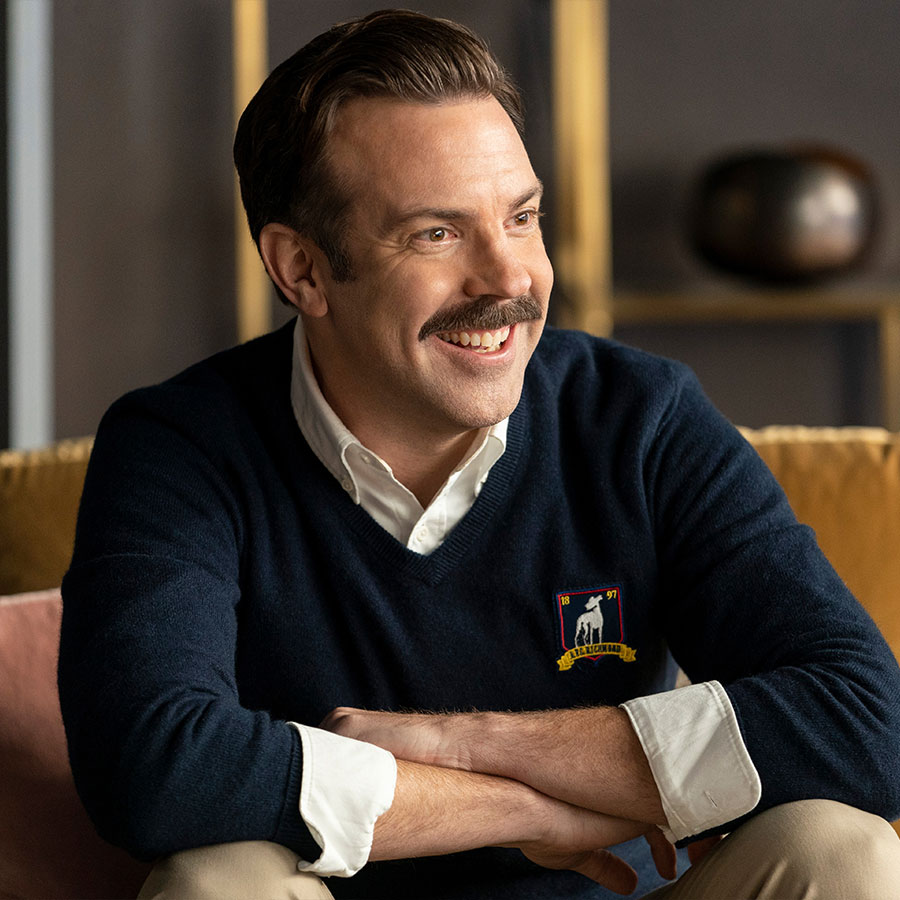 Jason Sudeikis, above, plays the eponymous Ted Lasso — an optimistic, refreshing break from brooding anti-heroes in the vein of Tony Soprano and Don Draper. The show's second season premiered this week. Photo: Courtesy of Apple TV+

Can you imagine Ned Flanders — Homer Simpson’s eternally optimistic neighbour on The Simpsons — as a leading man? That’s Ted Lasso — right down to the moustache and collared shirt — in a nutshell, as played by Emmy-winning lead actor Jason Sudeikis, 45. And it is far more plausible and endearing than it sounds.

If you didn’t get hooked on the feel-good surprise hit of the pandemic during its first season run, catch up fast because the premiere episode of season two is available today on AppleTV+ (with a new episode debuting each Friday).

The premise is a classic fish out of water story: amateur football coach Ted Lasso — a straight, white middle-aged guy from the Midwest (Kansas, where Sudeikis is actually from himself) — is hired by the owner of a beloved but flailing Premier League team in England, the fictional Richmond Greyhounds. This despite Lasso never having coached soccer (football, of course, to the rest of the world), indeed knowing not a whit about the beautiful game. A sleeper hit from last August, it recently garnered a whopping 20 Emmy nominations to accompany the critical swoons and impassioned viewers. (And, who could forget Sudeikis at the Golden Globes earlier this year, forgoing a tux for a hoodie from his sister’s clothing company as he accepted the Best Actor award for playing Lasso via satellite?)

Though I’ve always prided myself of being a card-carrying cynic (a particularly Generation X kind of hubris), I let myself get swept up in the warm hug of this show: tears welled up dozens of times over the ten-episode first season (I binged watched it, so my investment was heightened).

Even better and rarer, my heart actually ached with that bursting feeling, like it does in touching real life moments, when Lasso got through to the panoply of characters trying to resist his relentless optimism: both the knuckleheads and the nerds alike, the flinty scorned owner who can’t resist his homemade biscuits, the hot WAG (Wives And Girlfriends of athletes) with a heart of gold, or the evil business magnate. They all succumb to his normcore-clad, steady-as-she-goes belief in humanity.

The kernel of an idea for the series arose from a promo short Sudeikis wrote circa 2013, a skit in which he played an American football coach hired to coach the Tottenham Hotspurs. But at the time, the character was much more the ugly American blowhard. Sudeikis is best known for his stint as writer then featured player on SNL, as well as a slew of movies (Horrible Bosses, We’re the Millers) in which he played a universal type: not so nice, stereotypically handsome, annoying guys.

The unlikely set-up here hinges on Lasso’s own premier characteristic: his optimism is a thing of wonder. The writers (many of whom are actors in the series) take the feel-good vibe and imbue it with real texture and some well-crafted humour, somehow managing to keep it from veering off that fine line into saccharine. Showrunner Bill Lawrence described the work as “optimistic comedy” powered by heart, and empathy. It is, deep down, a rumination on the power of mentorship. Lasso himself says early in the season: “I do love a locker room. It smells like potential.”

Lasso is a refreshing tonic, after a long era of anti-heroes (from Tony Soprano to Don Draper) and the gritty darkness and crime-show torpor that had befallen our entertainment options. The character owes a debt to Johnny Rose, the soft-but-strong and wholly decent father figure Eugene Levy created in Schitt’s Creek. There is much talk of Mr. Rogers as an inspiration, but Sudeikis’s Lasso has a sexy side. The handsome actor underneath is almost — but not quite — obscured by that Flanders-style ‘stache. The twinkle in his eye is something he can’t control: Lasso is in on the jokes everyone makes about him, but it’s how little he cares about doubters that is resonant.

The depth comes from the reveal of the motivation that has driven the happy-go-lucky coach to take the long-shot job offer: Lasso wanted to give his failing marriage some space at the request of his wife, with whom the character shares a young son. Sudeikis plays the homesick, lovesick husband fearing he is losing his family 5,000 miles away with a depth of feeling that gives you the heart lurch I was talking about above.

The extraordinary thing about the series is that for Sudeikis, it was a case of art imitating life, but in reverse. Last November (though time frames are fogged in tabloid reports), the actor and his own wife, actress and director Olivia Wilde (Booksmart), got divorced and she subsequently began a relationship with Harry Styles, the male lead on her next film, Don’t Worry Darling. Now, the series had been long written, wrapped and aired before Wilde left him. But it all came out publicly around the same time: as before, Ted Lasso was a sleeper hit, growing by word of mouth. Come the tabloid photos of Wilde and Styles holding hands, we were seeing the breakup in art and life happening simultaneously, adding a frisson of reality to watching Sudeikis work through a divorce onscreen. That included speculation about whether the actor’s appearance at the Golden Globes in a hoodie and looking worn out was a sign of mental anguish. But, as he recently explained to GQ, “I was neither high nor heartbroken” but, rather, didn’t feel like wearing a tuxedo because it was the middle of the night in England, where he was beaming in from via Zoom.

Still, the fact that Wilde left him for a younger man (Styles, at 27, is 10 years younger than her) added buzz his real-life story. Further complicating things are the two young children Sudeikis and Wilde share. As Wilde and Styles became a symbolic new power couple in the entertainment industry (he is a remarkably self-assured young man, holding his own with a boffo singing and acting career alongside Wilde’s burgeoning indie directing chops), Sudeikis was quietly taking on the role of America’s new favourite dad. Less sexy a mantle, yes, but a challenge of substance nonetheless.

Much has also been made of how similar Lasso and Sudeikis actually are. He apparently really is a nice guy, despite years of playing yahoos. Look at the t-shirt wore to last week’s Ted Lasso Season 2 premiere, emblazoned with the names “Jadon & Marcus & Bokuyu” in support of Jadon Sancho, Marcus Rashford and Bakayo Saka — the England team players who suffered racist abuse after the country’s Euro Cup loss on July 11.

The cross-cultural British-American tension isn’t exploited too loudly in the show, though Lasso does emphatically hate tea. There are, however, fun nods to the bizarre-to-us lives of the wives and girlfriends of footballers, and how the tabloids distort the lives of famous-in-Britain stars (again, this mirrors the Wilde and Styles drama offscreen).

But it is the look at sport as community building block, and how the fans of Richmond are won over, eventually, by Lasso’s hokey goodwill offensive. He is baffled by the slang, but does clock the change in tone in the way fans call him a wanker. As the character of super-WAG Keeley Jones (Juno Temple), says: “You have no idea of the power of rhyming in the goddamn country!”

But it is Ted Lasso who has the best insight and advice for spats small and large, on the field and off, onscreen and off, and he would do well to follow in his real-life divorce and co-parenting situation: “A goldfish has a memory of ten seconds. Be the goldfish,” and move on.