Keegan-Michael Key, 50, on Embracing Simplicity and a Career Evolution in the New 1940s-Set Musical Comedy ‘Schmigadoon!’ 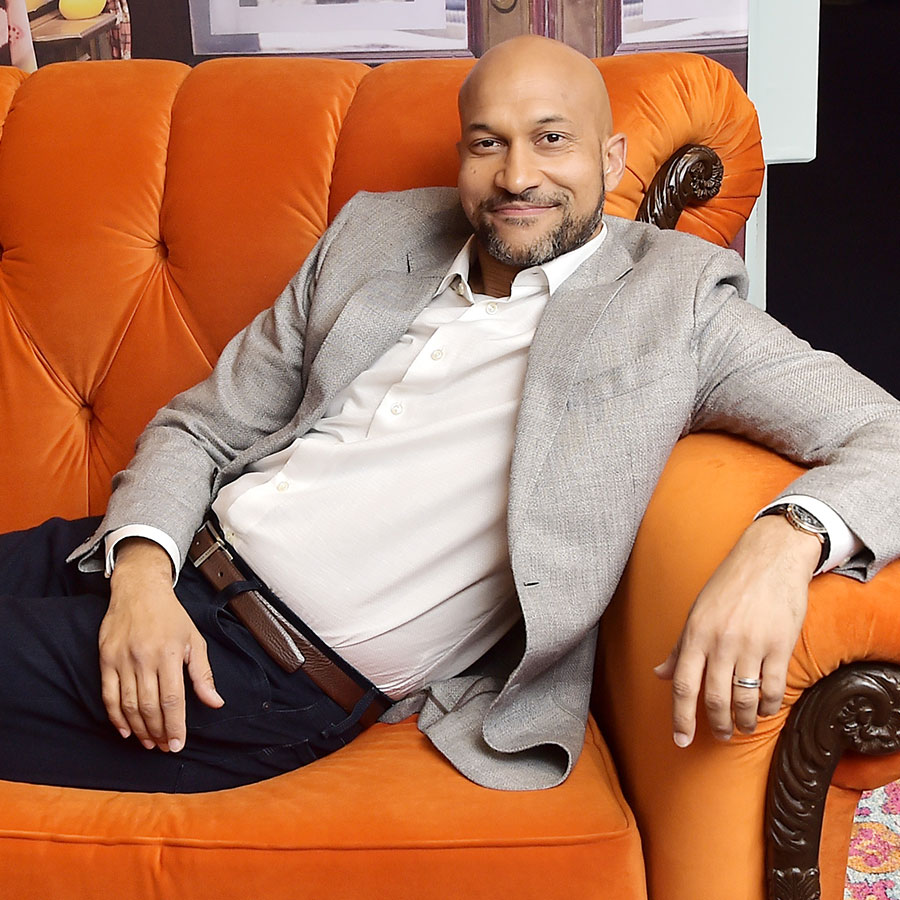 Keegan-Michael Key, seen here at the Toronto International Film Festival in 2019, turned 50 this year and is turning over a new creative leaf in the Apple TV+ musical series 'Schmigadoon!' — in which the comedian allows others to get the laughs. Photo: Stefanie Keenan / Getty Images for AT&T

Keegan-Michael Key is best known for his work with Jordan Peele on their Comedy Central sketch show Key & Peele, which enjoyed a five-year run that earned the duo two Emmy Awards, a Peabody Award, and the notable fandom of Barack Obama (Key famously played the “anger translator” for Peele’s calm and collected “Obama” on the show).

Aside from Key & Peele, the actor’s resume includes mostly comedic turns in big and small screen roles from Mad TV and Parks and Recreation to Keanu, Toy Story 4 and The Lion King — some of which helped hone his reputation as a physical comedian.

But Key turned 50 this past March and he’s been vocal about his desire to move to the next phase of his career, be it drama or a leading man entry, often expressing how it’s part of his growth both personally and professionally.

Of course, it’s not uncommon for comedic performers to shift creative gears in that way. In fact, Key’s long-time comedic partner, Jordan Peele, moved away from comedy to write and direct horror films that serve as a social and political commentary. Get Out (2017) and Us (2019) offered unflinching, layered messages about racism in America and resulted in massive critical and box office success — not to mention an Oscar for Best Original Screenplay for Get Out.

Key’s creative shift, meanwhile, is less overt. He stars in the new Apple TV+ series Schmigadoon! and, despite its musical comedy status, the role allows Key to play the serious, non-musical loving lead.

Co-created by Cinco Paul and Ken Daurio (Despicable Me, The Secret Life of Pets), and directed by Barry Sonnenfeld (The Addams Family, Men in Black), Schmigadoon! is both a parody of, and an homage to, the golden age of musicals.

Schmigadoon! (the title is a not-so-subtle nod to the classic musical Brigadoon) follows a couple named Melissa (SNL’s Cecily Strong) and Josh (Key), who go on a backpacking trip in the hope of salvaging their rocky three-year relationship. They stumble into a magical town called Schmigadoon, where the residents behave like they’re in a Rodgers and Hammerstein 1940s musical production. Yes, they break into song every chance they get and no, Key’s character Josh does not enjoy it.

This show seems like a logical next step for Key as he flexes his range as an actor. And while the series is an uplifting tale about evolution and growth, it also holds parallel to Key’s own creative evolution.

While a comedy like this seems familiar territory for Key, it’s not. In Schmigadoon!, Key plays a complex, layered character, while the comedy stems from the cast surrounding him — and it’s an undertaking for him to not play to his comedic strengths.

Instead he fully commits to anchoring the story by playing the role straight, taking on the perspective of viewers who are just as clueless as to what’s happening in the town. Key provides the voice of logic and reason — one that’s essential for the rest of the cast to shine — as he discovers truths about himself, and his relationship while trapped in this strange, magical town (the catch is that the couple can’t leave until they find true love).

In fact, Key has said that it was very much a challenge for him to not break into song with the rest of the ensemble cast. Having often, if not always, been the comedic relief in any given project, watching him make this shift is bold and entertaining.

Key’s approach to this challenge is, quite simply, to “embrace simplicity.” He explains over a virtual zoom call during a press day for the Apple TV+ series: “There is this sense that, as I get older, I should remember that, sometimes you have to just remember I am enough. Just keep telling yourself, ‘I am enough, I am enough.’ One of my heroes, Robert De Niro, always will say, ‘Do nothing, do nothing. If you’re trying, it looks like acting.’

“If you do nothing, you come through or the character can come through — especially for a project like this, where the writing is so exceptional that it’s more about riding the wave of the writing, than it is about you trying to give it something.”

As a smart parody of golden age musicals set in the ’40s, Key believes it adds to the dynamic of the show “because we’re dealing with a really fun fish-out-of-water story. And what we do is we get to see this lovely juxtaposition, this generational juxtaposition between the way musicals were treated, and the way people were portrayed in those musicals and this contemporary couple being tossed into this situation and how they’re seeing the world.”

What Schmigadoon! does extremely well — besides the splendid sets and costumes — is remind viewers how much musicals have evolved along with society. There were many problematic things about classic musicals that are pointed out, lightheartedly. The norms on gender roles, race and consent are among the many topics that are addressed, without being too political.

Key explains, “I love that fact that says Cecily’s character, who is a great maven of musicals, knows all the rules. But she also has to make comments every now and again about the fact that the women are written so one dimensionally, and the fact that somebody would turn away a pregnant girl as opposed to taking in her and helping her.”

He adds that, “the way that some of the things that are reflected, generationally, we’re still dealing with, and something seems so antiquated at the same time. And I think it’s one really wonderful dimension of the piece.”

Key himself boasts a deep love for musicals, with his resumé boasting a string of them, including two for Netflix in 2020 alone: the Ryan Murphy comedy The Prom, which co-starred Meryl Streep and Nicole Kidman, among others, and the holiday film Jingle Jangle, starring Forest Whitaker. As for his own personal favourite musical, he points to the Stephen Sondheim classic Sweeney Todd. “It’s interesting because it’s the opposite of Schmigadoon!. It’s very dark. But it’s my favourite musical because the music is so gorgeous.”

Key’s genuine affection and appreciation for the art of musicals is evident. And when it comes to those he admires, he points to certain themes that resonate most deeply.

It’s also ironic that the proliferation of 21st century streaming services has created a space for a unique and fun show like Schmigadoon! — themed around ’40s musicals — to exist. And at 50, it allows Key new creative territory in which to evolve as an artist — while the rest of us tap our toes along to the tunes.

The first two episodes of Schmigadoon! are now streaming on Apple TV+, with a new episode uploaded each Friday. Click here for more information.

3 Lessons From Musical Improvisation to Help Navigate Through Pandemic Lockdown