Netflix Reveals Image of Imelda Staunton, 65, as Queen Elizabeth II on ‘The Crown’ As the Actress Prepares to Play a More Modern Monarch 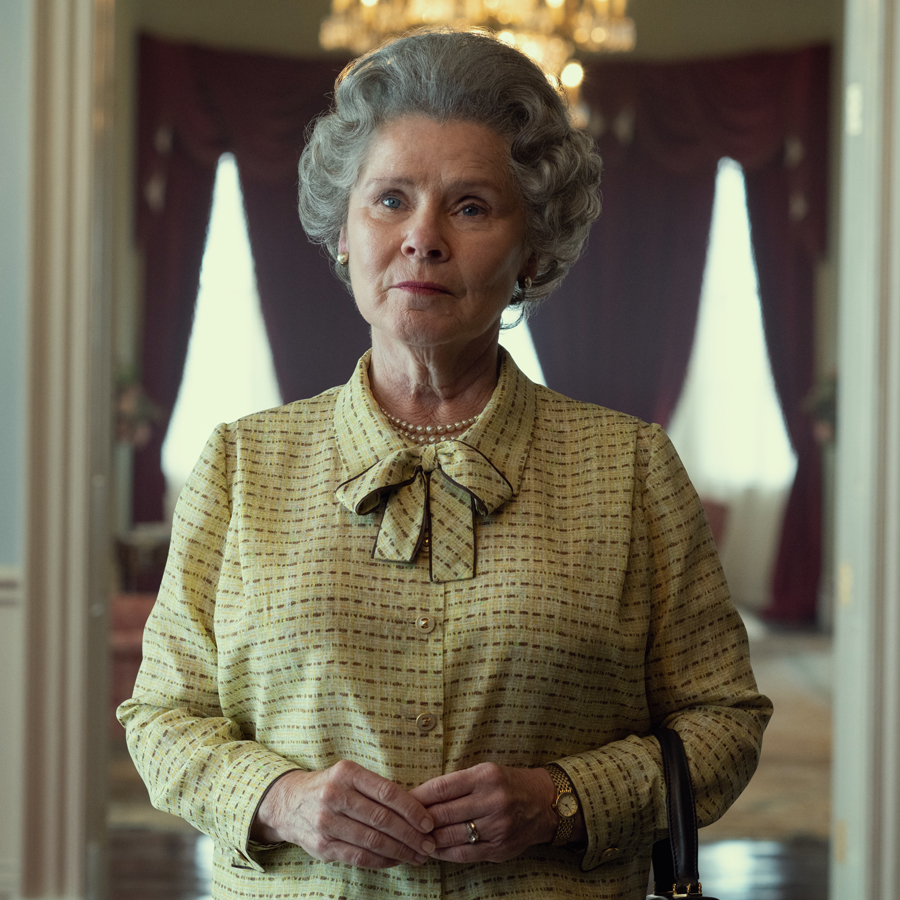 Imelda Staunton, seen here in the first image released of her as Queen Elizabeth II from the upcoming fifth season of 'The Crown,' will portray the monarch from the mid-1990s through to the early 2000s. Photo: Alex Bailey / Netflix

The Queen has arrived. Today, Netflix released the first image of British stage and screen legend Imelda Staunton, 65, as Queen Elizabeth II in the upcoming fifth season of The Crown.

Staunton, who is almost a double for the Queen as she appears in a yellow dress in the photo as Her Majesty, takes the royal reigns from Olivia Colman, who played the monarch in the third and fourth seasons of the hit series. Actress Claire Foy played the role in the first two seasons. Staunton will close out the series as the Queen for the fifth and sixth seasons, which are expected to span the mid-1990s through to the early 2000s.

Of course, Staunton faces something of an uphill challenge in playing the Queen. To start, the monarch she’s playing is the version of Her Majesty from The Crown that is closest to the real-life Queen. And the Queen from that time period was featured far more in print and television media than at any time previous, meaning images of her from that time period will remain fresher in viewers’ heads. Contrast that with Foy’s portrayal of the Queen at the beginning of her reign, which many modern viewers did not witness in real life while, for those who did, the memories aren’t as fresh.

Staunton herself said as much in an interview with the BBC, noting that, “I think my sort of extra challenge, as if I needed it, is that I’m now doing the Queen that we’re a little more familiar with. With Claire Foy, it was almost history and now I’m playing one that people could say ‘she doesn’t do that,’ ‘she’s not like that,’ and that’s my personal bête noire.”

As well, Staunton has two other “Queens” to live up to aside from the real one: those portrayed by Foy and Colman. Foy, for example, won a Golden Globe (2017), Primetime Emmy (2018) and two SAG Awards (2017 and 2018) for playing the part, and is even nominated for a 2021 Emmy for her very brief guest stint as the Queen in a flashback in the last season of the show. Colman, meanwhile, won a Golden Globe (2020) for the role and is currently nominated for a 2021 Primetime Emmy.

Colman herself reportedly discussed the difficulty of playing a real-life character like the Queen in a 2020 conversation at the Mountview Academy of Theatre Arts, saying that, “behind closed doors, we don’t know what she’s like. I had a little bit of play with that. But definitely… the hardest part I’ve done is someone who’s real. I’m not ashamed to say that I’m quite pleased now to be able to move on to something else.”

Still, Staunton is up for the challenge. In an interview with The Hollywood Reporter last year she noted that, “I have loved watching The Crown from the very start. As an actor it was a joy to see how both Claire Foy and Olivia Colman brought something special and unique to Peter Morgan’s scripts. I am genuinely honoured to be joining such an exceptional creative team and to be taking The Crown to its conclusion.”

Peter Morgan, the series’ creator, is quoted in the same piece as being “absolutely thrilled” that Staunton will be “taking The Crown into the 21st century.”

Joining Staunton in the final two seasons of The Crown are Jonathan Pryce, 74, as Prince Philip; Elizabeth Debicki, 30, as Princess Diana; Dominic West, 51, as Prince Charles; and Lesley Manville, 65, as Princess Margaret.

No further details have been announced about the upcoming fifth and sixth seasons though, judging by the time period it covers, many expect the show to include seminal moments such as Diana’s bombshell 1995 Panorama interview as well as her tragic death two years later.

Last July, Netflix announced that the series would add the sixth season rather than ending the series with the fifth because, as Morgan noted, “As we started to discuss the storylines for Series 5, it soon became clear that in order to do justice to the richness and complexity of the story we should go back to the original plan and do six seasons.”

Morgan also clarified that, “To be clear, Series 6 will not bring us any closer to present-day — it will simply enable us to cover the same period in greater detail.”

The Crown Continues Its Reign, Oprah’s Harry and Meghan Interview Gets a Nod and Other Takeaways From the 2021 Emmy Nominations

Olivia Colman on Acting Opposite Best Actor Oscar Winner Anthony Hopkins in The Father, The Crown and Finding Fame in Her Mid-40s

Diana Double Take: From Kristen Stewart to The Crown to 1980s TV Movies, Revisiting 40 Years of Actresses Playing the Princess of Wales