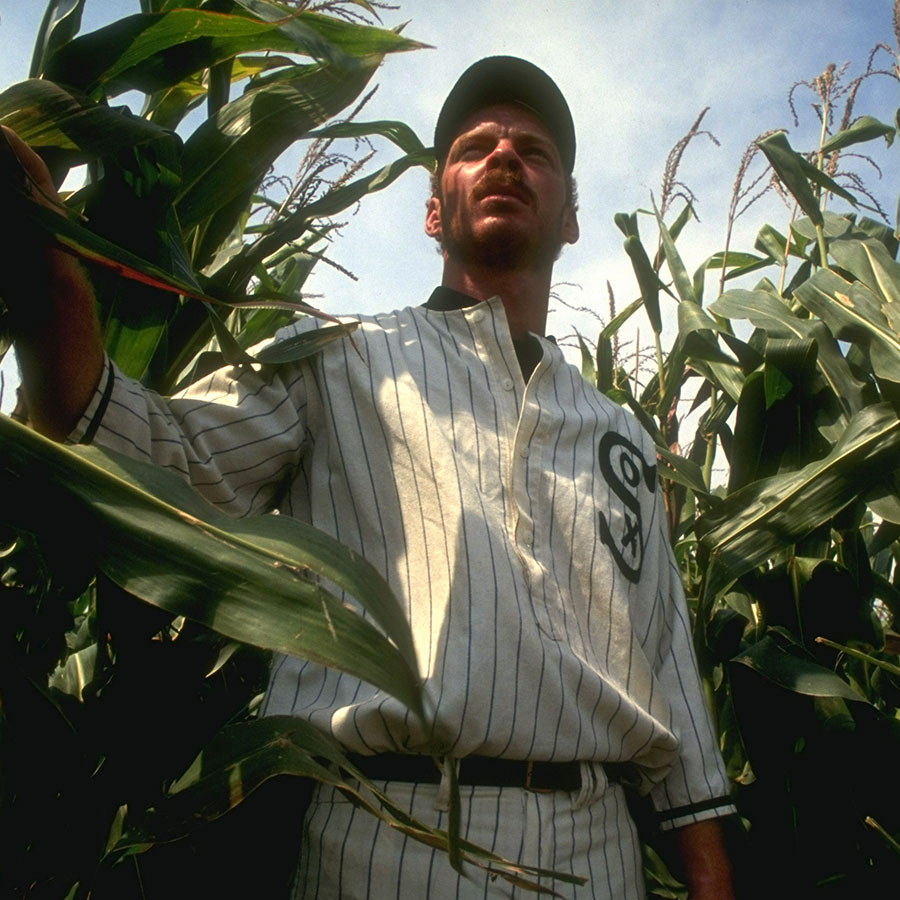 A "ghost player" in a vintage Chicago White Sox uniform emerges from the cornfield as he re-enacts a scene at the Iowa baseball field where the film 'Field of Dreams' was shot. On Thursday, the Chicago White Sox and New York Yankees will play a game on a diamond inspired by, and located near, the one used in the movie. Photo: Jonathan Daniel/Getty Images

The town of Dyersville, Iowa — where the classic 1989 baseball film Field of Dreams was shot — is hosting the state’s first-ever Major League Baseball game Thursday night.

The game takes place on a field built within a short distance of the actual baseball diamond seen in Field of Dreams — which still stands, cornfield and all, and regularly attracts tourists who like to knock out a few pop flies, or run the bases.

The game will attempt to recreate the sepia-tinted nostalgia for America’s pastime that made Field of Dreams such a hit. The movie itself — based on the novel Shoeless Joe by Canadian author W. P. Kinsella — stars Kevin Costner as an Iowa corn farmer and baseball fan named Ray Kinsella who hears a voice that tells him, “If you build it, he will come.” He then constructs a baseball diamond in his cornfield.

Eventually, the ghosts of Shoeless Joe Jackson and other members of the 1919 Chicago White Sox (many of the team’s players were banned from baseball for throwing the 1919 World Series in what became known as the Black Sox Scandal) appear on the field and begin to play ball, though only Kinsella can see them at first.

The film, which co-starred Ray Liotta as Jackson as well as James Earl Jones, initially received a weak theatrical release and some negative reviews before going on to earn three Oscar nominations (Best Picture, Best Adapted Screenplay and Best Original Score) and status as an all-time classic baseball movie.

For Thursday’s game, the field in Dyersville (which took two years to construct) borders a cornfield, through which players from the White Sox and Yankees will enter. The field itself seats 8,000 fans and the teams will sport retro jerseys — allowing the game to retain something of a nostalgic, American-as-apple-pie Field of Dreams vibe. Though, as the New York Times notes, “a few modern necessities detract from the romance just a bit,” adding “a Nike swoosh intrudes on the front of the teams’ retro-style uniforms, and the event is presented by an insurance company. There are batting cages and air-conditioned clubhouses — temporary but spacious — for the players.”

Still, a video released recently by MLB shows Costner, 66, walking onto the new Dyersville diamond — where tonight’s game will be played — and taking it all in.

“Wow,” he says repeatedly in the video, which you can watch below. “The field’s perfect. Every bit of it.”

As well, there is a real-life sentimental element to the game.

The diamond and land upon which Field of Dreams was filmed was sold to a woman named Denise Stillman in 2012 and, as Iowa’s WQAD8 television station reports, she “spent years pushing for an MLB game to come to Iowa.”

Stillman died from a rare tumour in 2018 but her husband, Tom Mietzel, told the station that, “She worked on it until she became too sick to work. In fact, the last thing she was doing, she couldn’t even speak in the last month or two, but … she was still emailing with Major League Baseball.”

He added that, “It’s heartwarming and a little bit heart wrenching for me personally. I wish she was the one standing here instead of me. We didn’t get as much time as I’d hoped, but at some point you’ve got to be thankful for what you get. You’ve got to be enjoying everyday.”

And as for the baseball players taking the field Thursday night, the excitement of playing on a real-life Field of Dreams inspires unbridled childlike enthusiasm. As White Sox closer Liam Hendriks told The New York Times: “I’m excited about running through the cornfields. Who wouldn’t be?”