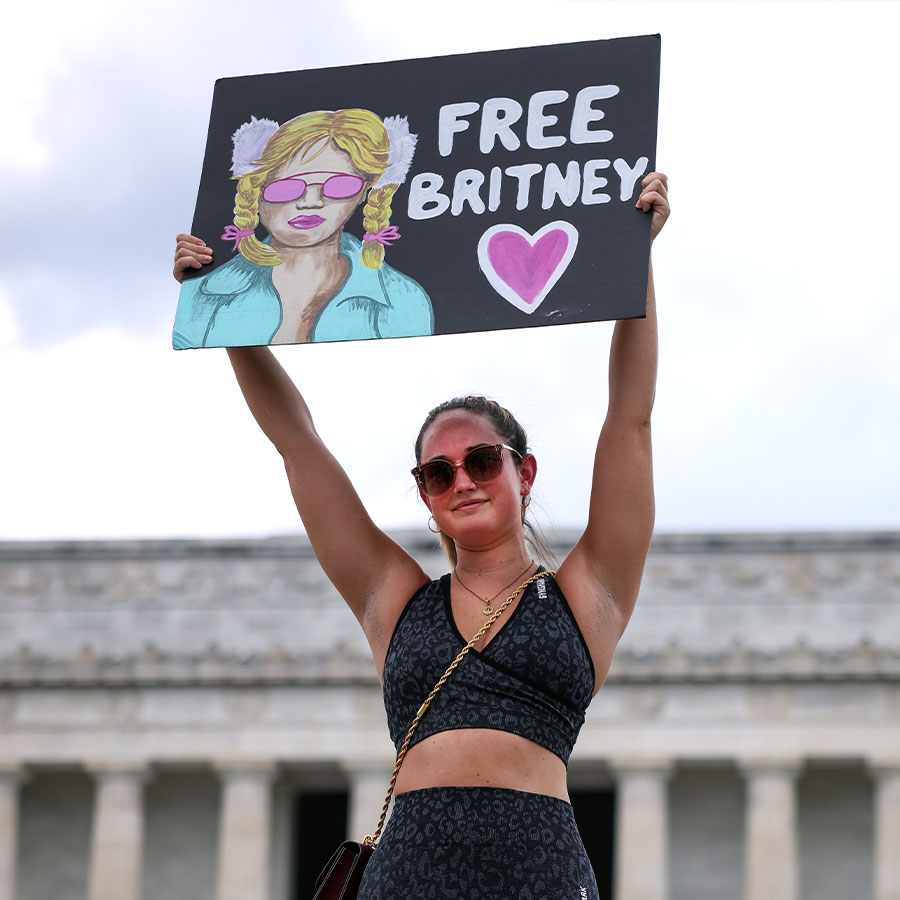 Battles with family over personal freedoms — such as Britney Spears's legal fight to free herself from her father's conservatorship (which spawned the #FreeBritney movement) — aren't a new issue for female artists. Photo: Kevin Dietsch / Getty Images

This story was written prior to Jamie Spears, father of Britney spears, stepping down from the singer’s conservatorship this week.

Recent news about Britney Spears’ legal challenge of her father’s control over her estate — a “conservatorship” arrangement which the singer has called “abusive” — brings to mind sculptor Camille Claudel, whose freedom was also limited by family members more than a century ago.

But such legal arrangements have been imposed on women artists before. They reflect biased assumptions about women’s abilities to manage their lives and their professional activities. Some following the #FreeBritney campaign are shocked that Spears’s family was able to maintain a conservatorship over the performer for 13 years under which the star says she was abused, exploited, medicated and controlled.

Claudel, who died in 1943, faced a similar arrangement to what Spears has described. At a time when it was very unusual for a young woman to work as a sculptor, Claudel launched a successful career. She studied first with sculptor Alfred Boucher before becoming the student, then assistant, collaborator and romantic partner of sculptor Auguste Rodin. In 1913, Claudel’s family admitted her to an asylum.

Expectations of a Conventional Life

Claudel’s relationship with Rodin was on and off from 1884 to 1896. These were no doubt very stimulating years for her, but they were also difficult. Her conservative, middle-class family wanted her to lead a conventional life — one that did not include sculpture as anything more than a hobby, and certainly did not include an extra-marital relationship with a much older man. Claudel’s family had expectations that she would marry, as most women of her social class did.

Rodin was committed to his life partner Rose Beuret and would not leave her for Claudel. A letter from Claudel’s brother suggests that Claudel became pregnant by Rodin and had at least one abortion during their time together.

When the stormy relationship ended, Claudel initially got back on her feet and began sculpting works that were quite different from Rodin’s. She used different materials than he had, her works were smaller in size and her subject matter was more contemporary.

But she found it difficult to get commissions for her work and to earn a living. Her neighbours began complaining about her unusual behaviours and she started to become paranoid that “Rodin’s gang” (“la bande de Rodin”) were stealing her ideas and preventing her from selling her work.

The doctor-in-chief diagnosed Claudel with paranoid psychosis. This confirmed the observations of a doctor who was a neighbour of the sculptor, who had prepared the necessary medical certificate at the request of her family. On March 7, 1913, Claudel’s family began the paperwork to admit the sculptor to the Ville-Evrard Asylum, where she was taken on March 10.

Her family had been concerned about Claudel’s mental health for some time, but they waited until eight days after the death of her father to institutionalize her. Her father had supported her, morally and financially, despite strong disapproval of her career and her life choices from her mother. Under the 1838 “loi sur les alienés” (law dealing with the “alienated” or the “insane”), once she was diagnosed as “insane,” she acquired the legal status of a minor and her family had the authority to commit her and make decisions on her behalf.

As French literature scholar Anna Norris shows, initially, Claudel’s cousin Charles Thierry wrote to her family and to the press to campaign for her release, but her family would not hear of it.

Claudel’s family obtained an order that the institution prevent her from sending and receiving letters. Not knowing that her letters were not getting out, except to her family members to whom the institution sent them, she continued to write.

Norris and psychiatrist Michel Deveaux both write that doctors thought Claudel could be released in the 1920s, but that her family kept her there despite Claudel’s pleas to leave. This exertion of control was not because they were profiting from her work (as Spears has accused her family), but rather, as Norris argues, because they disapproved of her life and were embarrassed by her choices.

I have wondered if the sculptor’s family may have felt that she would hinder the career of her younger brother, Paul Claudel, just as he was becoming well-known as a writer.

Freedom and Autonomy Threatened Others

Since the 1980s, Claudel’s life and works have been rediscovered by scholars working in the fields of art history, women’s studies, French cultural studies and the history of psychiatry.

Artists, particularly in France, have produced a trove of popular works about her. Books, plays and films have focused on her relationship with Rodin and, more recently, on her institutionalization.

As with Britney Spears, all the facts surrounding Claudel are not always easy to interpret. What’s clear is that both talented women lost control of their lives, were isolated and declared mentally unfit by medical professionals after family intervention. In both cases, larger medical or legal systems did not help these artists regain control of their situations or get better.