Robert Redford Turns 85: From Oscars to Environmentalism, How the Hollywood Legend Defined His Legacy On Screen and Off 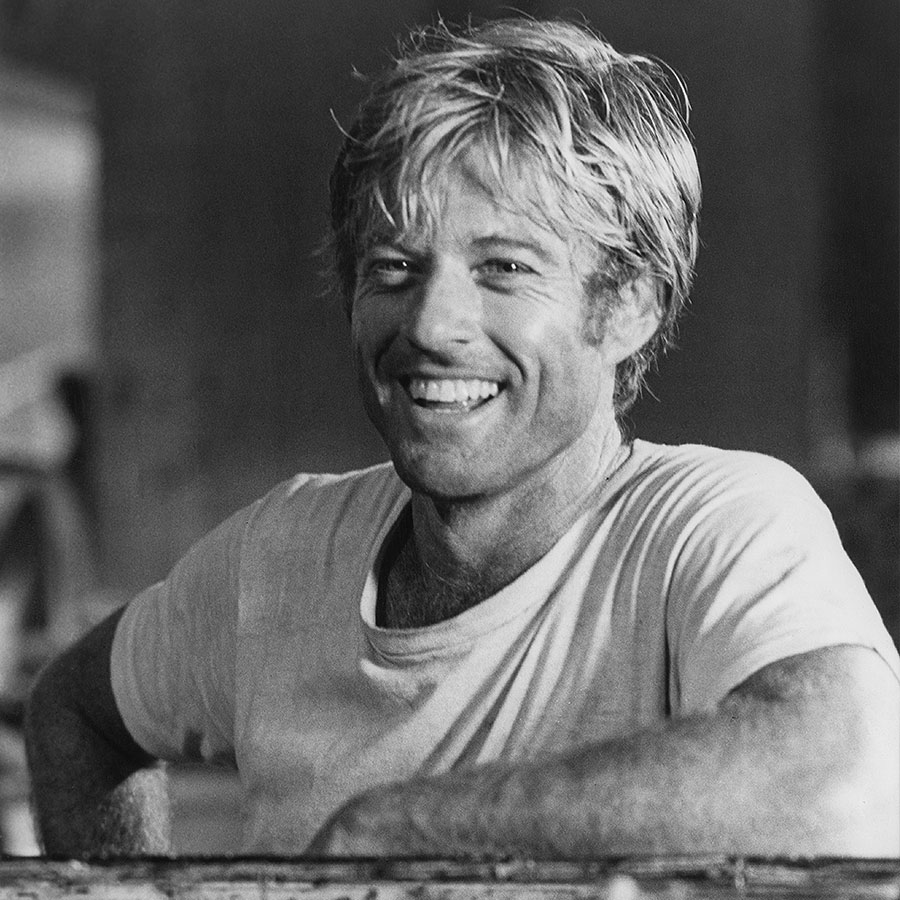 Robert Redford, seen here in 1975, turns 85 on Aug. 19 and, though he's technically retired from acting and directing, the Hollywood legend's legacy continues to grow on and off screen. Photo: Hulton Archive / Getty Images

Hollywood legend Robert Redford celebrates his 85th birthday on Aug. 18 and, as authorized biographer Michael Feeney Callan put it out a decade ago in his Robert Redford: The Biography: “Contractions and paradoxes [define] him.” Being Hollywood’s golden boy while also deliberately trying to work outside of the system, Redford has built a legacy as an actor, director, and environmentalist over the past six decades.

His resume, in front and behind the camera, speaks for itself: Butch Cassidy and the Sundance Kid, The Way We Were, The Natural, Out of Africa, A River Runs Through It, The Sting, All the President’s Men, Ordinary People, The Horse Whisperer and so many more.

But these days, aside from the occasional quirky cameo — such as reprising his role as Secretary Alexander Pierce in the 2019 blockbuster Avengers: Endgame — the Oscar-winner has retired from acting and directing. He does, however, remain committed to his longtime environmental activism and, as he recently told Rolling Stone, “using storytelling to help reimagine environmentalism and expand the idea of what it means to be an environmentalist.”

To celebrate Redford’s 85th, we look at six ways the Hollywood legend defined — and continues to grow — his legacy, on screen and off.

Redford was already making a name for himself on stage and screen — he won a Golden Globe in 1965 for “New Star of the Year — Actor” for his work in the big screen drama Inside Daisy Clover — when he was immortalized in the New Hollywood western Butch Cassidy and the Sundance Kid, which he made with close friend Paul Newman.

“I had to learn that humility was going to be a major component that I wanted to keep in my life,” he said in a conversation with his grandson Dylan when discussing the all-encompassing celebrity that ensued.

By the early 1970s he was the country’s top box office draw and Redford began working both sides of the camera — a strategy later picked up by actor-producers like George Clooney, who star in studio pictures while making and championing edgier indie movies. For every schlock (e.g. Indecent Proposal) there’s a counterpart exploring his interest in outsiders or outlaws (like Sneakers) and men in pursuit of justice.

Redford nabbed an Academy Award for Best Director for his 1980 directorial debut Ordinary People, which arguably redefined the family drama. But from Butch Cassidy and the Sundance Kid to Quiz Show, what stands out about Redford’s films is that he has a penchant for exploring themes about standing against corruption and hypocrisy that still resonate today.

That includes the 1972 film The Candidate (a prescient and under-appreciated satirical look inside American political campaigning), while the 1973 romantic drama The Way We Were explores the politics of being an outsider and the tension between an idealistic Jewish communist (Barbra Streisand) falling in love with an all-American writer to whom everything comes too easily thanks to his lack of conviction and good looks (Streisand reportedly had a crush on him while filming). As well, the 1975 thriller Three Days of the Condor (about a CIA analyst on the run from rogue group of spies and ‘steeped in the tense national mood of post-Watergate paranoia’) experienced a revival of interest during the Trump presidency.

Speaking of the Trump presidency, the ex-president’s constant battles with the press — as well as numerous allegations of corruption and the regular comparisons drawn between Trump and Richard Nixon — brought new relevance to another Redford classic: All the President’s Men. The film stands as one of the great journalism movies of all time, but Redford did more than co-star — he helped bring it to the screen as a producer. Through his production company Redford bought the rights to the book by Washington Post reporters Bob Woodward and Carl Bernstein about their investigation into the bungled break-in at the Democratic National Committee’s offices — the era-defining Watergate scandal.

Sure, Warren Beatty made the 1975 classic Shampoo, but it’s Redford’s tousled coif that ruled the seventies (like a walking ad for The Dry Look hairspray). All teeth, blonde hair, and blue eyes, he was blessed with a lanky wiry frame and collegiate good looks (also a curse — director Mike Nichols famously rejected him for the lead in The Graduate because he believed Redford had never struck out with a woman).

Redford’s look is laid-back and he sticks to it: slim corduroys, tweed jackets, and a seemingly bottomless closet of chambray shirts and aviator sunglasses. And what he has worn on-screen often reflected his off-screen persona and personal style. In Three Days of the Condor, for example, he made a humble pea coat iconic (just ask Vogue), and elevated the Aran knit turtleneck in The Way We Were. Casual doesn’t always work but it’s his look: to promote 1969’s Downhill Racer in Toronto with Natalie Wood, for example, he paired a tuxedo with a white turtleneck.

In fact, whether he’s Dortmunder, the charismatic ringleader of the band of hapless crooks in The Hot Rock, or the suave bootlegger Jay Gatsby seducing Mia Farrow’s careless socialite in three-piece suits by Ralph Lauren, Redford’s now as much of an enduring menswear style icon as Sidney Poitier, Steve McQueen and Cary Grant.

Redford is an accomplished athlete and outdoorsman who earned a baseball scholarship to the University of Colorado, excelling at sports off-screen and in several movies — including The Natural, the beloved baseball film about a gifted middle-aged player and the mythology of American’s pastime. In addition, his turn as a solo mariner attempting to survive while lost at sea in the 2013 film All is Lost was a late-career triumph.

“I ride horses, ski, play pretty hard tennis,” Redford has said of keeping active as he gets older. “I still have energy. When that starts to shut down, I might start to think about age.” He’s been married to European artist Sibylle Szaggars since 1999 and, in the same interview, credited the fact that she’s European, and about 20 years younger than him, with helping him develop a renewed zeal.

As part of his eco-activism, in the 1960s Redford bought some land in the Mountains of Utah and named it after his iconic character the Sundance Kid. He also established the Sundance Film Festival as a means to stand outside the commercial Hollywood system in which he became a star and foster independent storytelling and diverse emerging talent.

He has since turned Sundance into a brand — growing from a scrappy annual festival in Park City, Utah, to become the largest independent film festival in the U.S. It also encompasses an esteemed filmmaking institute (the nonprofit held its first artist lab in the summer of 1981), a TV channel and even a mail-order catalogue. His own taste and priorities of conservation and diverse voices are reflected in what he has produced — from films centred on conservation and the environment (documentaries like Watershed, about water ethics in the American West) to features like The Motorcycle Diaries.

Redford has taken part in grassroots conservancy since his early 20s and has been involved in may pieces of environmental legislation over the years—including the Clean Air Act in the mid-1970s. He has produced many environmental documentaries, including an Oscar-nominated short about solar energy in 1979 called The Solar Film. And, as part of his lifelong environmental advocacy, he served on the board of the Natural Resources Defense Council for decades, hence the many awards he’s garnered for his environmental work.

As he did with The Milagro Beanfield War (about land disputes in New Mexico with big business), Redford has made issue-based dramas in which there’s an undercurrent of the quest for the truth. The upcoming Dark Winds series in development at AMC will be a fitting coda to a career dedicated to progressive social causes.

The prestige adaptation of Tony Hillerman’s 1970s-set detective books about Navajo police detectives doesn’t shy away from issues like the legacy of residential schools. Redford has had the rights since 1988 and wanted to see it made with an all-Native American cast and writers’ room. That decades-long journey came to fruition just last month and is currently in production under Smoke Signals’ Chris Eyre direction, with permission to film on Navajo lands in New Mexico.

Natalie Wood: Decades On, Why the Fascination With Her Untimely Death Remains