Catharsis in Paradise: From ‘The White Lotus’ to ‘Nine Perfect Strangers,’ the Best Pandemic-Era Getaways Are on TV 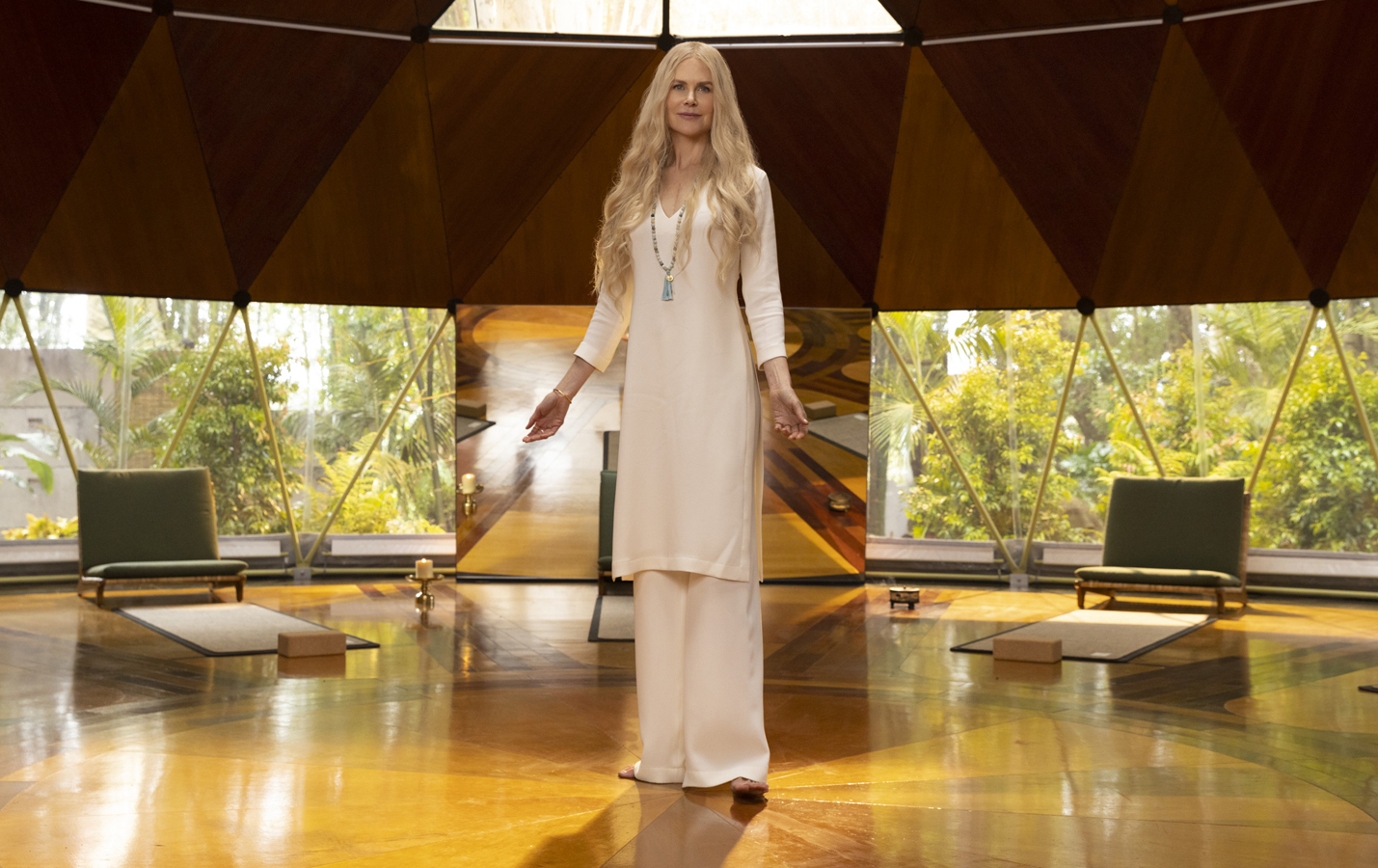 Nicole Kidman, 54, stars as the proprietor of a wellness escape in 'Nine Perfect Strangers' — one of the recent shows that has provided much-needed travel escapism during the pandemic. Photo: Vince Valitutti / Hulu

“This is why people go on vacation,” Mark (Steve Zahn) sighs, contentedly, in bed the morning after reconciliation with his wife (played by Connie Britton) in the recent HBO series The White Lotus. It’s the end of his Maui beach holiday and, at least temporarily, order is restored.

The six episode drama (devised under pandemic lockdown and filmed at a single location at the Four Season Resort Maui at Wailea) became the surprise hit of the season and has been renewed for a second installment that will take place at a different location of the titular hotel chain and feature a new cast. What sustained viewership (at least in my case) was the mounting existential dread of the show’s upstairs/downstairs dissection of racial and class tension (something that Downton Abbey never had) and the vague promise of a murder — preferably one of the awful guests getting their just desserts.

It also hit on a sub-genre perfect for the moment — the vacation whodunnit — which provides an antidote to small-town murder-mysteries like Mare of Easttown (where everyone knows everyone) with the benefit of breathtaking scenery.

Next up in the sub-genre: Nine Perfect Strangers, a melodrama that looks a lot like Gwyneth Paltrow’s Netflix series The Goop Lab — and not just because it stars Nicole Kidman, 54, in witchy blonde Rapunzel mode. Her character Masha is the guru of Tranquillum House — a high-end wellness spa — who hand-selects the guests for her 10-day total mind and body transformation retreat. Like Big Little Lies, it’s based on a contemporary thriller by Liane Moriarty and, like that show and another HBO offering, The Undoing, was created (in this case, co-created) by David E. Kelley. Nine Perfect Strangers also moved its planned production from Los Angeles to set up a one-stop shooting locale — à la The White Lotus — at Soma, a Vedic meditation resort in Australia’s posh Byron Bay.

As with The White Lotus, episodes observe a day by day format and, beside having a tropical resort (and the occasional lens flare) in common, both also concern a group of privileged and predominantly white people on a temporary escape from their daily routine. Here, however, their navel-gazing isn’t incidental: the promise of healing is their goal.

The motley cast includes Melissa McCarthy, Michael Shannon, Samara Weaving, and Bobby Cannavale, all with various goals to process grief, work on their self-esteem, rekindle romantic sparks, or learn forgiveness in between meals taken on gold cutlery and sips of the smoothies tailored to their metabolic needs. Regina Hall’s dowdy divorced housewife Carmel, for example, is counting on Tranquillum’s promise of a life-changing reboot.

It’s all handsomely shot by Canadian cinematographer Yves Bélanger (of Wild, Sharp Objects, and Big Little Lies) but, for all its amenities and messy drama, Nine Perfect Strangers is oddly anodyne. For example, the discreetly efficient staff are but tools for the guests’ own self-improvement and comfort, though the show is never in danger of becoming a satire of wellness culture (or a critique of anything else, for that matter).

Arriving on the heels of a hit show like The White Lotus and with a similar premise and a strong cast, Nine Perfect Strangers will still suffer by comparison. It isn’t as dark as it thinks it is (at least in the six of eight episodes made available to press).

People relax and regroup in predictable catharsis, in paradisiacal surroundings, but with none of The White Lotus’s cunning; in spite of the psychedelics and sinister foreboding, taking the cure Tranquillum is as reassuring as a hug.

It’s even somewhat hokey at times. Staff may dress in tasteful shades of dun rather than the garish Technicolor of, say, Barb & Starr go to Vista Del Mar (the pandemic first-wave’s feel-good viewing) but the result is the same. As cynical guest Lars (Luke Evans) posits, it’s “just another construct to separate rich people from their money [and] get them to feel good about themselves in the process.”

It’s the height of pseudo-intellectual viewing, which is actually fine. Because sometimes all you need is Michael Shannon in plaid boxer shorts singing his heart out on Sandy and Danny’s duet from Grease, “You’re the One That I Want.”

And thinking about this new appetite for vicarious exotic getaways populated by good actors as people behaving badly reminded me of a genre I grew up on: the guest-star anthology format. Every week a new batch of boldface actors arrived with their problems, had a few misadventures, and then left before we could get bored with them.

Think about it: The White Lotus’s put-upon resort manager Armond (Murray Bartlett) is basically an unhinged Captain Stubbing by way of Basil Fawlty, surrounded as he was by a mix of emerging talents and stars that you recognize from something else. Maybe what we’re really craving is The Love Boat. Or for something a bit more malevolent, Fantasy Island.

As it happens, Aaron Spelling and Leonard Goldberg’s iconic 1970s series has been rebooted (not to be confused with a recent horror movie version) and began airing on GlobalTV last week. It’s the perfect middle ground that leans into the Faustian pact that Mr. Roarke’s mysteriously jovial persona suggested.

In the new version, his descendant, Elena Roarke (Roselyn Sánchez), wears a white three-piece suit in the style of Ricardo Montalbán’s enigmatic Mr. Roarke (a rare early instance of a Latino star carrying a network show). The 10-episode first season of the supernatural drama was filmed in Puerto Rico, standing is as the resort island, imbued with spooky magical realism, and it looks great. And unlike Nine Perfect Strangers — where guru Masha alters the guests’ sense of reality without their consent — wish fulfillment by whatever means available is what these vacationers come for.

As do we. Pandemic prestige television has finally caught up with our desire for escapism.

The Crown: Netflix Reveals First Images of Charles and Diana for the Show’s Upcoming Fifth Season

Keegan-Michael Key, 50, on Embracing Simplicity and a Career Evolution in the New 1940s-Set Musical Comedy Schmigadoon!