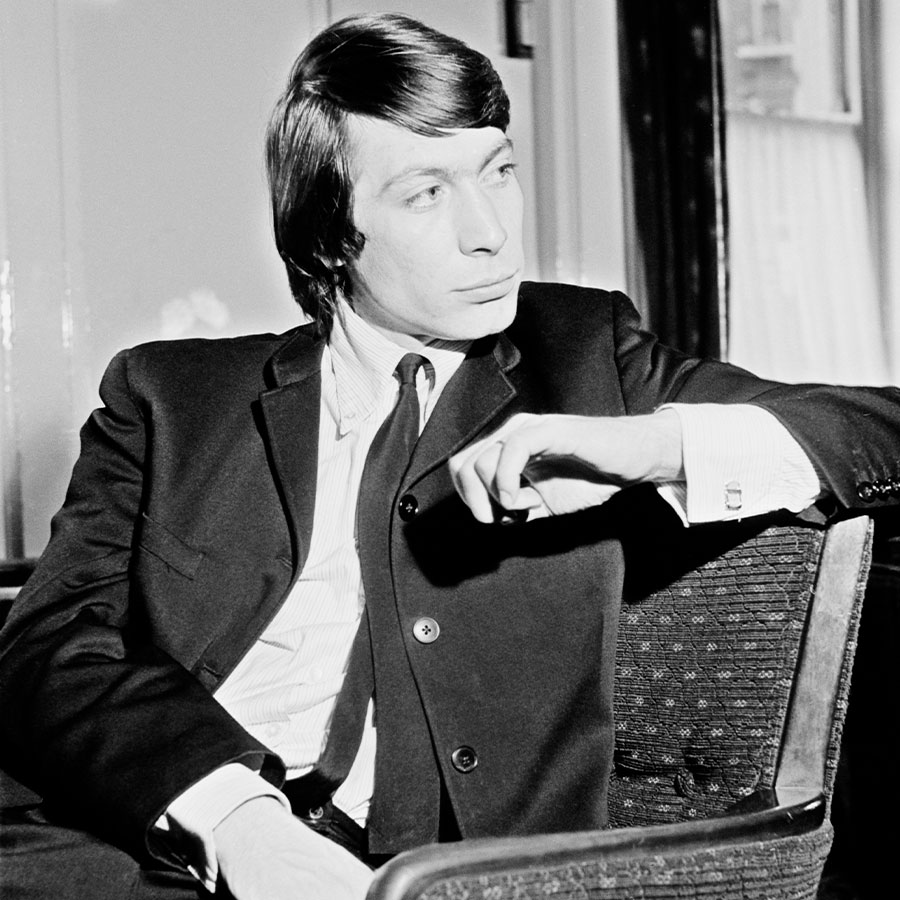 We’ve seen thousands of photos of Charlie Watts over the past 57 years of his time as the drummer for the Rolling Stones. Just moments after his publicist announced his death yesterday, images of Watts flooded online, posted by his rock-legend peers and everyday fans alike. The way we mourn pop cultural icons now, with the instant connection and canonization of social media, means we are all consuming those images together, in real time.

There are a couple of things you notice immediately in this rich trove of photos of Watts over the years. First is that he was an elegant dresser. He never went for the gender-bending playfulness or extravagant fashion antics of show ponies Keith and Mick; content in the background, Watts was always a sharp dresser, given to impeccable Savile Row suiting. The second thing you notice, and this more subtle but much more telling, is how ramrod straight he sat when behind his drum kit. Charlie Watts never slouched, and that tells you a lot about the man, his discipline and why the internet concluded yesterday that he was the “heartbeat” of the Stones, both rhythmically and figuratively.

Watts died at 80, peacefully, surrounded by his family. It was only a few weeks ago that the band announced he would not be joining them on tour this fall, as he was recovering from a surgery. He had survived a 2004 battle with throat cancer, not to mention almost six decades as part of one of the hardest-living bands in history. Until yesterday, the Rolling Stones felt immortal (notwithstanding Brian Jones, who drowned in the full flush of youth in 1969). Even when we made the endless stale jokes about them being dinosaurs on tour, we were not-so-secretly rooting for them to continue living large, and long. The Stones pulled off massive stadium gigs with a swagger and vigour that kept us all feeling a little bit immortal alongside them. The more robust they were, the more robust we all remained. When the unthinkable happened and lithe, fit Jagger had a heart procedure a couple years ago, we all breathed a sigh of relief when he appeared (again, on Instagram) dancing within a few days to show he was himself again. So even though there was warning he was unwell, losing Charlie Watts hit hard.

When a public figure dies, we also get an algorithmic curation of words, both in tributes and in quotes, attributed to or about the subject. Watts’ own quotes take on heavier weight, as he so seldom gave interviews (especially as compared to his flashier bandmates — Glimmer Twins, Mick and Keith). He put the music first. Here is a rare gem, this one from 1991 in an interview with the San Diego Tribune: “I don’t know what showbiz is and I’ve never watched MTV. There are people who just play instruments, and I’m pleased to know that I’m one of them.” And as to the lifestyle, Watts famously said “It’s supposed to be sex and drugs and rock ‘n’ roll … I’m not really like that.”

Indeed, Watts was married to the same woman, Shirley Ann Sheperd, since 1964, a rock ‘n’ roll miracle. They had a daughter and a granddaughter. Watts did have a midlife crisis period of substance-induced chaos in the ’80s, when he sank into a two-year battle with booze and heroin; he credited his wife for helping him triumph over that. They lived a quiet life in the country, in Dorset, breeding Arabian horses. Not without quirks, Watts collected vintage cars, though he never drove.

Watts’ first love was jazz. He grew up playing his drum kit along with classic jazz albums, and he devoted his later life — around the gigantic Stones’ tours — to his jazz bands, including the big band jazz collective Charlie Watts Orchestra in the ’80s and Rocket 88, a boogie-woogie band.

His drumming style was as tailored as his suits. He was known for his spartan drum setup, without the bells and whistles of his peers. Here is what he said about his role and approach to his art: “I don’t like drum solos,” Watts said. “I admire some people that do them, but generally I prefer drummers playing with the band. The challenge with rock ’n’ roll is the regularity of it. My thing is to make it a dance sound — it should swing and bounce.”

Keith, who posted a forlorn image of a drum kit with the sign “Closed” on it, was openly appreciative of Watts over the years (unlike his public history of feuds with Jagger). “Everybody thinks Mick and Keith are the Rolling Stones. If Charlie wasn’t doing what he was doing on drums, that wouldn’t be true at all. You’d find out that Charlie Watts is the Stones.” It was Richards who —ironically, given his own long, public struggles with drug use, including famously being arrested for possession in Canada — was the one to tell Watts it was time for him to clean up his act back in the ’80s.

Jagger posted a photo of a smiling Watts to Instagram yesterday in tribute, with no words. The lead singer had a couple of run-ins with the drummer (who once punched Jagger in the nose). Then there was the legendary “my drummer” saga. Circa 1984, Jagger yelled down a phone line at an MIA Watts, “Where’s my drummer?” Watts lost it, responding to the frontman, “Don’t you ever call me ‘your drummer’ again. You’re my f*****g singer!”

There are many bloopers (and even burps) on the rare vinyl bootleg Stones albums my generation used to seek out in indie record import shops. But one shout-out that made it into a mainstream album. The live concert Get Your Ya-Ya’s Out, recorded in 1969, features Jagger making a grand understatement, “Charlie’s good tonight, ain’t he?”

The tributes from peers were more effusive. Paul McCartney called him a rock, concluding his video message with the tender, “Love you Charlie, I’ve always loved you. A beautiful man.” Ringo Starr wrote, “God bless Charlie Watts we’re going to miss you man peace and love to the family.” Elton John called him “the ultimate drummer. The most stylish of men, wonderful company.” While The Who’s Roger Daltrey called Watts the “perfect gentleman, as sharp in his manner of dress as he was on the drums.”

In the end, the image of a devoted family man is what stands out about Charlie Watts, a man who was the background backbone of a famously debauched band, in a famously debauched industry. A man with a secure and solid sense of himself, while all around him swung their egos. Watts’ jazz and his horses, his careful way of dressing and careful way of (not) speaking or showing off — these little details of his personal life and personality, shared sparsely through his decades in the public eye, are how we put together our collective image, and appreciation of him. Luckily, he left a large legacy of music behind, and we will always have the albums so his beat lives on.

George Clinton Turns 80: The Godfather of Funk Trades Hard Living for Longevity as He Preps For (Another) Farewell Tour