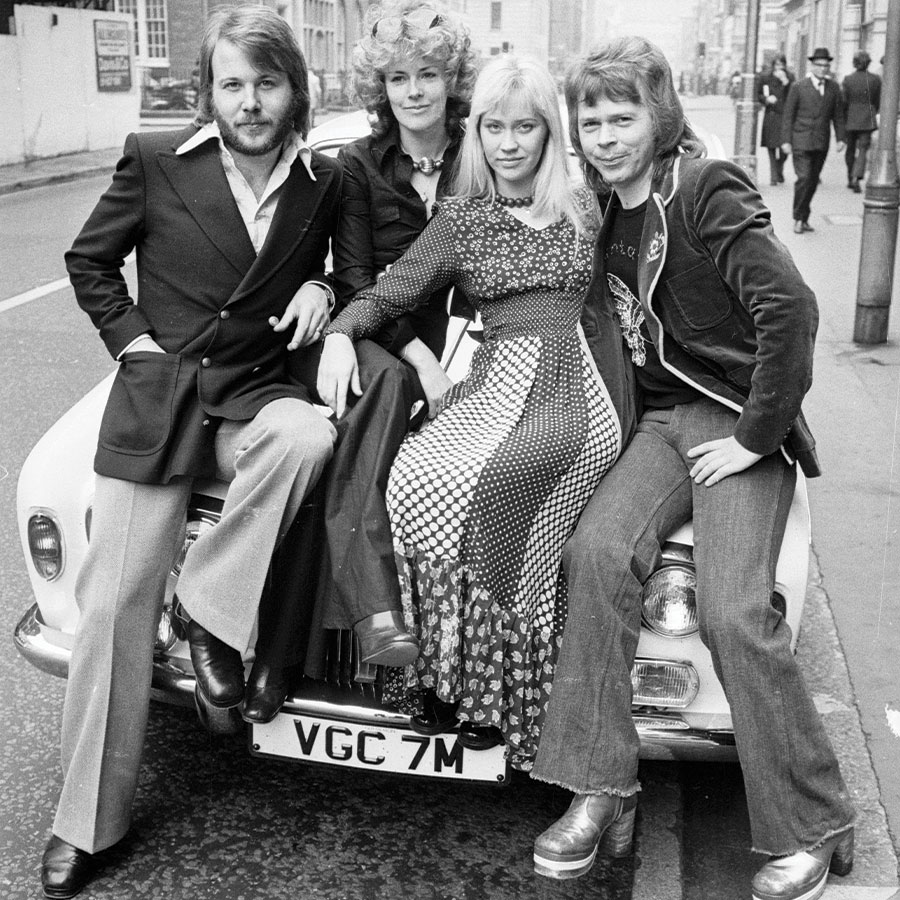 It’s time to dust off your sequinned bell bottoms and dancing shoes: ABBA is back.

At a press conference in London on Thursday — webcast to more than 200,000 pre-registered viewers around the world — the Swedish pop group announced a new album, which will be released worldwide on November 5. Bjorn Ulvaeus and Benny Anderrson, the songwriting, male half of the fab foursome (vocalists Agnetha Faltskog and Frida Lyngstad sent their regrets) also previewed two new tracks from the record.

Those songs — “I Still Have Faith in You” and “Don’t Shut Me Down” — are the first new music from ABBA in almost four decades, an almost unprecedented “break” in pop music history. In an accompanying statement, the band made light of the time. “They say it’s foolhardy to wait more than 40 years between albums, so we’ve recorded a follow-up to The Visitors. We simply call it Voyage and we’re truly sailing in uncharted waters.”

Those waters include plans for a concert residency in a custom-built “ABBA arena” in London, which will open next summer.

“The main inspiration to record again comes from our involvement in creating the strangest and most spectacular concert you could ever dream of,” the band said in their statement.

The concerts will feature digital holograms of younger versions of the band members (circa 1979), created with the technical expertise of Industrial Light and Magic effects company over the last several years. Each of the foursome was digitally mapped by 160 cameras during five weeks of performances to create hauntingly convincing, de-aged avatars (already being referred to as “ABBAtars” online) which will perform a 22-song set with a live ten-piece band.

“We’re going to be able to sit back in an audience and watch our digital selves perform our songs on a stage in a custom-built arena in London next spring. Weird and wonderful!”

Pre-registration for tickets opened Thursday, immediately following the press conference (a general ticket sale will follow on September 7); the demand for tickets (linked to pre-orders of the new record) was so heavy the ABBA site promptly crashed.

While that demand might seem surprising — one might balk at paying to see a pre-recorded hologram concert — it’s fitting for the return of one of the most successful bands in pop music history.

After years of apprentice work and early singles, ABBA was formed officially in Stockholm in 1972. The members were two married couples: Bjorn Ulvaeus and Agnetha Faltskog and Benny Anderrson and Anni-Frid (Frida) Lyngstad.

In 1974, their song “Waterloo” became an international hit following its winning performance at the Eurovision Song Contest. Over the next decade, the band became superstars, with eight consecutive number one albums in the UK alone, and a string of hit singles that is almost unrivalled in sheer pop perfection (songs like “Dancing Queen,” “Mama Mia,” “Take A Chance on Me,” and “Does Your Mother Know” will now be stuck in your head, just from reading the titles). Their success, however, took a personal toll, with both marriages ending under the pressure of celebrity before the band simply stopped working in late 1982. There was no formal announcement of a break-up or a hiatus, but the band members segued quickly into solo careers. Since their unofficial break, the four band members have only performed together once, in 2016, to mark the 50th anniversary of Andersson and Ulvaeus’ meeting.

The force and appeal of their music, however, continued in their absence. The ABBA Gold compilation, released in 1992, achieved Diamond status in Canada, and was their first album to top the Billboard charts in the US (it has gone six-times Platinum in the United States). In total, the band has sold an estimated 400 million records over their more than 50 year history. And that doesn’t take into account the success of Mamma Mia!, the Broadway musical based on their music, which has toured the world and spawned a highly successful movie franchise.

The new album and concert have been in the works for several years, delayed by the pandemic. The question, though, is why? What do they have to prove? Are they risking the weakening of their impressive legacy?

The truth, as it has always been for ABBA, is in the music. The two new singles have an immediate, visceral effect: it’s as if the last 40 years have disappeared. Playing “I Still Have Faith In You,” one is plunged into the instantly recognizable, familiar warmth of ABBA’s music: the song is new, but it feels like something we’ve known forever even on a first listen. It might not be an instant classic, but it’s got all the ABBA hallmarks, after all this time.

And the band’s timing, even after 40 years, is perfect. The pandemic may have delayed their return, but it is difficult to overstate the sheer joy the new music provides in these dark times. We all need an escape right now, but we also need a sense of stability, of continuity.

As well, at a time when some of our musical idols are falling (the loss of Rolling Stones’ drummer Charlie Watts last month is just a single, painful example), it is truly joyful to see such new life, rooted firmly in the past.

That said, the band is also turning to the futuristic — and possibly the future of concert touring — at the same time, with their de-aged performing hologram ABBAtars adding a distinctly 21st century element to the legendary 1970s sound.

The band could be speaking for all of us when they say, “with the help of our younger selves, we travel into the future. It’s not easy to explain but then it hasn’t been done before.”

Here They Go Again: ABBA Reunite For First New Album in 40 Years and a Virtual Tour