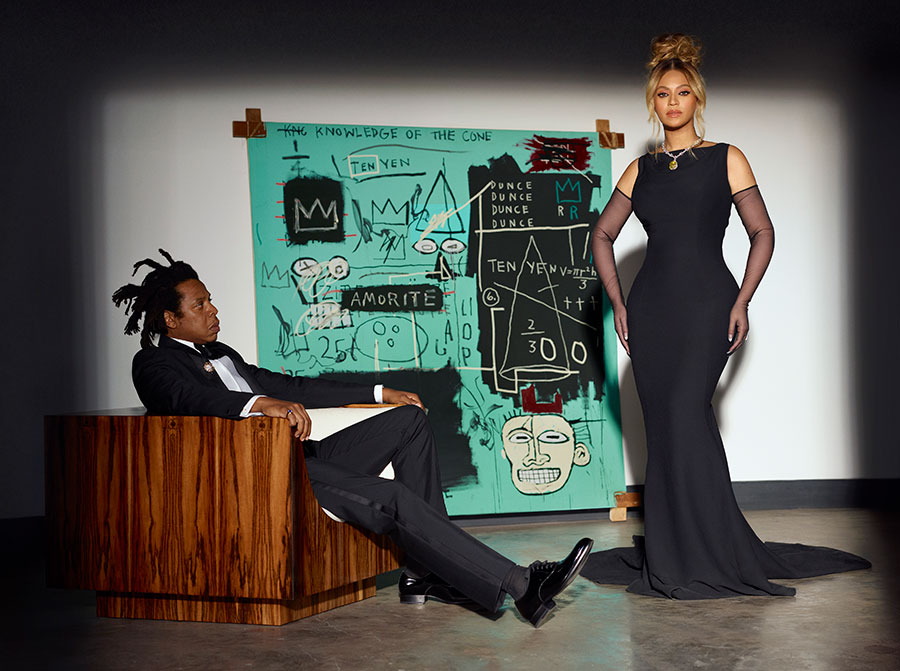 At 287.4 carats, the Tiffany Yellow Diamond is among the largest diamonds ever found. Polished into an 82-facet cushion shape, the finished gem came out at 128.5 carats. For an idea of how massive that is, the famed Koh-i-Noor is ‘just’ 105.6 carats and the Hope Diamond a mere 45.5.

Save sojourns for display at the Smithsonian, the legendary rock is housed in a vault-like vitrine on the main floor of Tiffany & Co.’s Fifth Avenue flagship in Manhattan — the shop that Audrey Hepburn peered into longingly on her early morning stroll home from a party in Breakfast at Tiffany’s. The 1961 film morphed the jewelry house into a pop culture icon, and Hepburn wore the Yellow Diamond to promote the movie.

But that was 60 years ago — back when New York socialites and pearl-studded uptown girls were the height of chic.

Enter Beyoncé, 39, and the face of the newly reinvented, 21st century Tiffany & Co. Channeling Hepburn in opera gloves, black gown, and an updo for the classic brand’s modern campaign, the US$30 million yellow gemstone looped around her neck, Beyoncé, is only the fourth woman to wear the fabled diamond. Dubbed “About Love,” the publicity coup also marks the first endorsement the 28-time Grammy winner has done with her husband, rapper and entrepreneur Jay-Z, 51.

Photographed at the Oram Residence — a Zoltan Pali-designed Bel Air mansion personally selected by the couple as the setting — the diamond drenched duo (broach and cufflinks for him) pose in front of Jean-Michel Basquiat’s Equals Pi. The turquoise blue 1982 work mirrors Tiffany’s signature hue — the punky Neo-expressionism of the world’s most important Black artist meant to further underscore the progressive cool of the rebrand. Jay-Z’s own hair is styled in the chunky, matted dreads favoured by the painter.

So far, so fabulous. The multi-faceted promotional rollout will also include a video of Beyoncé singing her rendition of the Breakfast at Tiffany’s classic, “Moon River.” Shot by Jay-Z on a Super 8 camera and directed by her Black Is King collaborator Emmanuel Adjei, it will be released this September — the same month Beyoncé appears on the cover of Harper’s Bazaar’s annual Icons issue, draped in diamonds, for which Tiffany’s is the sole advertising sponsor.

Also, as part of the deal, Tiffany & Co. will donate US$2million to scholarship and internship programs for Historically Black Colleges and Universities (HBCUs). Though a US$30 billion luxury brand offering a mere $2 million to be spread across America’s 107 HBCUs (approximately US$18,700 per school) seems a fairly transparent act of performative wokeness.

It’s all very on brand for LVMH, the new parent company of Tiffany & Co. As reported in early August, the jewelry house is in the midst of a radical revamp. LVMH, keen to shake the dust off of a heritage label, employing its signature strategy of turning a traditional label on its head to inject it with new life. This is the brand behemoth that reimagined Dior with John Galliano-designed newspaper dresses “inspired by the homeless” that scandalized the fashion press, and reinvented Louis Vuitton with Marc Jacobs as creative director, with an embrace of blingy, logo-obsessed ‘90s rap culture.

The point is attention. Lots of it. LVMH has never shied away from shock value if it gets tongues wagging. As cited by Harper’s, the brand-performance site Launchmetrics found that the Tiffany’s partnership with the power couple had garnered US$10.5 million in “media impact value” in its first week alone — numbers that would only be pushed by a splash of scandal. Only this time, LVMH’s “any press is good press” marketing ethos is strained.

To begin with, many took umbrage with Tiffany for pointing to Beyoncé as the first Black woman to wear the diamond. Given that the venture is more of a corporate transaction — LVMH bought a 50 per cent stake in Jay-Z’s luxury Armand de Brignac champagne brand earlier this year for approximately US$300 million — than an important step forward for Black people.

As well, there was widespread disdain at the clumsy corporate co-opting of the Basquiat legacy — a pointedly anti-establishment artist. Having purchased Equals Pi for an undisclosed sum that could only be in the tens of millions, Tiffany & Co. announced that the painting would be on display in its Fifth Avenue flagship.

“We don’t have any literature that says [Basquiat] made the painting for Tiffany,” executive vice president of product and communications, Alexandre Arnault, told WWD. “We know he loved New York, and that he loved luxury and he loved jewelry. My guess is that the painting is not by chance. The colour is so specific that it has to be some kind of homage.”

Really, sniffed the internet. Tiffany’s millennial marketing guru feels entitled to presume that one of Basquiat’s works is an homage to the brand he’s currently looking to infuse with fresh, um, colour? In the wake of that statement, Stephen Torton, Basquiat’s former assistant, took to social media to dismiss that idea. “The idea that this blue background, which I mixed and applied, was in any way related to Tiffany Blue is so absurd that at first I chose not to comment. But this very perverse appropriation of the artist’s inspiration is too much.”

As well, friends and former collaborators of Basquiat have gone public with their dismay at the artist’s work being used in such a blatantly commercial venture. One friend, Alexis Adler, told The Daily Beast that “the commercialization and commodification of Jean and his art at this point — it’s really not what Jean was about.” Torton, meanwhile, added in the same piece that “They wouldn’t have let Jean-Michel into a Tiffany’s if he wanted to use the bathroom, or, if he went to buy an engagement ring and pulled a wad of cash out of his pocket. We couldn’t even get a cab.”

Having just come off a series of pre- Beyoncé ads that insulted the jewelry house’s loyal, long-time clientele with its “Not Your Mother’s Tiffany” tagline, the 28-year-old Arnault — son of LVMH owner, Bernard Arnault — might want to study one of Basquiat’s more famous works, Obnoxious Liberals.

In related, but far worse news, the campaign saw the internet explode in outrage that Beyoncé — who’s been an advocate for Black rights for years — would star in an ad wearing a “blood diamond.” Social media ablaze with indignation, the singer remained silent as her mother angrily responded to the backlash.

“How many of you socially conscious activists own diamonds? I thought so,” Tina Knowles clapped back on Instagram. “Did you check to see where [your] diamond came from? Probably not. When you guys get engaged … put on a sterling silver band … because [you’re] righteous!!”

Is the criticism correct? Let’s take a look at the history of the stone.

Also known as “conflict diamonds,” gems bartered to fund wars have been rightly verboten since the 1990s when a precise definition of the term “blood diamond” was outlined by the UN in reference to brutal civil wars in diamond-rich areas of West-Central Africa. Specifically, Angola, Sierra Leone and the Congo.

The Tiffany Yellow Diamond doesn’t actually fall into this category. It was purchased from the Kimberley mine in South Africa by Charles Tiffany in 1878 when the country was a British colony.

However, the social media morality squad is condemning Beyoncé for wearing a diamond excavated under abusive colonial labour practices that are symbolic of the ills of historic racism.

That’s a fine hair to slice for Beyoncé — a pop star whose brand is so deeply rooted in Afrocentric affirmation, from high-profile projects like the musical Black is King through to Black Panther-inspired Superbowl performances.

That a ‘chic’ brand would botch nuance and subtext is hardly shocking. The fashion industry often proves itself spectacularly maladroit at the intersection of race, cultural values, and style. Consider such highly foreseeable — and recent — bungles as Gucci’s blackface turtlenecks (2019), Prada’s Sambo key fobs (2018), or Dolce & Gabbana’s ‘eating with chopsticks’ fiasco (2018), which saw the Italian designers deserted by the Chinese market while nearly ruining Chinese model Zuo Ye’s career.

That Beyoncé and Jay-Z would get it wrong is surprising. Savvy entrepreneurs as much as entertainers, the Carters should be aware of what’s on brand for them.

According to comments leaked to the press, Beyoncé feels “disappointed and angry” that she wasn’t “made aware” of the diamond’s past. Except that a one-minute Google search could have predicted the fallout of this particular celebrity wearing that specific diamond. Certainly, Tiffany has other impressive sparklers on hand and Beyoncé can’t put the blunder down to not being “made aware” when her brand is centred on Awareness.

Overwrought yet underthought, a campaign aimed at reinvigorating an old school brand with modern cultural clout is evocative of exactly the opposite — a corporate behemoth’s ham-fisted conscription of Blackness given an assist by the movement’s most glittering advocates. Oops.

“I’m not a businessman, I’m a business, man”, boasts Jay-Z in the remix of “Diamonds from Sierra Leone,” a swaggering 2005 Kanye West hit that’s official video kicks off with these words:

“Little is known of Sierra Leone,

and how it connects

to the diamonds we own.”

A song about blood diamonds, remixed with what are arguably Jay-Z’s most widely known lyrics, so oddly prophetic in view of the current Tiffany fracas.

It’s enough to make a superstar pine for the not-so-olden days when she’d merely have to wrap herself in acres of mink and be immortalized for Blackglama’s prestige “What Becomes a Legend Most?” campaign.

Simpler times. Until, of course, PETA got involved.