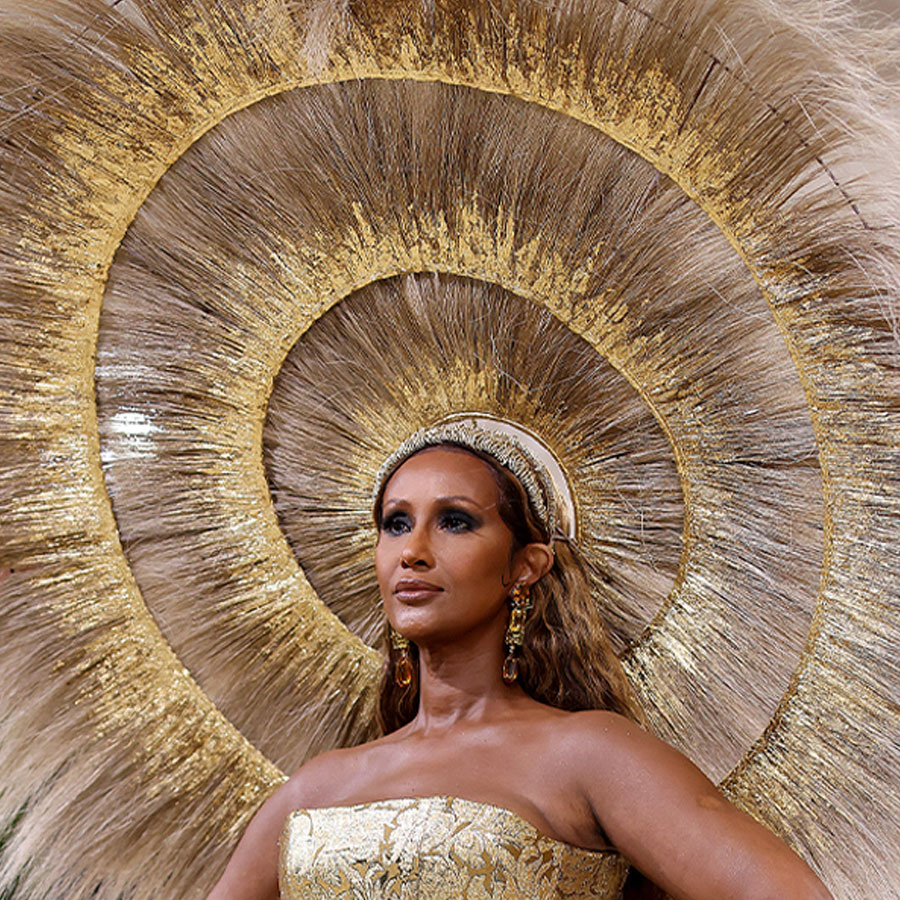 After a year and a half hiatus, the Oscars of Fashion is back with a US$3.5 million celebration of sartorial extravagance that, this year, also marked the 75th anniversary of the Costume Institute.

Of course, this is also the soiree that Katy Perry arrived at dressed as a chandelier in 2019. Unlike other celebrity-drenched red carpet events, high style at the Met fete is less about Best Dressed than it is about Most Outrageously Attired and clothing that makes as much of a cultural, as fashion, statement. Here are some of 2021’s most attention-grabbing looks.

The legendary supermodel, 66, dazzled in a gold-feathered gown and massive radiant headdress by British-American Harris Reed.

The eccentric Canadian musician and Elon Musk consort, 33, hit the red carpet in an eye-catching Dune-inspired gown by Iris Van Herpen ensemble accessorized by a silver sword inspired by a Colt AR – 1583 and mask.

The Biden Inauguration Day bard and Met Gala co-chair, 23, accented her sheer blue Vera Wang gown with a “Give Me Your Tired” bag that honoured the Statue of Liberty poem.

The beloved Blondie singer, 76, went full Americana, saluting the red, white and blue in denim and a distressed hoop skirt by Zac Posen.

In a ruffled cape dress by Louis Vuitton, the 23-year-old tennis champion’s finger-in-the-electric-socket hairdo rendered her among the evening’s Met misfires.

The genre-bending rapper, 22, went with a trio of gilded futurist ensembles by Atelier Versace.

The congresswomen took a political stance with Maloney, 75, donning an Equal Rights Amendment gown while the younger firebrand, 31, flagged her signature maxim —“Tax The Rich”— in a dress by Canadian designer Aurora James. James is doubling down on a socially conscious bent — in the wake of the Black Lives Matter protests, she created the 15 per cent pledge, which challenges retailers to be more inclusive and represent brands by designers of colour.

Also scoring a political point, the British supermodel, 29, poked her thumb in the eye of the patriarchy in Christian Dior’s ready-to-fight fencing vest.

Channelling the American West, Lopez, 52, opted for gunslinger chic in a high slit, plunge dress by Ralph Lauren accessorized with a cowgirl hat and statement necklaces.

Venus, 41, went for classic elegance in strapless red silk and an exaggerated topknot while Serena, 39, went with galactic glam in a star-spangled jumpsuit and an ombré feather cape.

Staying on theme of her estranged husband Kanye West’s Balenciaga immersion for his Donda album release, the influencer and Skims billionaire, 40, made a dramatic entrance to the glittering fashion fete, shrouded in funereal black.

What’s more all American than denim? Nailing the evening’s theme in a strapless Versace that referenced Old Hollywood Westerns, the diamond draped 38-year-old actress finished her look with a sculptural afro-bouffant.

A former co-chair, the Met vet, 33, made her 7th appearance at the ball covered up ala Kim Kardashian in a voluminous Balenciaga couture wrap coat.

The Campiest Celebs Celebrate Camp-Style at the MET Gala