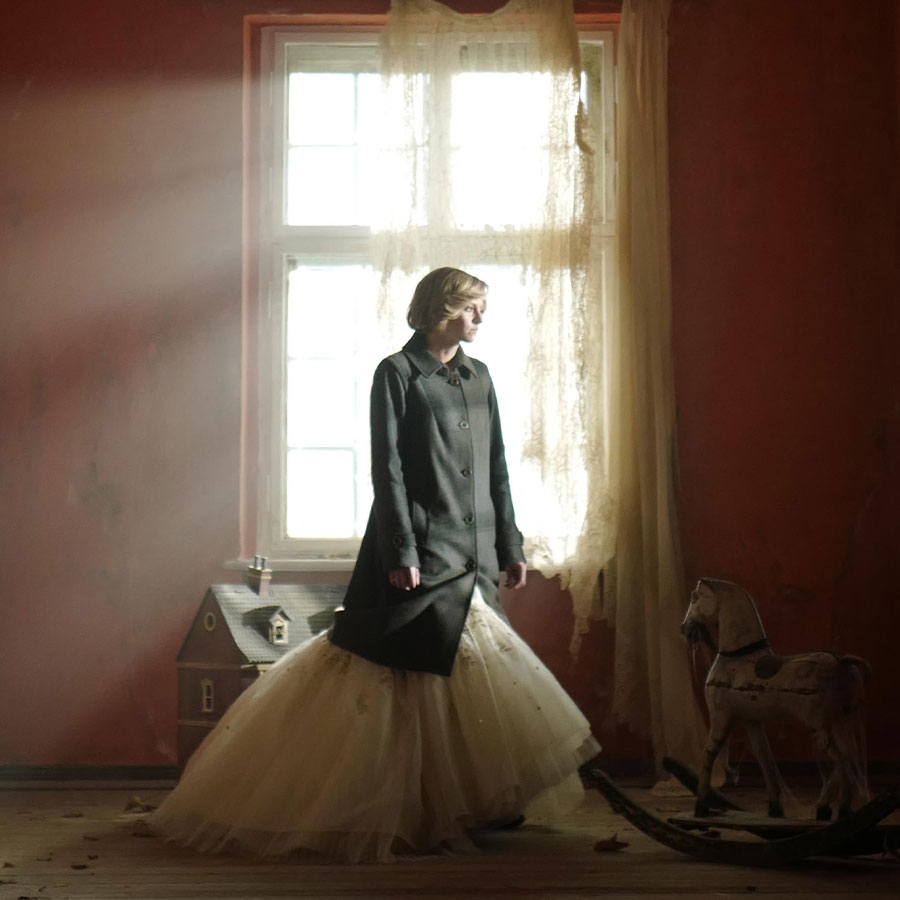 Spencer — Chilean director Pablo Larraín’s much-hyped film about Diana, Princess of Wales — had its world premiere at the Venice International Film Festival earlier this month before heading to the Toronto International Film Festival this week. Shot on location in England and Germany during the pandemic, the film explores the breakdown of Princess Diana’s 15-year marriage to Prince Charles and supposes the day when she decided the marriage was over.

Last year, The Crown‘s season four finale depicted a 1990 royal family Christmas; here we get a take on the same holiday at Sandringham House, the Queen’s 20,000-acre royal estate in Norfolk.

In the film, it’s 1991. Princess Diana (played by Kristen Stewart) and Prince Charles (Jack Farthing, of Poldark, in an interpretation that’s emotionally stunted and duty-bound rather than cruel or self-centred) are in attendance with their sons William and Harry.

Before The Crown (and with few exceptions), most contemporary royal retellings about the Windsors tended to be on the small screen in modest cable movies, hastily produced to capitalize on the latest developments and news cycle hype. Because they usually landed quickly on the heels of the real-life events they depicted, they tended to mirror headlines in broad strokes before the full facts of the story came to light or were ripened by time and perspective. All of these fictions, by their nature, were embellished and speculative. But, like The Crown, Spencer has the benefit of long hindsight and years of revelations — although the movie has less time to spend developing nuance. It comes with a disclaimer that it’s a fable inspired “from a true tragedy.”

But is there anything new to say about Diana, Charles and their ill-fated union? And does the character-driven Spencer have anything to add? We took a deeper look to find out.

Getting Inside Her Head

As he did with Natalie Portman imagining Jacqueline Kennedy in the immediate aftermath of President Kennedy’s assassination in Jackie, director Larraín explores the psychological state of Princess Diana as woman on the brink.

“Making Jackie (2016) has made me even more interested in discovering and revealing the intimate personalities of women who changed the face of the 20th century,” Larraín says in his director’s statement. “Both Diana and Jackie built their identities by themselves, not necessarily connected with the men they were married to. Both understood how to use the media of their times to convey certain versions of themselves to the outside world, though they did so in very different ways.”

In Spencer, Diana is fixated on revisiting nearby Park House, the now-dilapidated property within the Sandringham estate where she spent part of her childhood until the age of 14, when she was still known by her family name Spencer. Eating, drinking, shooting, and hunting are on the three-day agenda. So are interactions with the ghost of Anne Boleyn, whose biography Diana is reading and manifests as a cautionary tale at convenient narrative moments.

“The day I walked down the aisle at St. Paul’s Cathedral, I felt that my personality was taken away from me, and I was taken over by the royal machine,” is how Diana put it in her Panorama interview with Martin Bashir in 1995.

As Zoomer recently detailed, many actors have played Diana in the past, from Catherine Oxenberg to Australian actor Naomi Watts and, most recently, Emma Corrin and, soon, Elizabeth Debicki, on The Crown.

Kristen Stewart, meanwhile, is the first American actress to win a French César (for The Clouds of Sils Maria), but is still best known for playing lovelorn Bella Swan in the young adult Twilight movies. Here, she’s got the signature feathered blond Diana coif though, thankfully, doesn’t much attempt the trademark averted gaze of the princess (who once revealed that she kept her chin down out of shyness) or even the plummy accent. There are, however, sound-alike moments of cadence and inflection.

What resonates most, though, is the emotional truth of her portrayal (especially in nice scenes of her and her sons that hint — especially in exchanges with impish young Harry — at recent events in their lives) and the poignancy of her impossible situation.

There’s a palpable lack of warmth — both figurative and literal — in this film. At one point, for example, Diana and her boys are literally cold but, rather than simply turning the heating up, staff give them more blankets and coats to wear. Her Majesty the Queen (Stella Gonet) barely speaks and, only then, to reinforce the idea of royals as currency that runs throughout the movie.

Few of the family speak with one another or Diana; instead, the movie hews closely to the publicly known facts and Charles/Diana relationship arc and timeline, all while imagining scenes of her inner anguish and not-so-secret turmoil and interactions with those closest at hand — the household staff. She attempts to cultivate relationships with them and enlist their aid. In the vast country house kitchens festooned with Mauviel copper pots, for example, the head chef Darren (a magnificent Sean Harris) solicitously prepares the princess’s favourite dessert: crêpe soufflé d’abricot. He’s one of the many who are tenderly protective of Diana, as far as their job security permits (and occasionally, beyond) but, ultimately, must be loyal to the institution above all.

Whether simply following commands or genuinely concerned, they all take their marching orders from Timothy Spall’s Major Gregory, an equerry on loan from Clarence House (residence of the Queen Mother at the time) to keep both Diana in line and the prying paparazzi lenses at bay.

Spencer is strongest when it’s exploring the complex calculus of the household vis à vis being torn between their roles and responsibilities as staff and their human empathy, and how they are as powerlessness to step out of their roles as she is.

Another emphasis in Spencer is the gulf between how things appear to the public (captured on camera) compared to the truth and reality. The discrepancy is underlined with the keeping up of appearances sub-plot involving the rolling rack of Diana’s approved Christmas outfits, as dispensed by her assigned local dresser and sometimes-confidante Maggie (Sally Hawkins). But even Diana’s small attempt at rebellion by disrupting their prescribed timing is thwarted. Each ensemble is assigned an event through monogrammed hangtags bearing the insignia “POW Diana” — “Princess of Wales,” but also the acronym for “prisoner or war,” recalling the military precision of the opening arrival and preparation scenes.

The princess is beginning to crack under the pressure of expectations and constrictions and the weight of her husband’s betrayal with Camilla Parker-Bowles. But not unlike the household staff, she too is expected to be seen but not heard. The extended family Christmas on the estate has all the precision of a military operation (and between the orderly marching of staff troops carrying countless hampers bearing the Queen’s royal cypher “ER II,” security concerns, and the tightly planned and controlled schedule, it is).

The head chef reads the litany of his elaborate holiday menus and barks his commands to the brigade (“Yes, Chef!”). Large signs cautioning against noise and chatter loom everywhere (“They Can Hear You”) and point out the ubiquity of surveillance — and the impossibly of any privacy — for those both above and below stairs. At one point, Diana suggests, they can even read the thoughts in her head.

Spencer was filmed in part at Nordkirchen Castle — a historic German schlösse standing in for Sandringham — and the holiday is basically a succession of meals and photo calls. Accordingly, the royal protocol consultant listed in the credits (among the corgi, pheasant, and golden retriever wranglers) is Martin Dibben, a hospitality expert.

Production designer Guy Hendrix Dyas and set decorator Yesim Zolan must surely also have overseen a team of food stylists for the towering repasts (including the gorgeously laid larder the princess creeps down to for a midnight snack). At one point Diana tears at her pearl necklace and, as the pearls tumble into the vichyssoise, she spoons them up (here, I thought Spencer might veer into Peter Greenaway territory; The Cook, The Thief, His Wife, and Her Lover came to mind). It’s a moment of “What if The Crown creator Peter Morgan did arthouse films?” But the scene soon returned to relative normalcy.

Though, unlike recent episodes of The Crown, this film comes with no eating disorder trigger warning for the frank and graphic depictions of Diana’s bulimia throughout the movie. Consider yourself warned: the dramatic gown image used in the poster is actually lifted from a scene of the wretching princess crouched over a toilet.

At the obligatory Christmas Day pose outside church, and with some resignation and resentment from the other royals, Diana is the main attraction. The princess flounces around in Mouawad jewellery, boxy 1990s blazers, two-tone flats and quilted handbags by Chanel, a luxury brand she favoured before the divorce (and even afterwards, in spite of the interlocking C monograms that reminded her of Charles and Camilla). For Christmas dinner, she wears a Chanel gown from Spring/Summer 1988, entirely recreated for the movie in the Chanel ateliers (more than 700 hours for embroideries alone).

The costume design is where attentive viewers will spot Canadian content. Diana often wore regimental ball caps to and from the gym (a heraldic RCMP was a favourite) and watchers will notice that for Spencer’s final close-up, Stewart’s Diana sports a vintage crested cap from the Ontario Provincial Police. A montage also recreates some of her key fashion moments (including her pouffy 1981 wedding gown by David and Elizabeth Emanuel) although the most potent sartorial moment is when she purloins her late father’s scruffy red Barbour jacket from a scarecrow.

An aerial view of the tidy, symmetrical estate reinforces the sense of order and isolation

Spencer screens at TIFF on Wednesday, Sept. 15 before landing in theatres for wide release on Nov. 5.