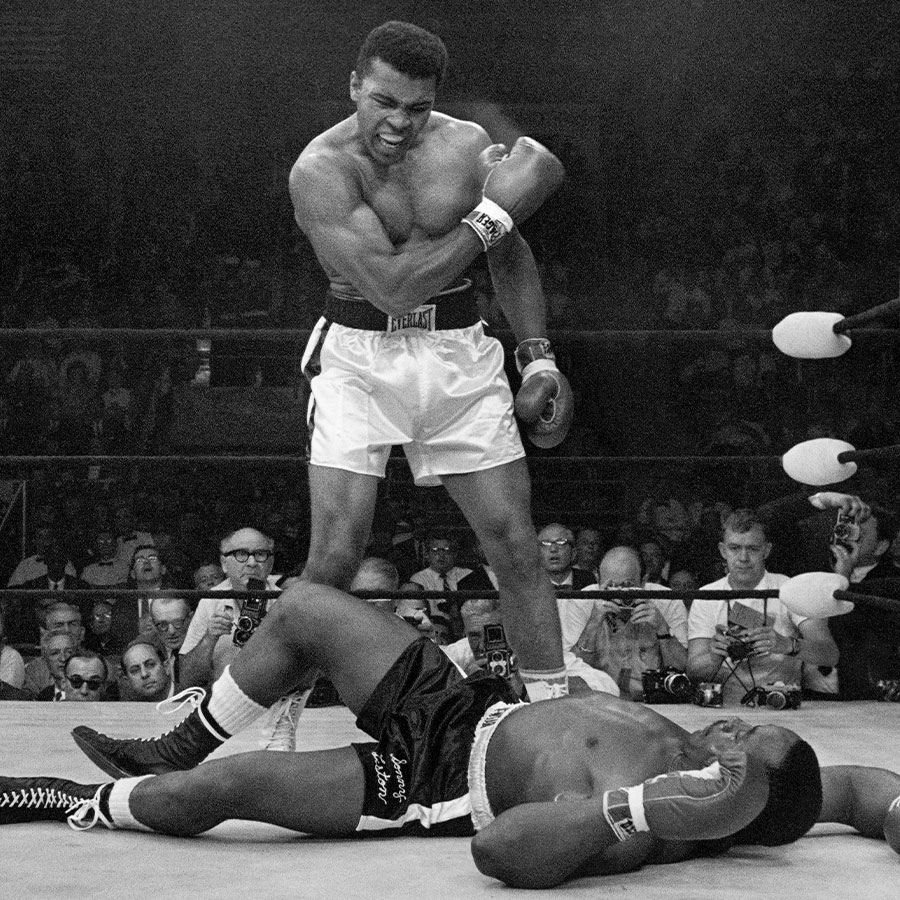 Muhammad Ali stands over a fallen Sonny Liston, shouting and gesturing shortly after dropping him with a short hard right to the jaw in Lewiston, Maine on May 25, 1965. Ali won the fight via first-round knockout and this image became one of the most famous sports photographs of all time. Photo: Courtesy of John Rooney / AP Images / PBS

In February of 1964, right before Muhammad Ali fought Sonny Liston for the heavyweight championship of the world at age 22, the boxer stepped into the ring with four other lads in their early twenties who were also The Greatest in their own field — The Beatles.

Ali — still known as Cassius Clay then — was training for the fight in Miami. The Beatles were there to perform at a local hotel for their second appearance on The Ed Sullivan Show.

Ever the showman, Ali posed with all four mop tops cowering in the ring. It was a knockout ‘60s moment, caught on film and now part of the remarkable history that is Ken Burns’ latest opus, Muhammad Ali.

The four-part, eight-hour documentary, directed by Burns and written and co-directed by his daughter Sarah Burns and David McMahon, airs September 19-22 on PBS. And that seminal moment when The Beatles and Ali came together holds great significance for Burns.

“All of my films are about love,” says the 68-year-old filmmaker, who, for 40 years on PBS, has profiled everyone and everything from Ernest Hemingway and Jackie Robinson to The Roosevelts; from The Civil War and jazz to baseball.

Sure, “they’re about American history,” Burns continues on the phone from his home in New Hampshire, “and sometimes there’s some very dark aspects. But they’re also about love.”

Burns calls that Ali/Beatles encounter, “an amazing convergence of people who got it, who understood and would define a kind of positive force for the next thing, and continue to, even in their absence.”

Muhammad Ali: A Life of Contradictions

If it seems incongruent for a film about someone who beat people up for a living to also be about love, the story of Muhammad Ali is nothing if not about contradictions. He was a fighter who refused to fight in Vietnam. He was a hero, particularly in the Black community, who taunted African-American ring rivals as “Uncle Toms” or worse.

“He wasn’t the nicest guy in the world,” former heavyweight champion Larry Holmes, the only man to stop Ali in the ring, told TV critics several years ago in Los Angeles.

Ali would call arch ring rival Joe Frazier a gorilla and, as Holmes reminded reporters, “you guys liked it. You guys thought it was funny. We didn’t think it was funny at the time.”

Over the seven years he worked on Muhammad Ali, Burns endeavoured to tell the complete story, warts and all. Yes, he acknowledges, there have been many terrific documentaries about Ali, but none that were “soup to nuts comprehensive in terms of the arc of his life,” from his birth in Louisville, Kentucky, in 1942 to his death from Parkinson’s in 2016.

Fans may nitpick that Burns left certain things out. Did Ali, for example, throw his 1960 Olympic gold medal into a river after being denied service at a Louisville lunch counter?

Never happened says Burns who, like his subject, knows how to cut and jab.

“It’s a documentary, not an encyclopedia. If it was, you wouldn’t watch. The law of storytelling doesn’t permit you to put everything in. The law of telephone books does. We made the series on baseball 18 hours, and all of my mail is about what we left out.”

Telling Ali’s story in eight hours, “involved letting lots of things go,” Burns says before nailing you with a sneaky right. “So I would suggest that you endeavour to make your film on Muhammad Ali.”

There is no need. Among many other attributes, the documentary features dazzling footage from Ali’s major fights.

Burns brings viewers ringside again for that bout with Liston. Then boxing as Cassius Clay, Ali ducked, clung, and somehow blinked his way through a round where his eyes were stinging with liniment. He came back and dominated the sixth round, winning the title when Liston remained on his stool for the start of the seventh. Ali won the title again ten years later in Zaire, outfoxing another fearsome slugger in George Forman in 1974’s “The Rumble in the Jungle.”

In these clips, as in Ali’s third and final fight with Frazier (1975’s “Thrilla in Manila”), the boxing scenes are crisp and a cut above the blurry video that pops up on Facebook or YouTube.

Obtaining rights to, in some cases, original, 35mm negatives of these fights — and then raising money to pay for them — is part of why it took Burns seven years to tell this story.

Perhaps the most astounding footage is from the 1966 fight against Cleveland “Big Cat” Williams. “It’s pretty spectacular,” agrees Burns, noting you can read advertising in the background of the Houston Astrodome.

There are also a few scenes from Ali’s two fights in Toronto against Canadian heavyweight champion George Chuvalo. Ali took those fights lightly, but Chuvalo never went down and took the champ the distance both times, “a tribute to him against the greatest boxer of all time.”

An Athlete Ahead of His Time

Then there were Ali’s fights outside the ring. He risked prison over his refusal to be inducted in the U.S. army and fight in the Vietnam War. He was stripped of his title and lost three-and-a-half years before being permitted to resume his boxing career. His steadfast commitment to his Muslim faith, and his complex relationships with Malcolm X and Nation of Islam leader Elijah Muhammad, cost him dearly in terms of fan support and outside endorsements. He was a “prophet of love,” to use Burns’ phrase, who was habitually unfaithful and married four times.

More than the tale of just one man, Ali’s story was all about “things we’re talking about now, still,” says Burns, including, “race and sports and politics and war and faith and religion, Black power, the idea of blackness itself and black masculinity.”

In addition, the last two hours deal with Ali’s later years, when age and, especially, Parkinson’s’ muted his skills, presence and voice. Yet he emerged as a symbol of hope and strength, shocking the world all over again in 1996 as he lit the torch through Parkinson’s tremors at the Atlanta Olympics.

“Here you have the most gregarious talker that ever graced the sports world,” says Burns. “And in some ways, he couldn’t really speak until he couldn’t speak.”

Though he was “imprisoned, in some ways, by Parkinson’s,” Burns says Ali was “liberated in many other ways and dies the most beloved person on the planet.”

The Magic of Muhammad Ali

The director did meet Ali once. It was by chance at a coffee shop in Los Angeles. With Ali already silenced, the two exchanged knowing glances.

This writer also had a brief but magical encounter with The Greatest. It was at a Television Hall of Fame event in 1993. Howard Cosell, Ali’s loquacious broadcasting foil who was, at that point, too sick to attend, was being honoured.

I spotted Ali standing with other attendees in the foyer prior to the ceremony. I walked up, introduced myself as a fan from Toronto and told him I had listened on the radio to a blow-by-blow account after each round of the fight with Foreman in Zaire.

I was in high school at the time and had an art assignment due the next morning. I had to carve something — ironically — out of a block of clay. As Ali got hit early with lefts and rights, I pounded away at the clay with hammer and chisel. By the time Foreman was rope-a-doped into submission, the sculpture was done. I brought it in the next day and got an “A.”

Story over, what happened next astonished me. Ali, shaking as he put down a briefcase, stood tall and made a large, red scarf disappear in his left hand. Then he showed me the scarf tucked into a fake thumb.

I stood there, in awe, floating like a butterfly.

As he does, Burns put Ali’s life in perfect perspective.

“We live in an era, and perhaps most eras, that is transactional. And this was a transformational figure. That means he touches people, and he transforms material, as your art teacher noticed you had done.

Harry Belafonte Turns 94: Celebrating His Legacy, From Music to Activism to Hosting “The Tonight Show”

The Beatles: 5 Fascinating Facts About Peter Jackson’s Fab Four Documentary, “Get Back”