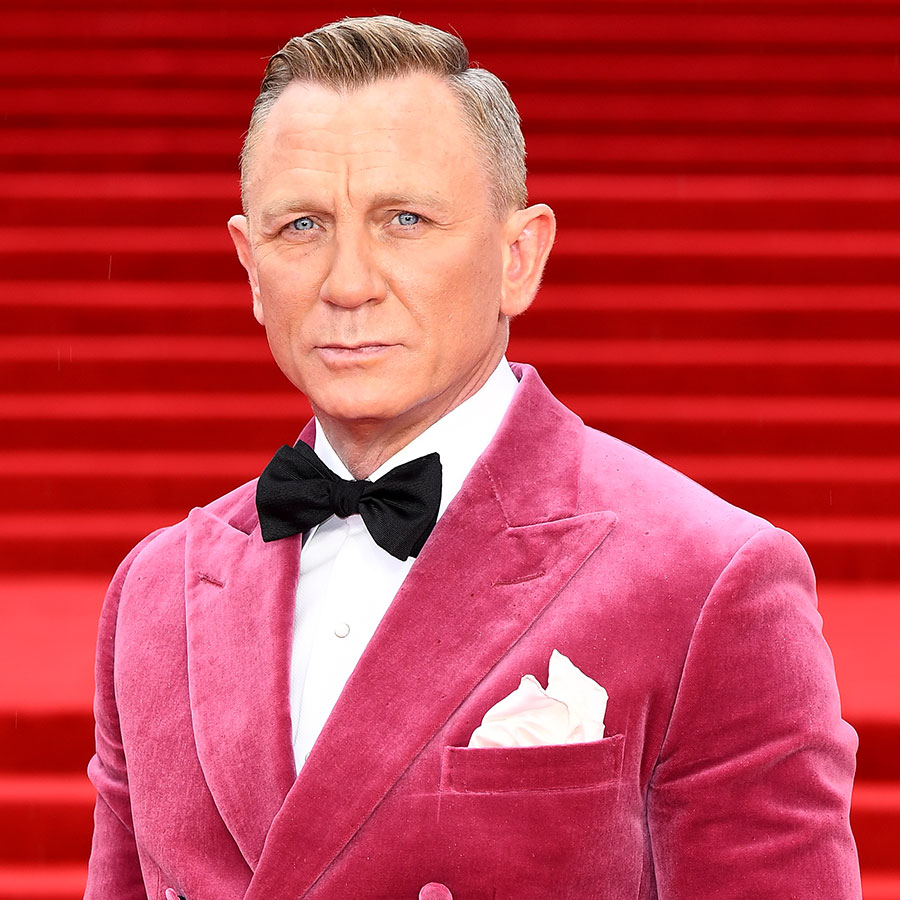 After starring in five 007 movies over the last 15 years, actor Daniel Craig, 53, has held the role of James Bond — Ian Fleming’s globe-trotting British intelligence agent — for longer than any of his predecessors (Sean Connery, Roger Moore, David Niven, George Lazenby, Roger Moore, Timothy Dalton, and Pierce Brosnan). And now, with No Time to Die (in Canadian theatres October 8) filmmaker Cary Joji Fukunaga — the Emmy-winning director of the HBO crime series True Detective — brings the curtain down on Craig’s super spy.

Three times delayed due to the COVID-19 pandemic, a star-studded world premiere at the Royal Albert Hall in London last week (attended by both Prince Charles and Duchess Camilla and Prince William and Duchess Catherine) finally sent him off, with both current cast and past franchise favourites like Dame Judi Dench, 86, and Michelle Yeoh, 59, in attendance.

To mark the occasion of Daniel Craig’s 007 swan song, we look at the actor’s tenure as James Bond and how he helped to evolve the franchise over his 15-year run.

As GQ’s April 2020 cover story — published ahead of No Time to Die‘s originally scheduled release — contends, Craig “managed to turn the campy secret agent into a three-dimensional character.”

Yet when the actor was announced as the 007 successor to Pierce Brosnan, both fans and the British press initially decried the idea of ‘a blond Bond.’ His 2006 Bond debut in Casino Royale — a movie that also functions as the character’s origin story — changed everybody’s mind.

For all the fast cars, exploding briefcases, and cool gadgetry, what truly set Craig apart was the raw physicality he brought to the role. Take Casino Royale’s exhilarating opener — a parkour chase through a dusty Madagascar construction site that offered a grittier than usual style of action sequence to rival the breathless Bourne series that was nipping at the Bond franchise’s heels. Likewise, there’s the vertiginous opening scene in Spectre (2015) — a thrilling chase through Mexico City’s teeming Dia de los Muertos parade.

Clad in closely tailored Tom Ford suits, Craig’s Bond is a bruiser seemingly plucked out of a Guy Ritchie movie. It’s a fact that’s evident from the opening moments of Casino Royale (in which Craig’s Bond recalls his first kill) and through the unforgiving brutality of the hand-to-hand combat scenes in Craig’s four subsequent Bond movies.

While Craig’s physical style makes him the most bloodied and bruised Bond, he’s also something of a contradiction: a vulnerable thug in elegant evening clothes. His Bond is an introspective, damaged individual, often grim, haunted by the sadness and guilt over the death of Vesper Lynd, the lover who betrayed him, throughout his character arc. Craig’s nimble but cerebral Bond is less a Lothario assassin (though he rivals the imposing physicality and charisma of Connery) and has more brooding sensitivity than, say, Roger Moore (who chose to emphasize the character’s more dashing qualities).

Craig told Playboy in 2008 that he “wanted to play around with the flaws in his character. It was much more interesting than having him be perfect and polished and so suave as to be flawless.” Following this lead steadily increased the movies in scale and gravitas — and running time.

“Maybe I’ll be remembered as the Grumpy Bond,” the actor laughingly told the New York Times more recently, on the eve of his final premiere.

Previously, the James Bond franchise consisted of self-contained movies in which 007 saves the world again and again — with all the trappings so perfectly lampooned by Mike Myers in his Austin Powers franchise. Craig’s tenure as Bond, however, eschewed that standalone format and built a connected storyline across five movies.

That episodic approach — fundamentally making each new instalment a sequel — enables this final outing to be a sort of culmination of a journey. If Casino Royale laid out the damaged individual Bond was, then in Quantum of Solace he’s on the run from himself; Skyfall gives in and fleshes out Bond’s past trauma with personal history and an emotional payoff. Spectre then takes a (preposterous) cue from the Marvel Cinematic Universe and suggests that everything is connected, before No Time to Die goes full-on melodrama. And while the Craig era has its detractors, there’s no denying it changed how we view the James Bond character and his personal arc moving forward.

Both Personal and Picturesque

“I think it is by far the most personal story, alongside On Her Majesty’s Secret Service and Casino Royale,” co-producer Barbara Broccoli says in the press notes about No Time to Die.

The premise of the film is old-school: longtime CIA pal Felix Leiter (Jeffrey Wright) coaxes Bond out of retirement for a heist to derail a nefarious Spectre plot. As such, Craig’s fifth and final outing is a portrait of a man weighed down by his past and offered second chances — including with lover Madeleine Swann (Léa Seydoux). The kaleidoscopic opening titles are mesmerizing and reference genome sequences, decaying ancient relics, and the passage of time as grains of sand through an hourglass offer foreshadowing.

Meanwhile, despite Bond’s personal heaviness, the audience is regaled with the usual assortment of cosmopolitan travelogue action set pieces, like motorbike stunts in a Italian medieval hill town and a sweeping journey to the Faroe Islands, where villain Safin (Rami Malek) is working on a microscopic genetic bioweapon. In between the stark Scandinavian vistas and a lair of brutalist architecture that nods to the work of Tadao Ando, there’s even a glimpse into the office culture of MI6 and Q (Ben Whishaw) at home in his Victorian cottage.

You Only Live Once

At one point in No Time to Die, a character recites this Jack London passage: “The proper function of man is to live, not to exist. I shall not waste my days in trying to prolong them. I shall use my time.”

Like London did with his own adventures, Craig made his time as Bond count. “I watched every single Bond movie three or four times, taking in everything I could about how the character had been portrayed in the past,” Craig told Entertainment Weekly back in 2006, “then threw all that away once I started doing the role.”

Up until Bond (and even during his tenure) Craig’s career leaned toward the theatre, indie movies and art house fare playing people, not archetypes, grounded in reality. It’s no surprise, then, that his serious acting chops made his Bond portrayal the first to earn a BAFTA nomination (for Casino Royale) and, overall, delivered a 007 reckoning with morality, mortality and, later, his own obsolescence.

“We could see he was reluctant to do it, because he knew it would change his life, which it obviously has,” Broccoli recalled in a BBC Radio 4 interview ahead of the film’s release. “It’s changed his life, but it hasn’t changed him.”

Where It All Started

The franchise is nothing if not self-referential, continuously looping back to Bond lore. As a result, both the character and this movie return to where it all began — Jamaica, where Dr. No. kicked off the franchise in 1962 (Zoomer visited Bond creator Ian Fleming’s Jamaican villa, now a private resort, ahead of No Time to Die‘s release).

In No Time to Die, Bond’s been out of active duty for five years and living in waterfront tranquility — or is it boredom? James Bond is a man who doesn’t know who he is when he’s not working. As rival MI6 agent Nomi (Lashana Lynch) suggests: he has “too much time to kill and nothing to live for.”

This is where we also witness Craig’s most effortless and effervescent on-screen chemistry since his pairing with Eva Green as Vesper Lynd in Casino Royale. In No Time to Die it’s with Paloma, played by Cuban actress Ana de Armas — who also starred alongside Craig in the 2019 hit Knives Out. She has a memorable but all-too-brief role as an ally agent helping with the Cuban extraction operation and their playful banter and seamless tag-team action reminds us that Bond used to be fun. Here’s hoping she’ll be a recurring character going forward.

In the novels and movies 007 is a World War II veteran who served in the British Navy with the title of Commander Bond; ahead of his final movie release last month Craig was similarly given his counterpart’s honorary rank: Commander Craig.

In a new promotional retrospective Being James Bond (streaming on Crave and Global) with EON producers Michael G. Wilson and Barbara Broccoli, Craig is candid about the highs and lows of his Bond experience (including the many injuries sustained over the course of his run, doing stunts). The 45-minute documentary features their wide-ranging conversation illustrated by plentiful behind-the-scenes footage from the first four movies.

While EON producers insist they won’t even begin the search for the new James Bond until next year, bookmaker William Hill’s odds are still on Tom Hardy as the favourite to succeed Craig.

In the meantime, Craig will be co-starring with Ruth Negga in Macbeth on Broadway next spring and, according to Variety, the actor will be paid US$100 million to reprise his role as detective Benoit Blanc in the two upcoming Knives Out sequels.

But just as Casino Royale acted as a hard reset to what came before, you can count on the next instalment — and the as-yet-unnamed new star — feeling more like a reboot than a replacement.