Paul Simon Turns 80: The Fascinating Stories Behind 8 of His Most Famous Songs 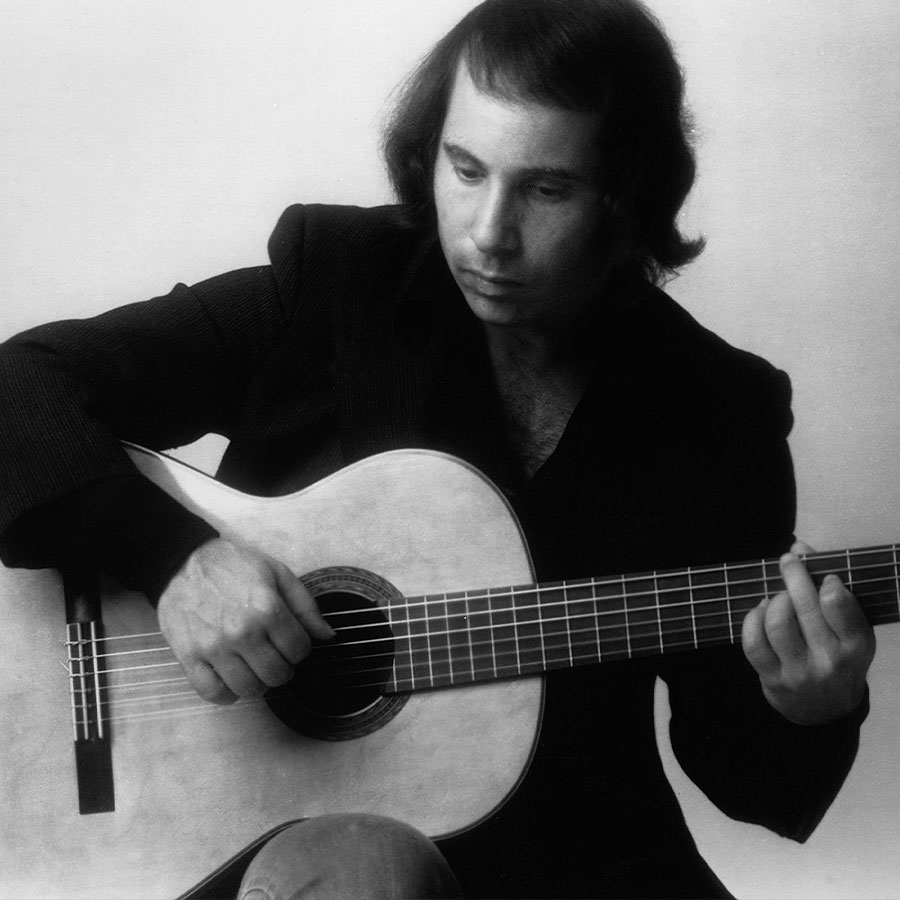 “It would be easy for me to stand up here for the next few minutes and talk about Paul Simon’s consummate skill as a songwriter and musician, but this seems to be neither the time nor place.”

So quipped comedian Steve Martin during the 2002 Kennedy Center Honors, kicking off one of the funniest tribute speeches ever delivered at the venue (you can watch it below).

Martin, of course, honoured his pal, Paul Simon, that night, praising his career as one that “has survived cultural changes and (has) been reborn each time with a new burst of creativity.”

Simon is, without doubt, one of the greatest and most influential songwriters of all time — a troubadour whose lyrical depths, timeless melodies and musical storytelling abilities rank him in a class with the likes of Lennon/McCartney, Bob Dylan, Joni Mitchell, Smokey Robinson and Leonard Cohen.

And on Oct. 13, the boy from Queens, New York — who met and began performing with pal Art Garfunkel while still in grade school before forging a near-60 year career in music, both as a member of Simon and Garfunkel and as a solo artist — turns 80.

When it comes to his craft, Simon once explained to American Songwriter that his process for penning a tune requires him to let his mind wander and then see what “words and phrases” it produces organically.

“Because as soon as your mind knows that it’s on, and it’s supposed to produce some lines, either it doesn’t or it produces things that are very predictable,” he explained. “I’m interested in discovering where my mind wants to go or what object it wants to pick up … And as a lyricist, my job is to find out what it is that I’m thinking. Even if it’s something that I don’t want to be thinking.”

That process, in part, helped produce classics like “Mrs. Robinson,” “Bridge Over Troubled Water,” “The Sound of Silence,” “50 Ways to Leave Your Lover” and so many more.

In honour of Simon’s 80th birthday, we revisit the fascinating stories behind eight of his greatest hits.

1. The Sound of Silence — From Flop to Fame

The sound of silence is exactly what this classic folk tune elicited when it was originally released on the 1964 Simon and Garfunkel debut album Wednesday Morning, 3 A.M. In fact, the song — and album — made such little impact that Simon and Garfunkel simply broke up (for the first time) and went their separate ways.

A year later, the album’s producer, Tom Wilson, heard that the song was getting radio airplay among college kids and decided to remix the tune with some electric guitars, bass and a drum. He didn’t tell Paul Simon or Art Garfunkel his plan — and Garfunkel reportedly didn’t like the remix, which was an attempt to replicate the sound that brought the Byrds success on tunes like “Mr. Tambourine Man” — but the song shot to the top of the charts. It all came as a shock to Paul Simon, who’d moved to England, and Art Garfunkel, who’d returned to his studies at Columbia University. But suddenly, out of nowhere, Simon and Garfunkel were a chart-topping act.

If The Graduate director Mike Nichols hadn’t asked Simon and Garfunkel for another tune to help fill out the soundtrack to his 1967 film (which also featured “The Sound of Silence” among other Simon-penned songs) we may never have been treated to the classic that is “Mrs. Robinson.” Or, at least, not in its current form.

The song was originally titled “Mrs. Roosevelt,” after former U.S. First Lady Eleanor Roosevelt. But, as Variety noted, “As the film neared completion, there was still something lacking in its music. Nichols leaped at the chance to use a scrap of an insinuating little tune Simon had written about Eleanor Roosevelt. And so former First Lady ‘Mrs. Roosevelt’ became drunken adulteress ‘Mrs. Robinson,’ and The Graduate acquired its key musical theme.”

As for the other famous name uttered in the song — that of New York Yankees great Joe DiMaggio — Simon once explained that his actual favourite Yankee was Mickey Mantle but the number of syllables in his name didn’t work with the melody. And so, “our nation” turns its lonely eyes to Joltin’ Joe instead.

The tune also became the first rock and roll song to win the Record of the Year Grammy (1969).

3. The Boxer — Finding Inspiration in The Bible

Paul Simon has noted that his hit song about the poor boxer who squandered his resistance for a pocketful of mumbles (such are promises) was somewhat autobiographical.

“I think the song was about me: everybody’s beating me up, and I’m telling you now I’m going to go away if you don’t stop,” he told Playboy in 1984. “By that time we had encountered our first criticism. For the first few years, it was just pure praise. It took two or three years for people to realize that we weren’t strange creatures that emerged from England but just two guys from Queens who used to sing rock ‘n’ roll. And maybe we weren’t real folkies at all! Maybe we weren’t even hippies!”

Simon also revealed that some of the lyrics from the tune were inspired by a Bible he read while on a plane.

“I had taken a Bible from one of the hotels. And I was skimming the Bible,” he explained. “That’s where I think phrases such as ‘workman’s wages’ came from, and ‘seeking out the poorer quarters. That was biblical.”

Along with “The Sound of Silence” and “Mrs. Robinson,” the song “Bridge Over Troubled Water” remains one of Paul Simon’s most popular and enduring tunes.

In fact, it nabbed five Grammys in 1971 — not bad for a song that Simon once said, “came so fast, and when it was done, I said, ‘Where did that come from? It doesn’t seem like me.’”

The song is so timeless that famed songwriter, musician and producer Allen Toussaint reportedly declared, “That song had two writers: Paul Simon and God.”

And while the tune may have been the result of divine intervention — Simon has neither confirmed nor denied this theory — at least one lyric boasts very simple “roots.”

The final verse contains the famous line, “Sail on silvergirl,” which Simon later confirmed was a reference to his then-wife, Peggy Harper, after she’d found grey hairs on her head for the first time.

In the Kennedy Center video above, Steve Martin jokes that Paul Simon called him one night to tell him about a new song that he’d written, “47 Ways to Leave Your Lover,” and that the comedian helped him top it off at 50.

In reality, Simon himself noted in a 1975 book called Rock Lives: Profiles and Interviews that, “I woke up one morning in my apartment on Central Park and the opening words just popped into my mind: ‘The problem is all inside your head, she said to me…’ That was the first thing I thought of. So I just started building on that line.”

He added that “It’s basically a nonsense song,” with lines like “You just slip out the back, Jack/Make a new plan, Stan/You don’t need to be coy, Roy…”

Funnily enough, in the same book Simon’s brother Eddie offered an alternative origin story for the tune — one that involves a children’s rhyming game.

“Paul loves to play these little improvisational rhyming games with his three-year-old son, Harper James … I think that’s where the song came from. I believe it grew out of those games they play. I know it’s Harper James’s favourite.”

Paul Simon famously named this hit 1972 song after the name of a dish at a Chinese food restaurant.

As he told Rolling Stone, “I was eating in a Chinese restaurant downtown. There was a dish called ‘Mother and Child Reunion.’ It’s chicken and eggs. And I said, ‘Oh, I love that title. I gotta use that one.’”

He went on to explain that another element if the song came from the death of his pet dog, which was struck by a car.

“We loved this dog. It was the first death I had ever experienced personally. Nobody in my family died that I felt that,” he said. “But I felt this loss — one minute there, next minute gone, and then my first thought was, ‘Oh, man, what if that was Peggy [his wife]? What if somebody like that died? Death, what is it? I can’t get it.’ And there were lyrics straight out forward like that.’”

“You Can Call Me Al” is one of Paul Simon’s most famous songs, but it also contains some of his most obscure, nonsensical lyrics: “If you’ll be my bodyguard, I can be your long lost pal/I can call you Betty/And Betty, when you call me, you can call me Al.”

Why does the man in the song want to be called Al? And why is he calling us Betty? According to the book Paul Simon: A Life, by famed music writer Robert Hilburn, the names stem from a party Simon and his then-wife Peggy held one night at their New York home. One of the guests, New York Philharmonic Director Pierre Boulez, met the couple for the first time that evening. At the end of the party, the book explains, “Paul said goodbye to Boulez at the door, and he responded ‘Thank you, Al, and please give my best to Betty.’ The couple went around for months calling each other Betty and Al.”

The music video adds to the fun, featuring the pairing of Paul Simon with comedian Chevy Chase, who lip syncs the song as the actual singer pretends to play various instruments next to him.

8. Me and Julio Down By the Schoolyard — What Exactly Did Mama Pajama See?

“Me and Julio Down By the Schoolyard” is another fun Paul Simon tune, kicking off with the lyric: “The mama pajama rolled out of bed/And she ran to the police station/When the papa found out he, began to shout/And he started the investigation.”

But it begs the question: what exactly did mama pajama see that sent her running to the police? In 1972, Rolling Stone put the question to Simon and, as it turns out, he’s not sure either.

“I have no idea what it is. Something sexual is what I imagine, but when I say ‘something,’ I never bothered to figure out what it was. Didn’t make any difference to me. I like the line about the radical priest — I think that’s funny to have in a song.”

“Me And Julio Down By The Schoolyard” is also one of two Paul Simon songs to be banned by the BBC for violating their policy for not mentioning product brand names. In the song, Simon sings, “We was all on the cover of Newsweek.”

The other Simon song to be nixed by the BBC for the same reason? “Kodachrome.”

At least, in the end, Simon finally got to pair up with his hero, Mickey Mantle, for the music video.

Paul Anka Turns 80: The Life and Legacy of the Famed Canadian Crooner, In His Own Words