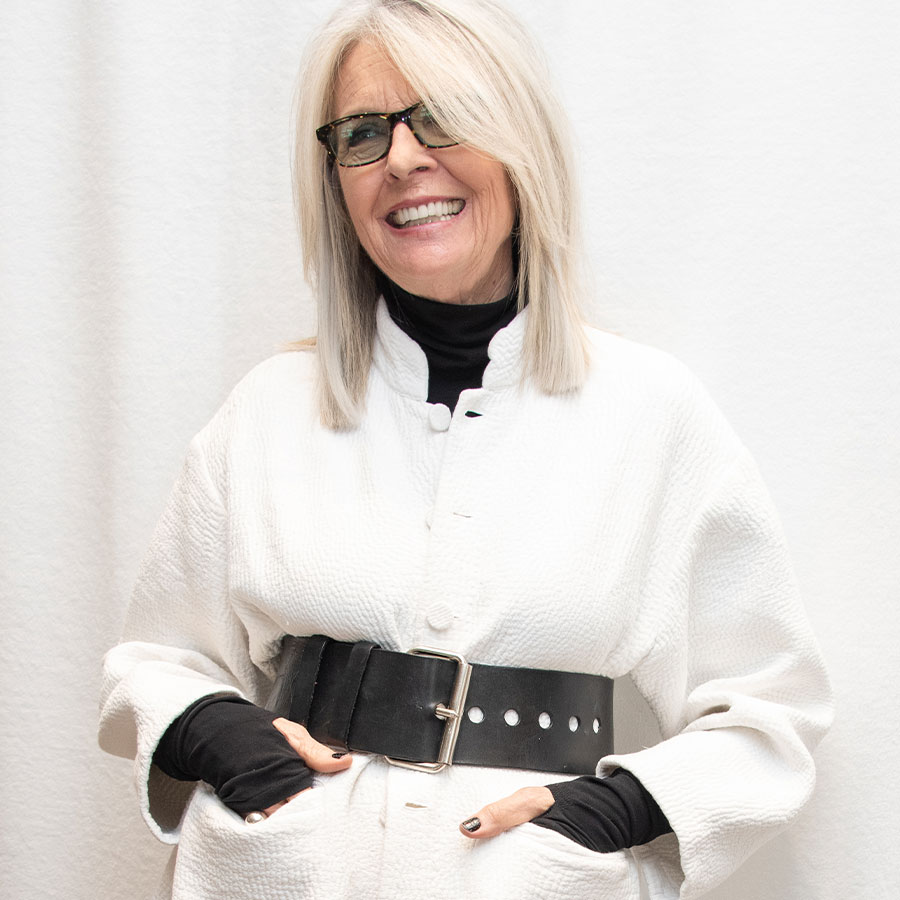 When Diane Keaton, 75, was tapped to play Justin Bieber’s grandmother in a new music video for his hit song “Ghost,” the Hollywood icon didn’t hesitate in accepting — nor did she need any help with her wardrobe for the shoot.

The Oscar-winning actress simply dressed the way she always does: with an abundance of style.

“The outfits were indicative of my style because they’re mine,” Keaton told  Vogue of the shoot. “Some of the outfits are from my closet. I had some wonderful things from Gucci.”

Keaton joined a host of younger stars, from Harry Styles to Dakota Johnson, in the fashion brand’s latest campaign earlier this year, while her personal style retains the unique layered menswear look that she pioneered, beginning with the 1977 film Annie Hall.

Coming from the generation that birthed the belittling “OK Boomer” retort, it would have been easy for Bieber, 27, to succumb to out-dated stereotypes and plunk Keaton’s grandmother character down in a rocking chair as a prop while he sang and danced circles around her. But instead, Bieber and his team took a more modern approach to the grandmother-grandson relationship.

The heartwarming video sees the Canadian pop star grow closer to his grandmother in the wake of his grandfather’s death, with the pair taking long walks along California’s Ventura Pier Beach, updating her dating profile and going out for a night of cocktails and dancing.  In the latter scene, Keaton sports her signature look — a Comme des Garçons coat with an extra-wide belt paired with a dramatic black chapeau — all from her own closet.

In another scene, the pair cruise along the coast in a Corvette with Keaton wearing one of her favourite garments — an elegant checked Gucci coat.

“That coat is really killer for me. It’s my favourite,” Keaton explained to Vogue. “A coat is the greatest thing in the world for a person like me, who’s kind of odd. Let’s face it: I’m willing to accept the fact that I’m a little odd.”

In the same interview Keaton said that Bieber handpicked her for the role, calling her personally with the offer. “I said, ‘yeah, sure.’ I thought the song was wonderful.

“He’s totally charming,” she says, elaborating on her experience working with Bieber. “He had to have his arm around me when we were walking into the ocean … If I felt like hugging him, I’d hug him. He was stuck with me.”

The generational pairing between Keaton and Bieber is an intriguing one. By the time Justin Bieber was born in 1994, Keaton had already appeared in all eight of her Woody Allen films as well as the entire Godfather trilogy.

Still, Keaton’s enthusiastic splash into music video grandmother-hood is no surprise. The actress, who’s amassed a healthy Instagram following of nearly two million fans (and was once dubbed the unofficial Best Dressed Woman on Instagram), has always embraced aging as an evolutionary process.

“To  me, beauty is about change,” Keaton said in a 2012 Zoomer cover story. “How are you going to experience everything if you don’t change? If you’re constantly going, ‘How can I stay still?’ then you’re stuck. It’s fun to play with your face. It’s fun to think about what you’re going to wear. But you can’t go back. Nor do I want to because what would I be going back to?”

Throughout the latter part of her career, Keaton has helped carve out a space for women over 50 in the youth-obsessed entertainment industry, particularly in the romance genre with films like Baby Boom and Something’s Gotta Give while in her 50s and The Best Exotic Marigold Hotel in her 60s.

“The ladies enjoyed that movie because they were included in a romance, and why shouldn’t we be?” Keaton said of her role in Something’s Gotta Give in the same Zoomer interview.

While Keaton’s turn as a designer-clad grandma taking shots of hard liquor with her pop star grandson won’t dismantle ageist mentalities on its own, it’s certainly a step in the right direction .

Meanwhile, for Keaton, the collaboration gave her the gift of a new experience, a new friend and perhaps, another notch in her continuing evolution.

“This was just sheer fun,”Keaton told Vogue. “All my life, I’ve been an actress and had lines, and sometimes I’ve gotten to loosen them up a little — but this was just completely loose and relaxed. Nobody ever [told me to do] anything, which made it so much fun.”