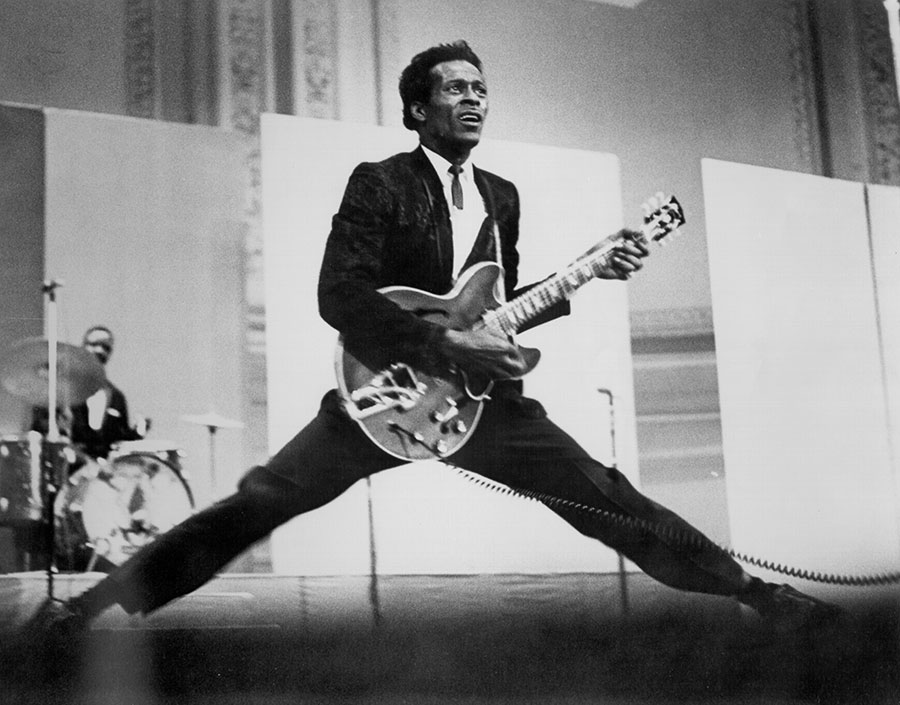 Rock and roll legend Chuck Berry does the splits as he plays his Gibson hollowbody electric guitar, circa 1968. Photo: Michael Ochs Archives/Getty Images

Chuck Berry breathed new life into the American music scene during the 1950s. With hits like “Johnny B. Goode” and “Roll Over Beethoven,” many consider him to be the founding father of rock ‘n’ roll. And while he’ll always be remembered for his innovative sound and showmanship, his music was also a reflection of his life.

1. Berry’s childhood was characterized by racial segregation. He’d never seen a white person until the age of three, when the fire department responded to a call in the black community where he was raised. ”I thought they were so frightened that their faces were whitened from fear of going near the big fire,” Berry told the New York Times. ”Daddy told me they were white people, and their skin was always white that way, day or night.”

2. The moment that started it all came in 1941 when Berry first performed “Confessin’ the Blues” in front of his entire high school. The song choice (considered crude by 1940’s standards) offended the adults in the room and, of course, elated the students.

And it was this performance, and watching his friend play the guitar, that sparked something within Berry. ”It was then that my determination to play guitar and accompany myself while singing became an amendment to my religion,” he told the New York Times.

3. Berry wore many different hats. Before he made it big on the music scene. He worked at his father’s construction company, at an auto plant and as a freelance photographer. He also followed in his sister’s footsteps and graduated with a degree in hairdressing and cosmetology.

At least we now have an explanation for that signature perm.

4. Although Berry grew up during an era rife with discrimination and racial segregation, he intentionally blended music from both sides of the racial divide. “Curiosity provoked me to lay a lot of our country stuff on our predominantly black audience,” he wrote in his self-titled autobiography. “After they laughed at me a few times, they began requesting the hillbilly stuff and enjoyed dancing to it.” 5. Unlike most artists, Berry penned his autobiography without the help of a ghost writer. It’s simplistic title, Chuck Berry: The Autobiography, certainly isn’t indicative of the content. It turns out he was a master of words—with and without his guitar. Here’s one of his more memorable passages:

“Try as I did, day after day, to cling to righteousness, I was washed down in suds of sinful surroundings.”

6. Berry’s first major hit, “Maybellene,” is also considered the first true rock ‘n roll song. It features a rhythm and blues beat, country guitar licks, and a Chicago blues flavour. Married with narrative storytelling, the song was unlike anything else on the radio at the time.

“Maybellene” earned Berry his first record deal and climbed to No. 1 on the R&B charts.

7. Despite an impressive catalogue of cleverly written songs, “My Dingaling,” was Berry’s only No. 1 hit single. And while there’s a handful of other songs his fans would deem more worthy of the top spot, Berry always stood by his naughty sing-a-long, claiming he was simply giving the audience what they wanted.

“There’s certain songs and thoughts, for that matter, that almost make tears come to their eyes,” he told Rolling Stone. “I’d give it to them if that’s what they wanted.”

8. The hit “Johnny B. Goode” was autobiographical in nature — with the exception of a few narrative liberties. The original words, he explained to Rolling Stone, were “that little coloured boy could play.” But “I changed it to ‘country boy’—or else it wouldn’t get on the radio.”

While the lyric about Johnny never learning to “read or write so well” isn’t true of Berry, the overall theme of finding fame unexpectedly rings true. Berry was employed as a beautician in St. Louis when he was discovered by Chess Records’ biggest star, Muddy Waters.

9. In 1977, NASA launched Voyager 1 and Voyager 2 into space, with each carrying a 12-inch gold plated record containing (among other earthly noises and images) music from a variety of cultures and genres. Included on the record is Berry’s “Johnny B. Goode.”

NASA said the golden record is “intended to communicate a story of our world to extraterrestrials.” And what better way to introduce rock ‘n roll to our alien neighbours than through the electric sounds of the originator himself?

Fanny: Pioneering 1970s Female Rock Band Finally Gets Their Due in New Doc “Fanny: The Right to Rock”