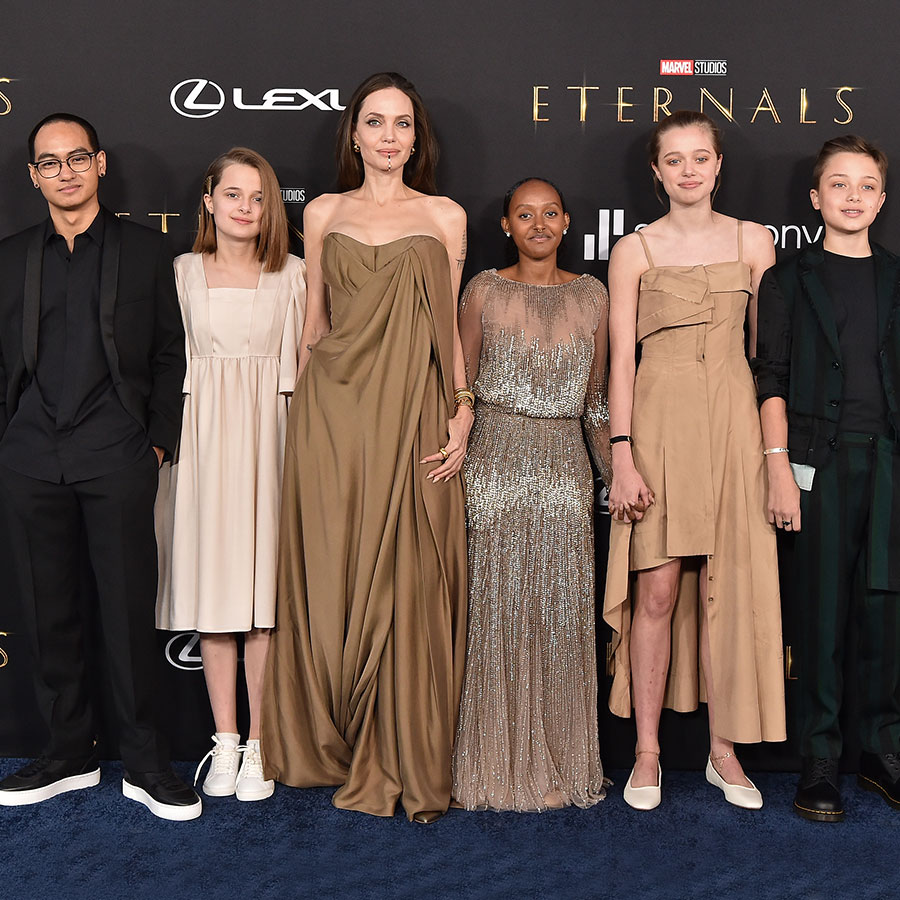 Angelina Jolie outfitted her children in sustainable fashion from her own closet for the premiere of her new Marvel film 'Eternals' on Monday. Perhaps the luckiest of the bunch was Zahara Jolie-Pitt (on Jolie's immediate left), who wore her mother's 2014 Oscars dress. Photo: Axelle / Bauer-Griffin / FilmMagic via Getty Images

The rebranding of parental hand-me-downs as party wear wouldn’t likely fly with your average teenager. But, when you’re Angelina Jolie’s daughter, an environmentally-friendly hand-me-down doesn’t sound like such a bad idea.

Jolie, 46, attended the premiere of her new Marvel film Eternals with five of her children on Monday and took a deep dive into her closet for her brood’s red carpet looks — most notably, outfitting her 16-year-old daughter Zahara Jolie-Pitt in the silver Elie Saab couture gown she donned at the 2014 Oscars.

“My kids are all mixed with vintage, and in my old Oscars dress,” Jolie told Entertainment Tonight in a red carpet interview. “We did all vintage and upcycled my old stuff.”

Upcycling involves the repurposing of existing clothing to create something new and translates to less material heading to landfills.

While hand-me-downs are hardly new for thrifty parents, the practice making its way to Hollywood is an encouraging sign that the sustainability movement is rubbing off on even the most rich and famous.

Prince William’s inaugural Earthshot Prize award ceremony — which recognizes environmental initiatives around the world —  provided another high-profile moment for sustainable fashion last weekend with the prince, 39, and Kate, Duchess of Cambridge, 39, leading the way on the green carpet. For the event, Kate journeyed deep into her royal walk-in closet and revived a lilac Alexander McQueen gown she wore at a BAFTA event in Los Angeles 10 years prior, while Prince William donned a green velvet blazer by Reiss he had worn pre-pandemic at a charity gala.

Celebrity invitees, who were warned not to “go out and buy something new for this” before the event, also obliged with upcycled and recycled looks, including Emma Thompson’s suit, which the 62-year-old actress originally wore when she was awarded the title of Dame Commander of the Order of the British Empire in 2018.

Emma Watson, 31, also sported a sustainable look at the event, wearing a dress that was upcycled from a selection of 10 bridal gowns sourced from Oxfam, the British charity shop. The actor, who Vogue dubbed “Hollywood’s queen of ethical dressing,” is known for embracing green fashion, both in her daily outfits and in her business dealings — including her role as chair of Gucci’s parent company Kering’s sustainability committee.

Meanwhile on the other end of the generational spectrum is Jane Fonda, 83, the Godmother of celebrity environmental activism. The Academy Award-winning screen legend, who helped launch Gucci’s sustainable fashion line, Off the Grid, promised way back in 2019 that her iconic red coat — in which she was arrested in multiple times during “Fire Drill Fridays” climate change protests on Capitol Hill — would be “the last piece of clothing I’ll ever buy.”

Staying true to her word, the coat made a more glamorous appearance at the 92nd Academy Awards in 2020, along with a ruby red, beaded Elie Saab gown she originally wore to the 2014 Cannes Film Festival.

As for the famous coat making the transition to hand-me-down, she may have to go the upcycle route by the time she’s through with it.

“There was a woman who was very cold and I loaned her my coat,” Fonda said in an interview with The Washington Post shortly after she was released following her Nov 2020 arrest. “But I did have to take it back: it was my mattress.”

Paris Fashion Week: 9 of Our Favourite Looks From the Capital of Chic