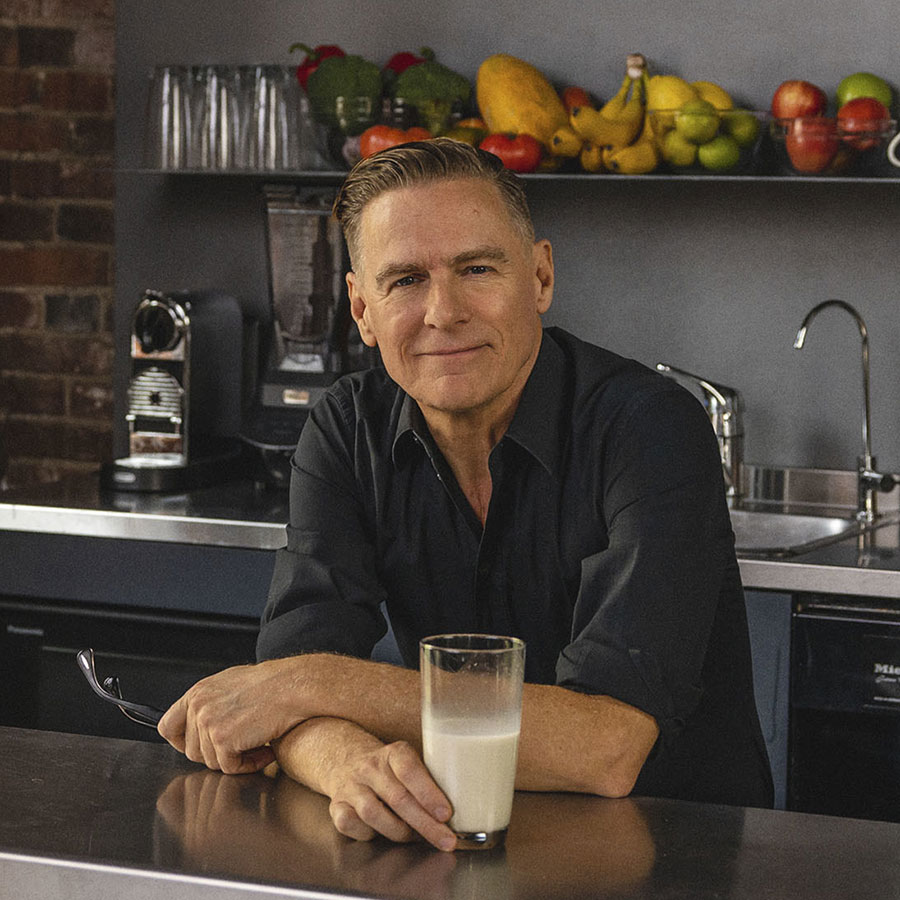 Canadian rock star — and proud vegan — Bryan Adams says that choosing plant-based dairy alternatives "is something that we can all do to help lessen animal cruelty and help our environment." Photo: Courtesy PRNewsFoto / bettermoo(d)

After spending decades as a vegan himself, Canadian rocker Bryan Adams, 61, is now encouraging dairy lovers to take the dietary leap.

The two-time Zoomer cover star has teamed up with bettermoo(d), a startup from his hometown of Vancouver that has developed a gluten, lactose and dairy-free, plant-based milk alternative.

“Fostering responsible eating habits, such as choosing plant-based dairy alternatives, is something that we can all do to help lessen animal cruelty and help our environment,” Adams said in a statement. “I’m excited to be invited to be a founding member of bettermoo(d) for those reasons.”

The company’s first product, Moodrink, a plant-based milk alternative, is made from local organic oats and a proprietary blend of herbs while promising a flavour and texture reminiscent of dairy.

“Being plant-based isn’t just a trend — it’s about making better choices,” Nima Bahrami, CEO of bettermoo(d), said in a statement. “By creating great-tasting alternative dairy products, made from sustainably-sourced quality ingredients, we will make it easier for consumers to make these better choices.”

In addition to their milk alternative, the company plans on expanding into other dairy replacements, including butter, yogurt, cheese and créme fraiche, all of which are made with their signature blend of herbs.

Adams, who went vegan three decades ago, says at first he wasn’t sure if the plant-based diet would meet his nutritional needs.

“When I first stopped eating animal products, everyone thought it was a phase,” Adams said in an Instagram post from early 2020. “That was 30 years ago. And in the beginning, I wasn’t sure I’d get everything I needed from plants. I’d been brainwashed like most of society to believe that we needed to eat animals. But we simply don’t. If you’re going to try it, you have to give it [a] chance. Detoxing animal products out of your system takes patience and commitment, but you’ll thank yourself once you get there.”

When asked what prompted his decision to go vegan in a 2018 interview with Vegan First, Adams said it was about taking control of his health.

“Trusting doctors with my health just wasn’t working for me,” he said. “I managed to change things for myself within months by simply changing my diet,  I saw what were chronic health problems disappear by eliminating animal products from what I was eating. I’ve never looked back.”

If the health kick wasn’t enough, Adams is convinced the diet has done wonders for his appearance as he ages. The rock star, who still boasts the same physique as he did in the 1980s, not to mention a healthy head of blonde hair, has said he owes both to his early adoption of veganism.

“I’d love to see a comparison photo of me if I hadn’t taken this path. My guess is I’d be a lot heavier and perhaps I’d have gone grey,” he told the Mirror in a 2019 interview. “Oddly at 60, neither have happened, and I can only attribute that to what I’ve been ingesting.”

A scroll through Adams’ recent Instagram posts reveals a more lighthearted approach to sharing the vegan message. In one, he posted a photo of a green t-shirt that reads “Eat What Elephants Eat,” while in another, he snapped a photo of a chalk board sign with a drawing of a cow’s udder on it and the line, “If you had to suck them yourself, you’d drink almond milk.”

“Makes ya think no? Breast feeding from cows is just weird,” Adams added in the caption.

Still, Adams’ commitment to animal welfare and environmental activism doesn’t stop with the food on his plate.

In 2018, while on vacation at his island home in St. Vincent and the Grenadines, he thwarted a whalers attempt to corral a whale within a 1,000 metre ocean conservation area using only a paddle board  .

And in the midst of the pandemic last year, Adams busied himself picking up trash from the ocean.

Meanwhile, if there was ever any doubts about the appropriateness of a plant-based diet for those 60 and up, Adams is certainly the proof in the plant-based, non-dairy pudding.

With his new single “So Happy it Hurts” out now, a Las Vegas residency lined up for November, his recent work shooting A-listers like Cher and Jennifer Hudson for the 2022 Pirelli calendar and the release of his new album, So Happy it Hurts, coming in March 2022 — along with a European tour — the Canadian rocker isn’t running out of juice anytime soon.

“I don’t sit and think about how I’m going to make myself rock in my old age,” Adams told Zoomer in a 2014 cover story. “I’m grateful and I love singing and I’m going to carry on doing it as long as people like it and as long as I’m loving it, too.”