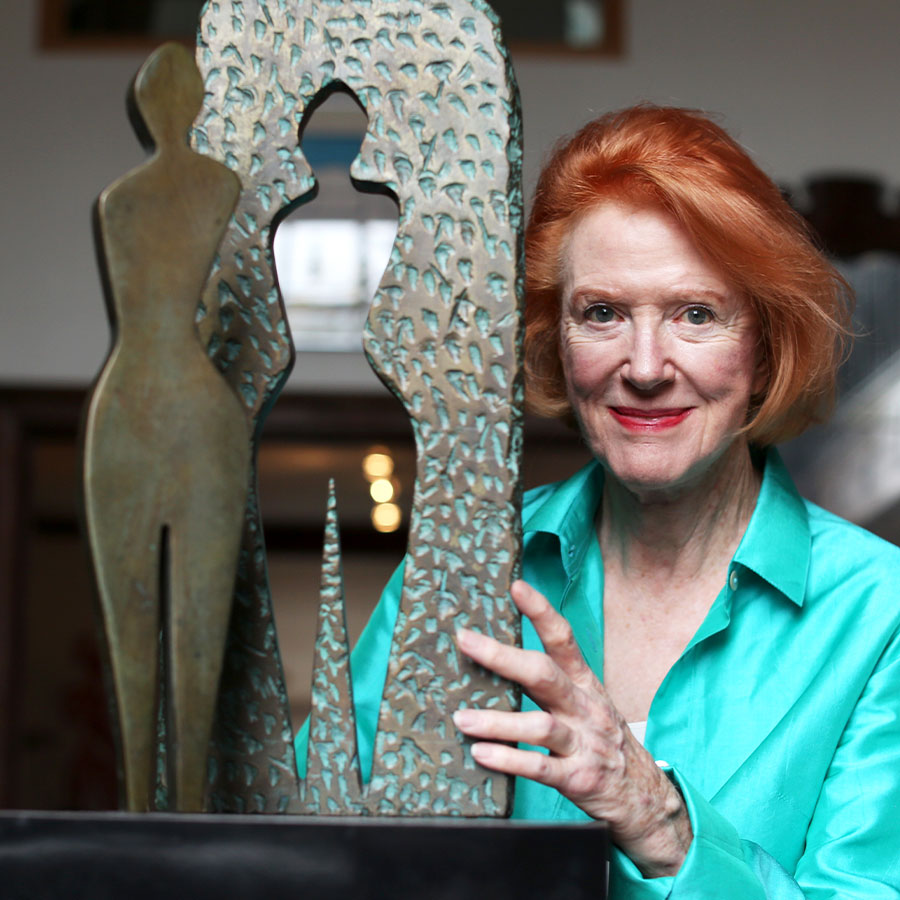 Edwina Sandys, pictured above with one of her sculptures, says that her and her grandfather, Winston Churchill, enjoyed a commonality in their art: "His whole life was colourful and he loved colour. So he didn't shy away and do just little pale pastels. He went right to it with gusto. And I love colour, too." Photo: Hadar Pitchon

“I would say that if I could only have one colour in the world, it would have to be red.”

Artist Edwina Sandys, 82, makes the declaration over the phone during a recent call from her home in New York.

When I ask why she’d choose red, Sandys declares, “I’m just drawn to red. Red is the brightest colour in the world. And if you’re going to have a colour, why not go the whole hog?”

Perhaps this choice isn’t a surprise. To start, she’s got a shock of red hair upon her head. Plus, that straightforward spirit of going “whole hog” — not to mention her way with words — seems to run in the family, given her grandfather is Winston Churchill.

And while Churchill is best remembered as one of the great statesmen of the 20th century, he and his granddaughter share another commonality — their love of art.

Sandys remembers observing her grandfather paint as a child, describing the experience to America’s National Churchill Museum as “watching as he put magic on the canvas.”

But like with Churchill, art wasn’t Sandys’ first vocation. She started her career as a newspaper columnist, and then turned to writing fiction before turning to art in the ’70s — launching a career spent creating sculptures and paintings that frequently addressed social justice issues, democracy and women’s rights.

One of Sandys’ most famous works — a sculpture named The Pillars of Justice — stands in the McMurtry Gardens of Justice in downtown Toronto, appropriately just a short walk from sculptor Oscar Nemon’s statue of Winston Churchill.

Described by the McMurtry Gardens as a “Greek temple façade (front and back) with a classical triangular pediment supported by two rows of pillars in the shape of men and women who are the jury,” the work features 11 figures — leaving the 12th space for visitors to step into and become part of the work itself.

The Pillars of Justice is one of Sandys’ best-known works in a career that includes commissions from around the world, including for the United Nations. Another of her other most famous sculptures, the Christa — a lifesize bronze sculpture of a female Christ on a cross — caused controversy when it was unveiled in 1974. Today, it hangs in New York’s Cathedral of St. John the Divine. Meanwhile, her 1990 sculpture, Breakthrough, featuring figures carved from pieces of the Berlin Wall, was donated to Missouri’s Westminster College, the site of Churchill’s “Iron Curtain” speech in 1946.

And now, a retrospective of Sandys’ work — Edwina Sandys: Woman Free — is being staged at Toronto’s Iona Studio through Oct. 30.

James Burn, the man who brought the exhibit to Toronto, told Zoomer that he did so because, “I am so impressed with her body of work. The way she challenges the status quo and invites really important questions about life, culture and about each one of us … Edwina’s work explores flip sides, the here and there, the material and void, masculine and feminine.”

Sandys spoke with Zoomer about her art, growing up with Winston Churchill and how we can all embrace our own inner artist in everyday life.

MIKE CRISOLAGO: When you see pieces from various stages of your career all in one place, as you do in Edwina Sandys: Woman Free, does it offer a renewed perspective on your own work?

EDWINA SANDYS: Well, some of the pieces remind me that there’s still a bit of an unfinished melody about them and that there could be follow ups on them. The one that reminds me that there’s still some things to be done in my work is The Pillars of Justice, which is one of the most satisfactory things that I’ve done. … But I do have, in the show, the model for The Pillars of Justice but also a design for a sister or brother sculpture, which would be the reverse. Instead of having the pillars shaped like human beings holding up the top of the temple, it’s going to be two flat walls and inside of them are cut out and void of figures of people.

MC: How has your approach to your artwork, or your creative process, evolved throughout the years?

MC: Speaking of men, you’ve noted that, as a child, you’d watch your grandfather, Winston Churchill, paint. What qualities did you admire about him as an artist and did you incorporate any of them into your own work?

ES: When he did become an artist, it was mostly he got colour and he got a paint box and he started using it. So, I think one of the things that we have in common is that — but I don’t think especially on purpose — my grandfather had a wonderful way with colour. His whole life was colourful and he loved colour. So he didn’t shy away and do just little pale pastels. He went right to it with gusto. And I love colour too.

MC: Absolutely. And when it comes to your grandfather, what memories of him stand out to you?

ES: Well, the times that we were children and young people, we would see him in the home. Although we did go to watch him in Parliament sometimes, that sort of thing. But basically it was weekends in the country, in Chartwell. And he might be painting in the garden and we would see him doing that. And then we would all go swimming in the pool. There was a round pool. And then we would go for walks by the lake. It’s [home to] black swans that he’d been given by the prime minister or the president of Australia. He would like to feed them, but they weren’t easy. But anyway, he was very attached to them and we loved animals. So we usually went off to lunch with whoever was there. We’d go out for a walk. And he loved his gardens — he loved everything, pretty well, everything that was good to love. Because he was an all-around man — a man for all seasons.

MC: He certainly was.

ES: And what was lovely, I saw him in the family life. I did see all the other stuff. But we would have Christmas and Easter events, we would be all around a big table — a very long table with family and some friends. And he would often like to recite poetry. He didn’t have to read it because he knew it by heart. … And he would also occasionally want to burst into song, but we didn’t have too much music on that side of the family. He wasn’t a good singer or anything. Otherwise, I’m sure he’d be singing opera. But he wasn’t. But he did so many other things.

MC: Yes, he definitely had enough on his plate already. And as for yourself, when it comes to the Edwina Sandys: Woman Free exhibition, what do you hope people take away from it?

ES: Well, I hope that everybody will find something in the show that they can relate to. And maybe people who have never thought they would do art — I never thought I’d be an artist — and maybe, like my grandfather and myself, they will jump in and say, ‘Why don’t I do something?’ It might be a little sketch — well get the pen and paper. Or maybe when they’re making bread, they can put the dough into a shape and think ‘That’s rather good, maybe I’ll get some clay.’ I think people don’t realize that each one of us is an artist and our canvas is our life. So whatever you do in the day, it’s as if you’ve made a little bit of the drawing on the page. And you may make a good work of art of your life, or you may just not do much. So every day you’re putting a little extra on.

Edwina Sandys: Woman Free is on at the Iona Studio through Oct. 30. Click here for more information.