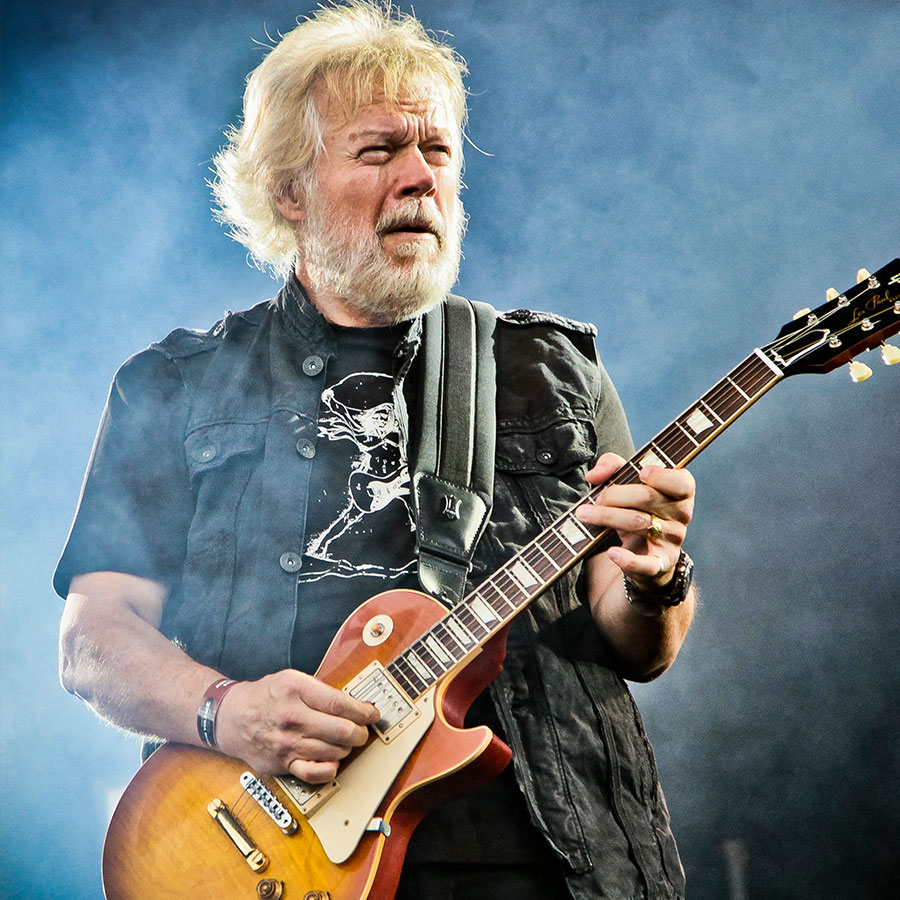 Randy Bachman, 78, is crossing generational lines with his latest projects, which include both a career retrospective box set and a new album written and recorded with his son, Tal. Photo: Christie Goodwin

No sooner does Randy Bachman appear on the Zoom screen from his Vancouver home than the Canadian rock legend holds up a western orange 1957 Gretsch 6120 Chet Atkins guitar.

“I’m thrilled! Here it is,” the 78-year-old exclaims, beaming like he did, presumably, as a boy in Winnipeg, when he first set eyes on the instrument in the front window of a local music store.

Bachman, as the story famously goes, bought his own western orange 1957 Gretsch 6120 Chet Atkins guitar as a young up-and-comer and wrote some of rock music’s most famous tunes — “American Woman,” “Takin’ Care of Business,” etc. — on it before it was stolen from his hotel room while on tour in Toronto in 1976. Forty-five years of searching proved fruitless until recently, when a fan recognized Bachman’s axe in a music video by Japanese singer Takeshi. Somehow, the guitar had crossed continents and, after making an arrangement with Takeshi to get his original guitar back, Bachman bought the one he brandishes on Zoom to give Takeshi in return (they’ll make the trade when travel restrictions ease and Bachman can visit Japan to facilitate it).

“A guitar is the most intimate instrument,” Bachman explains. “You hold it next to your heart, both arms are around it. It’s the most incredible instrument. And to steal it is the cruelest thing in the world. Like you’re looking out the window and a guy runs over your dog and waves at you. You know what I mean? Terrible.”

His guitar, however, isn’t the only thing Bachman keeps next to his heart. Reaching into his collared shirt, he pulls out a gold piece hanging from a string around his neck. He explains that he got it in America in 1968 and “after that, I wrote, with Burton, “These Eyes,” “Laughing,” “Undun,” “No Sugar.” I wrote everything after that.”

Bachman adds that he only found the gold piece a few weeks ago and began wearing it — including during a concert this past September that he played with former writing partner and Guess Who bandmate Burton Cummings. “We totally rocked onstage. So I believe in these things. There’s certain omens of vibe that they give you.”

What Goes Around, Comes Around

That connection between past and present, old and new, is a major theme in Bachman’s life at the moment. To start, there’s the release, on Oct. 29, of Bachman Cummings: The Collection — a multi-disc or LP box set that collects the best of both Bachman and Cummings, from their days with The Guess Who, Bachman’s tenure with Bachman-Turner Overdrive and Cummings’ solo work. The set comes with a book packed with liner notes, never-before-seen photos of the rockers in their younger days, shots of concert lineups and recording notes, and much more.

“It’s an amazing documented history of what came out of Winnipeg in the ’60s,” Bachman says. “And if you add to that, my buddy Neil Young and what he did at the same time. I mean, Winnipeg was literally the capital of music in Canada.”

Bachman happily recalls the famous stories behind some of his most well-known tunes — how a few random riffs he played while tuning his guitar live on stage during a show sounded great, prompting he and Cummings and the band to improvise the song that became “American Woman.” Or how, during a car ride, Bachman heard famed Vancouver radio DJ Daryl Burlingham use the phrase “taking care of business,” which he thought would make a fantastic song title.

“And I write it down on my song-writers kit, which I have in my car. You might in yours too. It’s a McDonald’s napkin and a smashed crayon from your kids,” Bachman laughs. “Because if you don’t write down the idea you forget about it. It’s gone. You got to write down your dreams.”

Bachman’s musical dreams — as evidenced by the box set and, of course, the more than 40 million records he’s sold globally and numerous chart-topping hits and rock standards he penned or co-wrote — have largely come to fruition. As a solo artist or member of The Guess Who, BTO or any of his other bands, Bachman stands as one of Canada’s most successful musical exports. For example, consider this astounding stat: on the back of hits like “American Woman,” “Share the Land,” “Laughing,” “Undun,” and others, The Guess Who, by 1970, were not only huge international successes, but had outsold the entire Canadian music industry.

And decades later, when Bachman and Cummings reunite for shows like the one they did in September, and upcoming gigs in 2022 in support of the box set, Bachman says the pair haven’t skipped a beat. “He’s my bicycle and I’m his bicycle. And isn’t it just like riding a bike?

“It’s staggering, the music we wrote together and then alone, as solo,” he adds. “And then as I did with BTO, and then now I’m doing with my son Tal. I was in three different schools of music — The Guess Who school, BTO school and now I’m in the Bachman/Bachman school.”

Bachman: The Next Generation

In closing that full circle of the past coming back around to the present, Bachman — as he anticipates the release of the career retrospective box set and ensuing concerts — is also working on a new album with his son, songwriter and musician Tal Bachman, 53.

The pair, known as Bachman & Bachman, took time while locked down together in Vancouver during the pandemic to create “an album that’s retrospective of what’s happened to me in my life, or what’s happened to him, which is heartache, heartbreak, falling in love, falling out of love, getting a guitar, losing a guitar.”

The as-yet-untitled album took Bachman, purposely out of his comfort zone — much like his previous jazz albums, or his 2018 blues disc Heavy Blues.

“I sent it to a friend of mine in Nashville and he said, ‘You’re missing the classic Randy Bachman guitar solos.’ And I said, ‘Thank you very much.’ I didn’t want to play those. This is new.”

Bachman says he takes musical chances — like with this, an Americana-infused album — rather than resting on his laurels because, well, the latter is “really, really boring.” Instead, with the new disc, “I had to reinvent myself as a thinker, as a songwriter.”

Part of that process included staying up late at night streaming crime dramas from Finland and Denmark and Sweden. He’d watch the English subtitles and then “write down these things” that he saw. In addition, he’d have words or phrases that others may have said throughout the day swirling around in his subconscious.

“And then it comes to me in my sleep,” he says, noting that, sometimes, he’d wake up at three in the morning and start working on a song. “So you asked what I’ve learned, I’ve learned to accept whoever is sending me the song ideas and write them down.”

Not unlike the time he scribbled “taking care of business” in crayon on a napkin in his car — another full-circle moment to add to the big three: the impending return of his beloved guitar, the new box set and his upcoming Bachman & Bachman album.

“I’m in the middle of all three of those,” Bachman laughs. “Whatever happened — this triplicate, this triad of amazing worldwide events that’s happening through no magic of mine.”