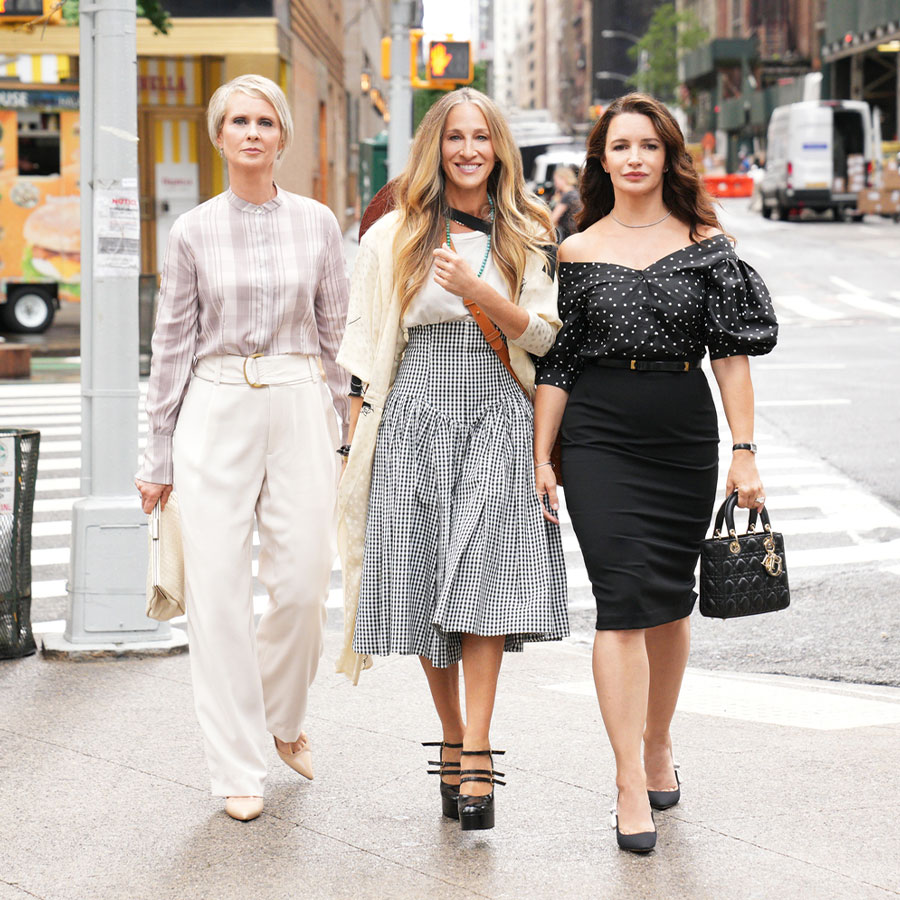 While the majority of reaction to 'And Just Like That...' has been positive, Sarah Jessica Parker — pictured above with co-stars Cynthia Nixon (left) and Kristin Davis (right) in a shot from the series — told 'Vogue' that she’s dealt with an onslaught of ageist criticism as well. Photo: Courtesy of HBO Max

In an interview with Vogue, Parker — who reprises her role as freelance writer turned podcaster Carrie Bradshaw in the new series — clapped back, quite literally, at online commenters ascribing to an age-old double standard that faults women for greying hair while praising men for embracing the same age-related changes.

“There’s so much misogynist chatter in response to us that would never. Happen. About. A. Man,” Parker, 56, told Vogue, stressing each word with a clap.

“He has a full head of grey hair, and he’s exquisite. Why is it okay for him?” she added, referencing longtime friend and Bravo host Andy Cohen. “I don’t know what to tell you people! Especially on social media. Everyone has something to say. ‘She has too many wrinkles, she doesn’t have enough wrinkles.’ It almost feels as if people don’t want us to be perfectly okay with where we are, as if they almost enjoy us being pained by who we are today, whether we choose to age naturally and not look perfect, or whether you do something if that makes you feel better. I know what I look like. I have no choice. What am I going to do about it? Stop aging? Disappear?”

In the revival series, fans catch up with Carrie, Charlotte York Goldenblatt (Kristin Davis, 56) and Miranda Hobbes (Cynthia Nixon, 55) as they once again navigate love, friendship and, of course, sex as women in their 50s in New York City.

Particularly irksome for Davis is when people question the need for the show’s return.

“People are like, ‘Why should they come back?’ and it really bugs me. Are women’s lives not interesting now? Nobody ever asks, ‘Why would you do this violent remake over and over again?’” she tells Vogue.  “For me that is so indicative of our reluctance to sit and watch women’s lives develop over time.”

The original Sex and the City aired from 1998 to 2004, followed by two movie adaptations in 2008 and 2010. Canadian actress Kim Cattrall, 65, who played Samantha Jones in the original series and the two films, declined to return for the revival.

Michael Patrick King, the producer and writer for the original show and film adaptations, who has returned as show-runner for the revival, says he noticed the ageist barbs online as well.

“When we announced And Just Like That…, there were a lot of positive reactions, but one bitchy response online was people sharing pictures of the Golden Girls. And I was like, ‘Wow, so it’s either you’re 35, or you’re retired and living in Florida. There’s a missing chapter here,’” King told Vogue.

“I like that we’re not trying to youthify the show. We’re not including, like, a 21-year-old niece,” Nixon adds in the same story.

Meanwhile, the passage of time for the show’s trio isn’t just superficial.  Although the cast has been tight-lipped about the revival’s plot, before shooting began Parker told Vanity Fair that she was excited about the modern approach to each of the characters, including their handling of the pandemic.

“I think that Cynthia, Kristin, and I are all excited about the time that has passed. You know, who are they in this world now? Have they adapted? What part have they played? Where have they fallen short as women, as friends, and how are they finding their way? Did they move with momentum? Are they like some people who are confused, threatened, nervous?” she said. “I’m so curious and excited to see how the writers imagine these women today.”

As for those who are bothered by the natural aging process making its way onto the small screen in the series, they’d likely benefit from the wise words of Carrie Bradshaw herself:

“Maybe the past is like an anchor holding us back. Maybe you have to let go of who you were to become who you will be.”

Meanwhile, when the revival was first announced and again after Parker’s Vogue interview, fans took to social media to defend the SATC cast and their positive representation of ageing.

Older and Bolder: Ahead of the “Sex and the City” Reboot, We Look at 15 Ways to Stay Stylish in Your 50s, 60s and Beyond

What’s a “Sex and the City” Reboot Without Kim Cattrall’s Samantha Jones?

Candace Bushnell on Dating, #MeToo and Her New Book “Is There Still Sex in the City?“