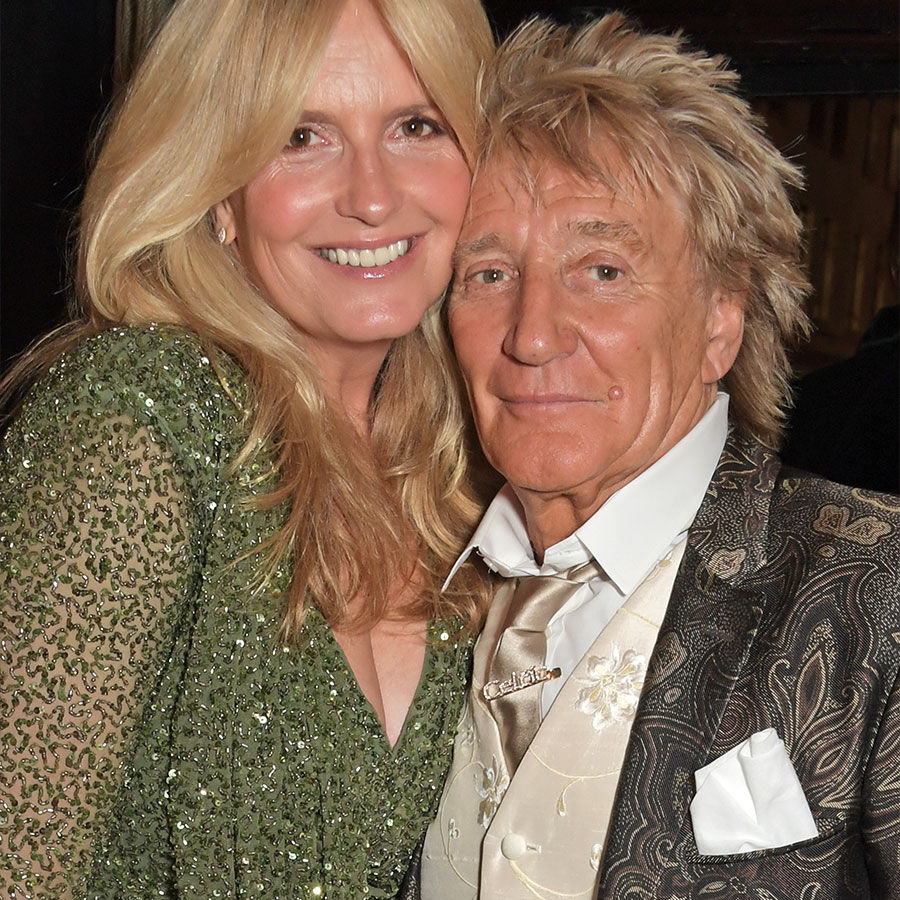 Rod Stewart, 76, and wife Penny Lancaster, 50 — seen here in October — made an appearance on a British talk show recently during which the rocker discussed his ignorance about menopause. Photo: David M. Benett/Dave Benett/Getty Images for Langan's

For context, Stewart appeared with his wife, Penny Lancaster, 50, on the British daytime chat show Loose Women on Tuesday and professed to be dumbstruck by the menopausal symptoms she was experiencing. “It was frightening because she really wasn’t the person I married.” Yes, her change was all about him.

Lancaster is a regular guest on the no-holds-barred talk show and has been open about her struggle with menopause with the gossipy panel, sharing that, during lockdown, she began experiencing classic symptoms. “I’ve been having the really hot sweats, then freezing cold … my body temperature is fluctuating all over the place. It affects your mood swings, I’ve been putting on more weight.”

Stewart, meanwhile, claims he was gobsmacked.

The comment was in reference to previous story Lancaster had shared on the show, where she’d admitted, “I was in the kitchen, cooking dinner, it had been one of those days where everything had been going wrong and I’d had enough. I ended up throwing the dinner across the kitchen.”

But still, after years of dating much younger women, is this the first time one of Stewart’s partners has reached menopause while he’s been with them?

Stewart has eight children — ranging in age from 10 to 59 — with five women, including Lancaster. However, the bevy of beautiful partners to whom he’s been attached over the years — including his other baby mamas Alana Stewart, Kelly Emberg and Rachel Hunter, not to mention his ex with whom he did not procreate, actress and singer Britt Ekland — exited his life before this stage of the aging process occurred. (His first daughter, Sarah, born to his childhood sweetheart Susannah Boffey when they were 18, was given up for adoption at birth, reuniting with the then-rock star when she herself was 18.)

Stewart, who famously worked as a gravedigger on his road to stardom, was ostensibly making an appearance on the show to promote his new album, Tears of Hercules, which he released — he admitted somewhat to his regret — on the same day Adele’s blockbuster 30 dropped. The panel, however, was more interested in his ignorance about menopause.

He went on to say about Lancaster’s symptoms, “We talked through it and I think that’s what couples have to do. Men have got to get on with it, understand and come out the other end.” Still, when asked if he had shared his newfound wisdom with his male friends, he answered, “No … Because we talk about football and they don’t bring that subject up.”

Now, I am writing this as a female of the species and, while I would have hoped that Rod Stewart could have been a shining example of male insight, it doesn’t surprise me. Menopause occurs on a spectrum — a different experience for everyone from about age 40, for early menopause, through perimenopause, in the 45 to 50 zone, on through to a post-menopausal phase that can last through much of a woman’s 50s.

All of those ages and stages are accompanied by denial and a lack of understanding by the people around the woman going through the gamut of slippery and ever-changing physical and emotional symptoms. Penny Lancaster was doing something cool, talking about her experience on British TV, admitting she was breaking down in tears and screaming in frustration in the kitchen one day.

To have her husband — a man who really should know better by this point — reduce it to the aforementioned “fragile situation” that he was relieved to be now better (with his wife on a new round of hormone medication) is dismissive and archaic.

Rod: walking on eggshells is not helpful. It is annoying as hell. Googling is a start, and so is talking to your wife, so bonus points there. He also suggested that men take menopause classes to help understand it better.

And to be fair, Stewart’s own natural cohort of septuagenarians didn’t talk about menopause at all. He is just cresting some kind of post-modern celebrity moment where you can be publicly surprised by the aging experience of your wife, who is 26 years younger.

It is, however, time for all men, of all ages, to do more learning and listening and talking with women about all stages of life — and the hormone storms that occur as part of that. Much of the stigma and suffering of menopause in particular is in trying to pretend that the world hasn’t shifted on its ear.

Catastrophizing and clichés don’t help anyone.