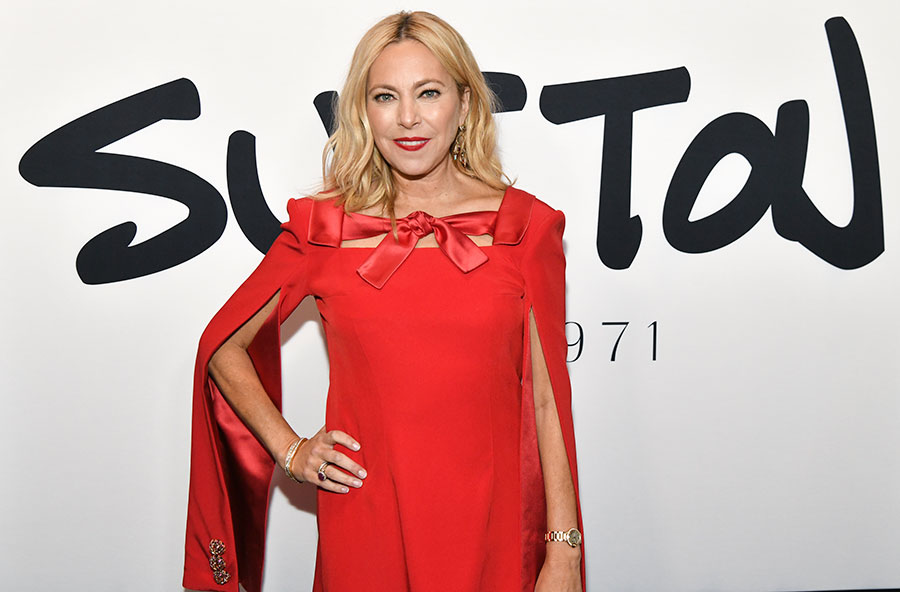 Sutton Stracke attends "A Parisian Night In LA" Sutton Collection Showcase on Nov. 10, 2021 in West Hollywood. Stracke will be in Toronto on Dec. 6 and 7 for the launch of her new cashmere line at Cabine. Photo: Rodin Eckenroth / Getty Images

Real Housewives of Beverly Hills star Sutton Stracke will be in Toronto early next week for the launch of her new cashmere line at Cabine in Yorkville. Stracke, 50, is a fashion thoroughbred — a Couture Week regular and the owner of a West Hollywood boutique — who joined the cast of the hit reality series in season 10.

Cabine is the salon of Nicholas Mellamphy, 52, the Canadian style maestro whom Vogue called “a fashion legend” and the New York Times gave a shout out to for his “daring points of view.”

The shop is also a bespoke shopping experience, meaning Mellamphy works with a roster of private clients by appointment only. But for this special Cabine x Sutton pop-up, the pink door of his exquisite, art photography-filled space on Hazelton Avenue is open to the public on December 6 and 7 to meet Stracke and pre-order her cashmere line.

Mellamphy himself first met Stracke at the Versace atelier during Couture Week a number of years ago. When he heard she was expanding her fashion footprint to include a cashmere line, he secured the launch for his Toronto salon.

The eco-friendly line — textiles from Italy, manufactured in Los Angeles — is a natural extension for Stracke, who is striking while the iron is hot.

Her profile exploded with the TV series. And fans will be aware that during the RHOBH reunion episodes last month, Sutton revealed she had to hire private security when she was threatened by scandal-plagued cast member Erika Jayne for asking pointed questions about what Jayne knew, and when, during her messy divorce from alleged air crash victim scammer Tom Girardi. New episodes air Wednesdays on Slice in Canada and all 11 seasons of RHOBH are available on the all-reality streaming service Hayu.

To Toronto, With Cashmere

Yes, drama and confrontation, alliances and rivalries are the bread and butter of the Housewives chain. So too are the trappings of its wealthy cast members, whose natural habitats include the gym, the fancy lunch, the charity benefit, spas and medspas and plastic surgeons’ waiting rooms — all with a waiter trailing behind with trays of bubbly and a driver toting designer shopping bags.

It is interesting that the Toronto version of the series didn’t take off, but not surprising. Each satellite edition, of course, reflects the vibe of the place it is filmed, from Orange County to New York, New Jersey to Salt Lake City, Miami to Dallas. There are a number of easy clichés about Torontonians — that we are polite, and reserved, and follow rules — and they are, indeed, not very Housewifey character traits. And saying sorry a lot does not good TV make.

But cashmere? Now that is a pitch Torontonians will buy into. Stracke’s treacly southern drawl on the phone makes her new line sound all the more appealing.

Born in Augusta, Ga., Stracke was a debutante who went off to New York to chase her dream of being a ballet dancer. She became development director for the Cunningham Dance Foundation and, on her marriage to real estate investor Christian Stracke (the couple divorced in 2017 and share three children), she became a socialite and began joining boards — such as the American Ballet Theatre.

None of this prepared her for a recent “trip from hell” back to Los Angeles from Augusta, where she spent Thanksgiving.

“Did you know they charge $2 for headphones in economy?” she began, as she regaled me with her brief brush with the masses. “We were stuck in Augusta for five hours, me, my two boys and my dog. We missed our first connection, and our second connection, then we were pushed onto a third, in economy. My first time in maybe 20 years in economy. I was in a middle seat, with my lab.”

Thankfully for Stracke, and the two “very nice” people on either side of her and the dog, “it turns out they do serve drinks in economy.”

The Evolution of a Tastemaker

Her Thanksgiving table, meanwhile, was already up for display on the Bravo site. Stracke knows from table laying it turns out; she was named one of the Top 100 party hosts in America (alongside Oprah and Michelle Obama), as decreed by the publication The Salonniere.

She decided to indulge her curiosity in couture on her 40th birthday. “It is a double-edged sword, because then you get hooked. What I love about going to couture is that you are not there to be seen, you are there to shop. I like the seriousness of it.”

As she began to buy custom-made pieces, she developed relationships with the designers. One unexpected friendship is with Dolce and Gabbana. At an Alta Moda presentation in Capri, she fell in love with the clothes, the designers, and their tiaras. “I wasn’t a very D&G girl, I’m not voluptuous. But when I stayed on in Capri for three weeks, I understood the clothes better, in that environment. They create clothes for that environment.”

They also sent her a tiara as a birthday present, which has since become one of her signature accessories.

“The first time I wore one, to an ABT gala, people kept coming up to me and saying ‘Congratulations! Are you getting married? Is it your birthday?’” [The tiara had the words “I Am a Princess” written on it.] “But the next time I wore a tiara, it just worked. No one said anything. After all, you have to be a little brave.”

Stracke says she dresses herself for the show, “I don’t have a stylist, but people do write on my Instagram, ‘You should fire your stylist.’”  It is okay to make fashion mistakes, she says. “I wear what I love. To express who you are is to have fun.”

Some of this letting go of criticism is necessary battle armour as a Housewife. But it also may be about her positive take on aging and the new perspectives it brings. “I just turned 50 and there is this freedom. I feel younger, and happier.”

She is still the girl who took Clorox to her jean jackets in the ’80s, and stuck brooches all over them, she says. “The ’80s was a time of experimenting with fashion: we ripped up jeans, before you could buy jeans with holes in them. I still have that spirit in me, of playing with things, and not being too perfect.”

She would never, she says, wear one designer head to toe, preferring instead to mix up high with low.

It is that playful quality that lends relatability to Stracke, no matter how many more zeros she has in her bank account (she is considered one of the richer Housewives in the Beverly Hills chapter, though apparently she resolutely refuses to talk about money. “I’m a Southern girl,” she will demur, according to reports; I didn’t ask, because I’m far too Canadian).

The most impactful thing about the Housewives franchise is the very idea of it: these are middle-aged women all playing starring roles. It is a fantasy, wrapped in good skin care and couture, of women triumphantly getting their moment in the spotlight. It makes sense for Stracke to parlay the TV cameras peering into her life into the next steps for her fashion ambitions.

The pandemic messed up supply chains for the new Sutton line, as they have for manufacturers and retailers the world over. The prototypes will arrive just in time for the Cabine launch; photography hasn’t yet been done. Everything else — from colours to silhouettes to prices — will be revealed first here in Toronto. She is eager to get on with this long-planned rollout. “I kept my staff through lockdowns, which were long in LA. We moved the store online at that point. Nothing was shipping; I was buying whatever I could get my hands on.”

But Stracke is an optimist at heart. “It was touch and go for awhile,” she says of her fledgling fashion business. “But if you look for the silver lining, it definitely made us stronger.”

She will need her strength for back in the lion’s den at Bravo.

But at least she will be wrapped up in the softest of Italian cashmere.

From ‘Bennifer’ to Taylor and Burton, 14 Famous Couples Who Gave Love a Second Chance