Jimmy Kimmel Talks Recreating Norman Lear Classics With the Upcoming ‘Live in Front of a Studio Audience: The Facts of Life and Diff’rent Strokes’ 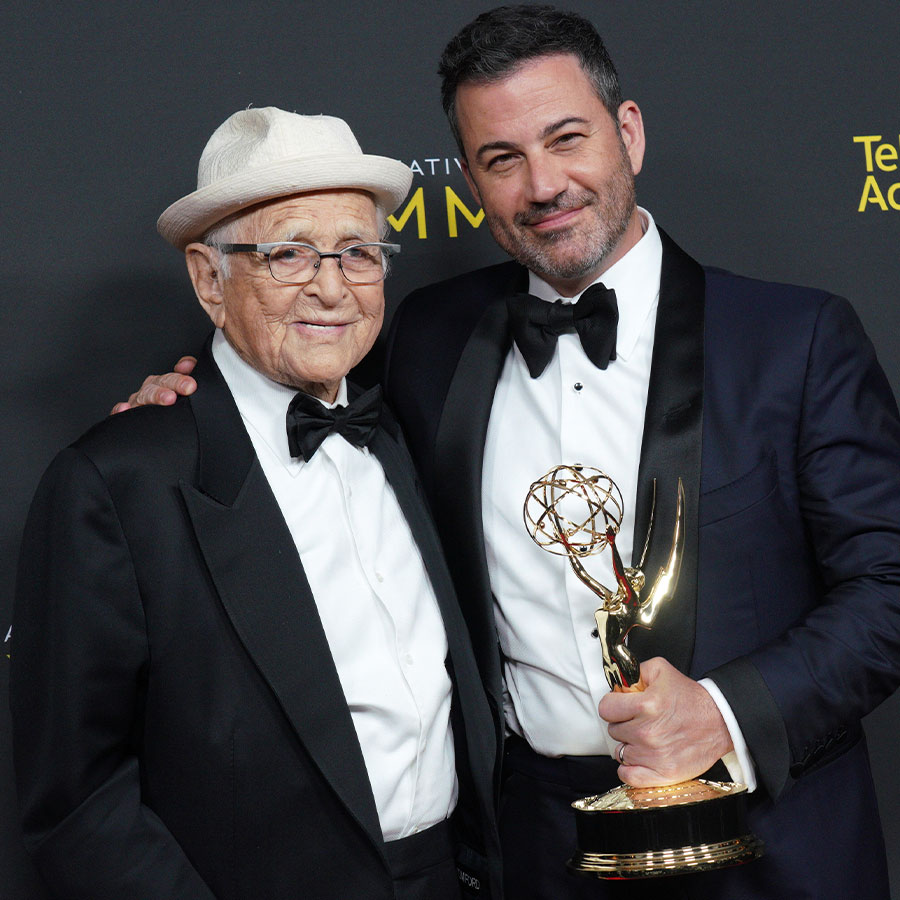 Norman Lear (L) and Jimmy Kimmel pose in the press room with the award for Outstanding Variety Special (Live) for 'Live in Front of a Studio Audience: Norman Lear's 'All in the Family' and 'The Jeffersons' during the 2019 Creative Arts Emmy Awards. Photo: Olivera / WireImage

Do not adjust your set.

On Tuesday, Dec. 7, Norman Lear and Jimmy Kimmel turn back the clock to present Live in Front of a Studio Audience: The Facts of Life and Diff’rent Strokes.

Of course, Lear, the legendary TV producer who’s still spry at 99, and Kimmel, 54, ABC’s late-night host, have teamed up before to present modern stars performing classic sitcom scripts. In 2019, they recreated two of Lear’s gems from the ‘70s — All in the Family and The Jeffersons — in the early part of the year and then again, with All in the Family and Good Times, later in the year. Both won Emmys — in 2019 and 2020 respectively — for Outstanding Variety Special, which allowed Lear, at 98 last year, to break his own record as the oldest Emmy winner in history.

This time they’ve pushed the clock ahead a decade to tackle two shows from the ‘80s.

“Those shows really were like my babysitter,” Kimmel told reporters in early December. “They had so much to do with why I love television.”

Kimmel feels not just any show can be brought back from the past; the series must be “iconic,” one where you know every character by name.

“There are friends I’ve had since I was in junior high school whose kids’ names I can’t remember,” Kimmel says. Yet he has no problem remembering the names Tootie, Jo, Blair and Natalie from The Facts of Life. “It’s just funny how important these characters are, how much brain space they take.”

With Diff’rent Strokes and The Facts of Life, the decision was made to cast adult actors to play the young juvenile leads on both series.

Diminutive comedian Kevin Hart as Arnold, “What you talkin’ ‘bout, Willis?” Drummond was the first name that popped into Kimmel’s head. Lear got it right away. The original Arnold, Gary Coleman, died at 42 in 2010.

The rest of the casting is equally top tier. Jennifer Aniston, Kathryn Hahn, Gabrielle Union and Allison Tolman are playing Blair, Jo, Tootie and Natalie from The Facts of Life, with Ann Dowd as Mrs. Garrett. John Lithgow and Damon Wayans are Mr. Drummond and Willis from Diff’rent Strokes. Jon Stewart will also be a special guest — and there will be more, Kimmel promises.

Past episodes have seen original stars pop into scenes as other characters, such as John Amos, the original James Evans Sr. in Good Times, returning as Fred Davis, while Marla Gibbs reprised her role as maid Florence Johnston on The Jeffersons. Lear and Kimmel refused to say who comes back this time, wanting to hold back a few surprises for the audience.

Kimmel did suspect that the original Facts of Life cast members are “flattered by the calibre of talent that we got to play these roles that they created.”

Past specials have attracted Oscar winners and nominees such as Woody Harrelson (as Archie Bunker) and Marisa Tomei (as Edith Bunker) in All in the Family and Jamie Foxx (as George Jefferson) and Wanda Sykes (Louise Jefferson) in The Jeffersons. Viola Davis (as Florida Evans) and Andre Braugher (as James Evans Sr.) co-starred in Good Times.

So why do so many big stars want to take part in these live specials? It’s not for the money, says Kimmel, who admits the pay is way below what these stars would normally get.

“Everyone is doing it because of their respect for Norman,” he adds, “and their admiration for what he’s done and how important he is to the history of television and as a human being as well, because he is something else.”

Another reason is simply the nostalgic kick Kimmel and others get from standing on these lovingly-recreated TV sets.

Walking out on them is “the most magical thing,” Kimmel notes. “For the most part, that’s the only original character in this production … it’s such artistry, and so amazing to see what they do in such a short period of time.”

There has not been a “Live” recreation special for two years, partially due to scheduling conflicts with the actors involved but, mostly, thanks to the first few waves of the COVID pandemic. As Kimmel points out, “in order to do Live in Front of a Studio Audience, you have to have a studio audience and so I think that was probably our biggest obstacle.”

Unknown at press time was who would sing the two theme songs live on the special. This has been a highlight of the previous three recreation specials, with Jennifer Hudson especially memorable in 2019 as she ripped through her version of The Jeffersons’ stirring, “Movin’ on Up.”

The late, great Canadian Alan Thicke co-wrote the themes to both shows being performed Dec. 7. It may be natural to assume his son, singer Robin Thicke, could perform at least one of them but, given the recent accusations of sexual assault by model Emily Ratajkowski against him from their time working on his “Blurred Lines” music video in 2013, that seems unlikely.

Another suggestion: Janet Jackson, who was part of the original Diff’rent Strokes cast as a teenager.

Kimmel would not show his hand on the subject, although he already had Martin Short come out on the last special and belt out his version of The Facts of Life theme — even though that series wasn’t even showcased on that occasion.

“And let’s not forget,” adds Kimmel, “that Martin Short is a great Canadian as well.”

Live in Front of a Studio Audience: The Facts of Life and Diff’rent Strokes airs on Dec. 7 at 8p.m. ET on ABC.

The Story of Late Night: New CNN Series Delves Into the Evolution of the Genre, From ‘The Tonight Show’ to Today