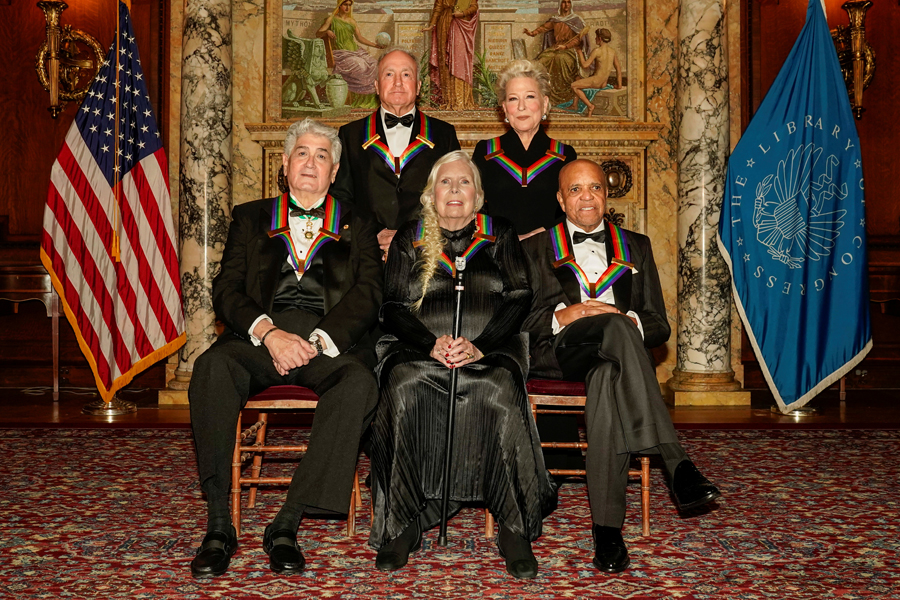 Singer Justino Díaz and Motown founder Berry Gordy rounded out the group of artists selected by the Kennedy Center for top honours this year at a show that had been upended by politics and the restrictions of the COVID-19 pandemic.

“To all of the Kennedy Center honorees past and present, thank you for sharing your gift with the nation and … with the world,” Biden, 79, said at a black-tie reception at the White House.

Trump did not hold such a reception during his four years in office and did not attend the show at the Kennedy Center.

The arts community largely did not object to that absence. Singer and actress Cher, an honoree in 2018 and an outspoken Trump critic, said she would have had to accept the award in a bathroom if Trump had come.

“It is quite nice, very nice, to see the presidential box once again being occupied,” comedian David Letterman, 74, said at the beginning of the show. The crowd rose in a standing ovation.

The awards recognize a lifetime of achievement in the performing arts. The show did not take place in 2020 because of the pandemic. Instead, last year’s honorees were celebrated in a scaled-down event earlier this year.

Audience members on Sunday had to provide proof of vaccination against COVID-19.

Bette Midler, 76, a singer and actress, has received Grammy, Emmy, Tony and Golden Globe awards for a career spanning decades, with over 30 million albums sold around the world. Actresses Goldie Hawn, Scarlett Johansson and Barbara Hershey paid tribute to her at the event. “Nothing stops Bette,” Hawn, 76, said.

Midler dished to reporters about the reception on her way into the Kennedy Center. “It was divine at the White House,” she said. “Very clean. Lovely. Great staff. Food was excellent. Wine was a little sweet.”

Canadian singer-songwriter Joni Mitchell, 78, a Canadian known for songs such as “Both Sides, Now” and “Big Yellow Taxi,” is a multi-Grammy recipient and an inductee into the Rock & Roll Hall of Fame. The show opened with performances of her songs “The Circle Game” and “A Case of You” by Norah Jones and a soaring rendition of “River” by Brandi Carlile.

Lorne Michaels, 77, also a native of Canada, is the creator and executive producer of the long-running NBC sketch comedy show Saturday Night Live.

Biden noted SNL had used seven comics to play him over the years.

“If you can’t laugh at yourself, we’re in real trouble, and you make me laugh at myself a lot,” Biden said during his remarks at the White House, referring to Michaels. Current and former SNL cast members lauded and roasted the producer during the show and singer Paul Simon, 80, sang “America.”

Justino Diaz, 81, a bass-baritone opera singer from Puerto Rico, was celebrated with performances from Carmen and Faust.

“It’s like coming home again,” Diaz told reporters as he entered the Kennedy Center. “Except a different part of the house: I’ll be in a very easy chair and I don’t have to sing.”

Berry Gordy, 92, a songwriter and record producer from Detroit, founded the Motown record label that became synonymous with a jazz- and blues-influenced musical sound popularized by Black artists including Diana Ross, Stevie Wonder, Marvin Gaye and Lionel Richie, whose careers he helped shape.

Wonder, 71, sang and played from the Kennedy Center stage, including “You are the Sunshine of My Life” and “Superstition.” Smokey Robinson, 81, also sang and paid tribute to his friend.

“I think I’m in a dream … and it’s a wonderful dream,” Gordy told reporters.

The Kennedy Center Honors will be broadcast on CBS television network on Dec. 22.

As Saturday Night Live Turns 45, Watch the Original Cast Members Discuss the Show In a 1975 Interview