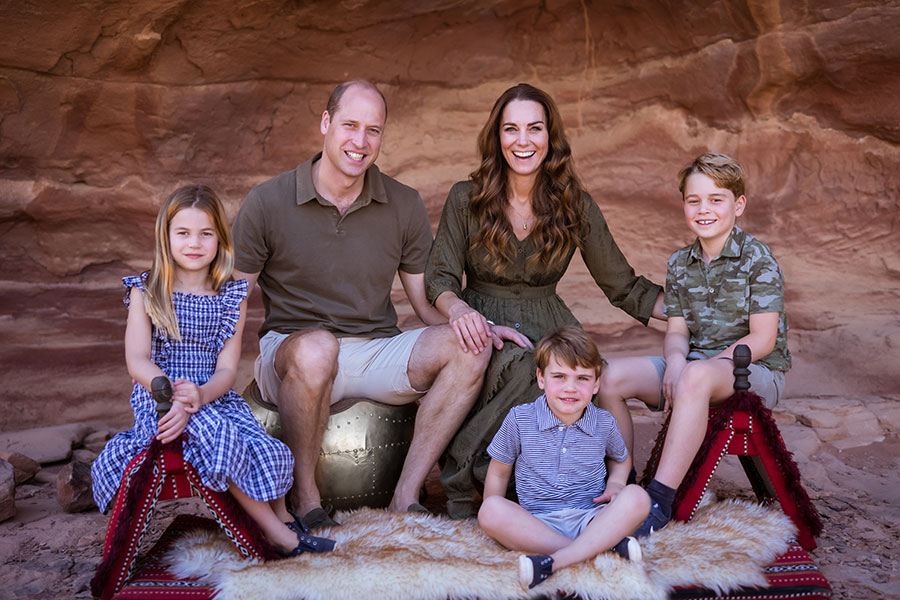 Prince William, Kate and their children Princess Charlotte, Prince Louis, and Prince George appear in a newly released family photo from their vacation in Jordan earlier this year. The new snap will be featured on the family's Christmas card this year. Photo: The Duke and Duchess of Cambridge/Handout/Getty Images

Prince William and Catherine, Duchess of Cambridge, shared the photo they’ll feature on this year’s royal Christmas card via their official social media channels on Friday. And while it isn’t exactly the most festive image, the family snap, set against a cave-like background, features the royal couple and their three kids, Prince George, 8, Princess Charlotte, 6, and Prince Louis, 3, on vacation in Jordan earlier this year. William and the two boys wear khaki shorts and golf shirts, while Kate and Charlotte don summer dresses.

“Delighted to share a new image of the family, which features on this year’s Christmas card,” the couple wrote on Twitter Friday, alongside the new photo.

Both William and Kate share a connection with Jordan. The duchess lived in the country for two years as a child when her father worked for British Airways as a manager, while William visited the country during a five-day royal tour of the Middle East in 2018.

Of course, last year’s family portrait — a favourite among royal watchers — was a little more in keeping with a traditional Christmas card, with the family clad in cosy sweaters posed in front of a pile of firewood.

Just a few days before releasing the new Christmas card snap, William and Kate spread some holiday cheer at the Together at Christmas community service at Westminster Abbey. The carolling service was attended by other Royal Family members, including Princess Beatrice and Princess Eugenie, William’s aunt Sophie, Countess of Wessex, Zara Tindall, daughter of Princess Anne, along with her husband Mike Tindall, as well as Kate’s parents and  siblings.

For the occasion, the Duchess of Cambridge wore a bright red Catherine Walker dress with a pair of sparkling chandelier-style earrings she borrowed from the Queen, while William complemented her dress with a red checkered tie paired with a dark suit.

The carol service, which will be broadcast on ITV this Christmas Eve, was put together to thank people across the U.K. who supported their communities throughout the pandemic. The event, headed up by Kate herself, was also attended by organizations with a royal patron, individuals whose causes align with The Royal Foundation, armed forces personnel involved in the evacuation from Afghanistan and faith leaders.

“What a special evening, seeing so many familiar faces, as well as meeting inspirational people who have gone the extra mile for their community in recent times,” Kate and William tweeted following the event.

The broadcast will feature carols performed by the Westminster Abbey choir and will see pop stars Leona Lewis and Ellie Goulding perform as well as  a piece, “To the Day,” performed by British poet and writer Lemn Sissay.

The Duchess of Cambridge will introduce the televised event alongside videos highlighting organizations that made a difference during the COVID-19 pandemic. Later in the broadcast, Prince William will give a reading.

In a statement, Kensington Palace said:

“The service will provide a moment for the nation to come together and reflect, to think not only of the extraordinary challenges that we have faced, but also to celebrate the acts of kindness that we have witnessed across our nation, the communities pulling together to protect and care for those in need, and those who have stepped up to help others.”