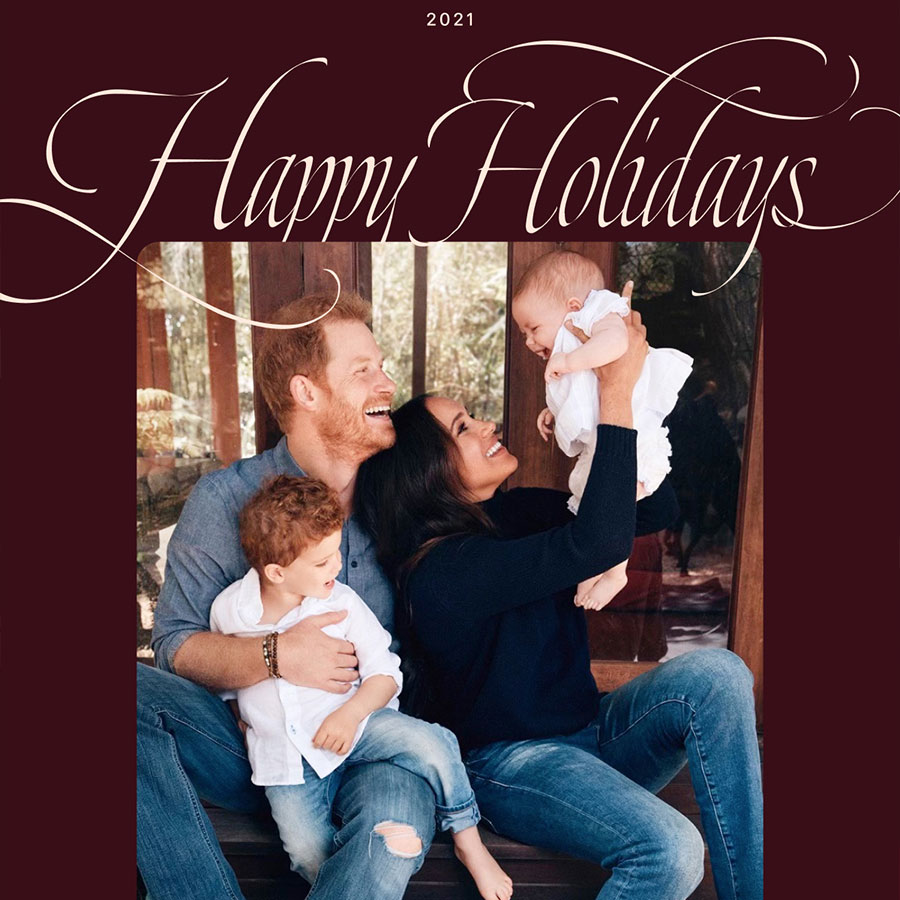 Harry and Meghan shared this year's Christmas card on Thursday, taken at their home in Montecito, California. Photo: Alexi Lubomirski/Handout/The Duke and Duchess of Sussex via Getty Images

Prince Harry and Meghan Markle released their Christmas card on Thursday, featuring a much-anticipated first look at their daughter Lilibet Diana, who was born on June 4.

The snap, taken at their home in Montecito, California, features a candid family moment, with both Harry and Meghan gazing adoringly at Lilibet. Their two-year-old son Archie, now clearly taking after his father with a full head of curly red hair, is seated in Harry’s lap.

“This year, 2021, we welcomed our daughter, Lilibet, to the world,” the card reads. “Archie made us a ‘Mama’ and a ‘Papa’, and Lili made us a family. As we look forward to 2022, we have made donations on your behalf to several organizations that honour and protect families — from those being relocated from Afghanistan, to American families in need of paid parental leave.

“Wishing you a happy holiday season and a prosperous New Year, from our family to yours!”

The card then lists a number of organizations the pair are supporting, including Human First Coalition, Paid Leave For All and Team Rubicon, a veteran-led organization the pair have supported in the past.

“We’re grateful to Archewell Foundation and Prince Harry and Meghan, The Duke and Duchess of Sussex for their support of our efforts to welcome Afghan families into communities across the country,” a message on the Team Rubicon homepage reads along with the Christmas card. “We are honoured to be amongst the organizations featured in their family’s holiday card this year.”

A spokesperson for the couple said they had connected with the organization during a visit to Joint Base McGuire-Dix-Lakehurst, where they were “moved by Task Force Liberty, home to 10,000 Afghan refugees.”

Their donation, the spokesperson explained, “will support resettlement sites like TF Liberty across the country, particularly as they find permanent homes for Afghan refugees in 2022.”

The family photo was taken by photographer Alexi Lubomirski, the same photographer hired for the couple’s wedding.

“To be trusted by your subjects enough, to open themselves up and have their connection documented and translated into an image, is one of the greatest gifts a photographer can have,” Lubomirski said in an Instagram post, in which he shared the family snap. “This day with the Duke and Duchess of Sussex was one such joyous experience, and one that I feel extremely privileged to have been invited to capture. X”

This year marks the second Christmas since Harry and Meghan left royal life behind for the U.S. Last year’s Christmas card featured an illustration of a photo snapped by Meghan’s mom, Doria Ragland. The candid shot featured the family of three in front of Archie’s playhouse along with their two dogs, Pula and Guy.