From Bombshell Interviews to Trailblazing Stars, the Top 10 Pop Culture Moments of 2021 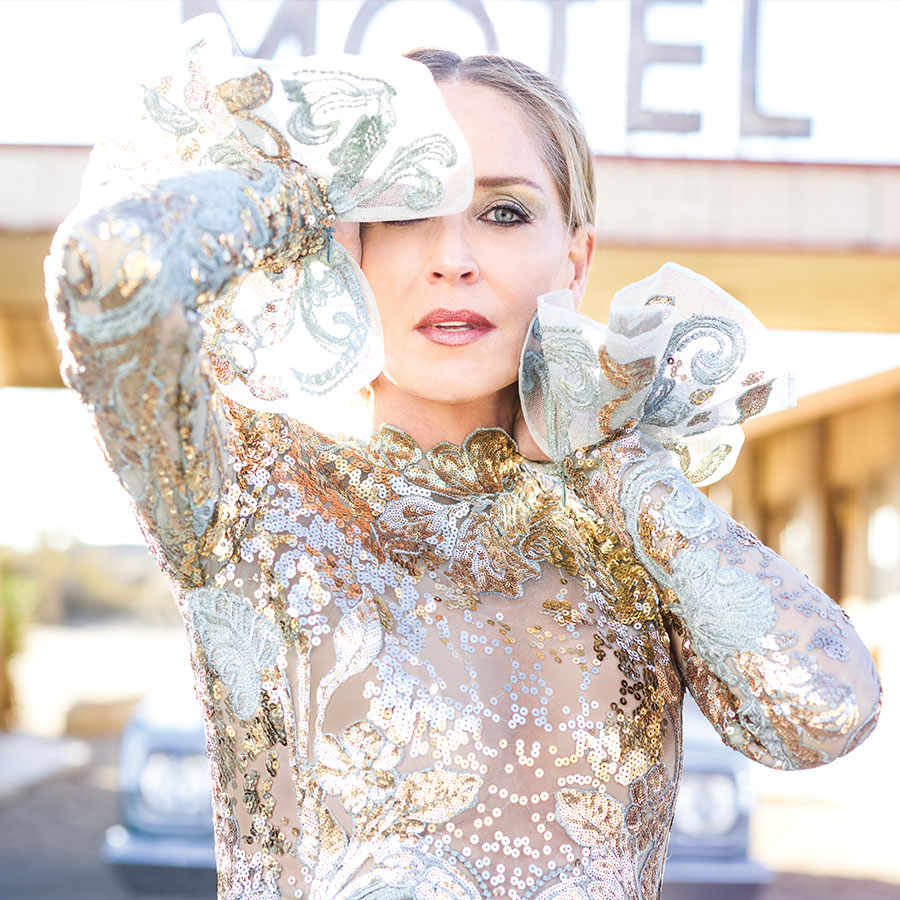 Actress Sharon Stone's viral moment — spurred by her Zoomer magazine cover story — was one of the Hollywood highlights of 2021. Photo: Michael Muller

The year 2021 — which felt both like a blur and, at the same time, excruciatingly long — contained a lot of pop culture high (and low) lights. Britney is now finally free (and just turned 40), Kim and Kanye broke up, and Ben Affleck (49) is back with Jennifer Lopez (52) — who hasn’t aged since their last romance 20 years ago. But that’s just the gossip. Read on for some of the most substantial achievements and scandals, power plays and power players from 2021.

With her March sit-down in Montecito with Meghan and Harry, Oprah Winfrey, 67 and culturally omnipresent (and nearly omniscient), reminded everyone why she is the Queen of the blockbuster interview.

After a whirlwind 2019 spent breaking free of their working ties to the House of Windsor (and setting a right-royal bonfire in their wake), the Sussexes opened up several fresh cans of worms while making Oprah’s jaw drop in the process: the stink bomb about a royal speculating about the colour of Archie’s skin before his birth; a teaser about the new baby’s gender; the intimate details about Meghan’s struggles with mental health and the Palace’s ignoring of same; plus a pointed clarification of just who made whom cry at a bridesmaid dress fitting.

The Royal Family closed ranks — recollections may vary was the party line, and William threw down a “we are very much not a racist family” as the sole retort. For an encore, in November, Oprah bagged the big interview with Adele, filmed in the exact same garden, getting the press-shy star to spill on her divorce, her weight loss journey and her new boyfriend. All in all, it was a power year for Oprah.

Sex and Your Fifties

And Just Like That…, the new HBO Max Sex and the City revival, stars three of the original principal cast members — Sarah Jessica Parker, 56, Cynthia Nixon, 55 and Kristen Davis, 56 — as they tackle new topics such as aging, grief and loss, and being out of sync with the times. The reboot addresses many of the problematic areas of the original series — namely that the cast was too white; outmoded ideas around slut shaming, office (and other) sexual harassment; anti-Semitism and gay stereotyping; toxic relationships; and a general frippery and unhealthy obsession about shopping and shoe worship. The shoes stay, but the rest of the story now deals with grey hair and teenaged children and changing sexual identities and a host of thorny, meaty issues. It is imperfect, but it is trying.

In other pop-culture reunions, we saw the Friends cast re-unite for an HBO Max special (another 90s sitcom that looks awfully non-diverse in the rear-view) and the Swedish supergroup ABBA get back together (albeit briefly) to release their first album in 40 years.

In a Zoomer cover story for the April/May 2021 issue pegged to her memoir, The Beauty of Living Twice, Sharon Stone let loose with a pent-up paragraph about how Hollywood — and the rest of us — fall at the feet of Meryl Streep and other anointed icons of acting. Writer Johanna Schneller asked the 63-year-old Stone, “So when you finally got to work with Meryl Streep, you realized—” setting Stone into a lather.

Stone’s comments were picked up by media outlets around the world in June and soon went viral. The next day Stone was more concise when she posted her own response to the viral moment: “To be clear; Meryl Streep is one of the greatest actors of all times. Just not to the exclusion of others. Sharon Stone”

And because living well is the best revenge, the Casino and Basic Instinct screen siren went on to slay the red carpet at Cannes and pause to accept the Commander of Arts and Letters award, the highest award in French arts.

The Renaissances of Stage and Screen Legends

Rita Moreno made history in the original 1961 West Side Story, winning a Best Supporting Actress Oscar — a first for a Latina actress — for the role of Anita. And now, the EGOT winner (meaning she has snagged all of the top statuettes: Emmy, Grammy, Oscar, Tony) has fresh Oscar buzz surrounding her performance in the just-released Stephen Spielberg version of West Side Story, where she plays widowed drug store owner Valentina. Moreno’s long (70 year!) and stellar career as an actress, singer and dancer (including a memorable stint on The Electric Company in the 70s) has seen her working steadily across the entertainment spectrum.

Then there’s Jean Smart, 70, who received a double Emmy nod (and one win, for Outstanding Actress in a Comedy Series for Hacks) for her recent work in Mare of Easttown and Hacks. Much beloved for her time on Designing Women (1986 to 1993), Smart was wonderful on the Emmy stage this year, talking about the thrill of finally getting handed roles she could sink her teeth into and the challenges of carrying on as a single parent after the death of her long-time husband earlier this year.

And in another remarkable return to the public eye, Dionne Warwick plonked herself into the middle of the conversation when she joined Twitter this year. Now 81, her sharp and witty retorts and call-outs turned her into everyone’s favourite wise (and wise-cracking) Twitter aunt. This year as well, Warwick was the subject of the documentary Dionne Warwick: Don’t Make Me Over, which screened at the Toronto International Film Festival — where the singer also received a TIFF Tribute Award. And she is reportedly set to have her life story portrayed in an episodic series with Teyana Taylor taking the lead.

In his final outing as the suave, sexy and dry-humoured British spy, Daniel Craig and the producers and writers of No Time to Die (including young phenomenon Phoebe Waller-Bridge, brought in to inject some modernization and sass and sticky emotion to proceedings) let James Bond age, finally, and ultimately grow as a character. 007 had always been conceived as an interchangeable hero: when one star retired from playing Bond, another stepped into the tuxedo without a twitch of an eyebrow.

The franchise’s tropes — fun weapons, cars and gizmos, over-the-top villains, epic chase scenes and an unending string of gorgeous babes with corny names for Bond to roll into bed with — were carved into the serialized franchise’s canon. But after 15 years with Craig as Bond, and 59 years after the character’s big screen debut, this 25th film in the franchise makes some big moves to acknowledge how the world has changed. In No Time to Die, Bond gets injured, he loves, he loses and he is surrounded by a bunch of strong women with agency and real jobs and real lines. They aren’t cannon fodder, nor are they (just) bedpost notches. The sensibility had to change to keep all the earlier films from being, in the modern vernacular, “cancelled” for being out of step with the times. If we embrace a new, flawed and (a bit) vulnerable Bond, we get to be in on the joke for the other 24 films of the beloved series.

The Crown Reigns Over Television

Season 4 of the wildly popular Netflix series The Crown ended with a big bag of award season trophies, but it was its sweep of the Emmys that cemented the streaming phenomenon in taking the TV crown, so to speak.

The Charles and Diana romance also finally made its debut, causing our own memories of that era to now meld with the onscreen, fictionalized take on the wedding of the century. Both Josh O’Connor as Prince Charles and Emma Corrin as Lady Di were nominated for Emmys, with O’Connor taking home the win in the lead actor category.

Fans were also treated to a sneak peak at the Season 5 cast, with Imelda Staunton, 65, taking on the role of the Queen, opposite Jonathon Pryce, 74, playing Prince Philip.

The Beatles Get Back

This year was a big one for fans of the Beatles and their individual members. To start, it marked the 50th anniversary of John Lennon’s “Imagine” (song and album) — celebrated by a global listening and watch party of the album and documentary of the same name, joined by Yoko and Sean Ono Lennon.

As well, the John and Yoko single “Happy Xmas (War is Over)” also turned 50, while a never-before-seen rehearsal video of the couple working on “Give Peace a Chance” was released.

As for Paul McCartney, he offered up his McCartney III Imagined album in April, followed by his career-spanning book of lyrics in November — where he revealed some revelations about the meanings and stories behind some of his most famous songs.

But what most of us are talking about this holiday season is the Peter Jackson-directed doc The Beatles: Get Back on Disney+. The incredibly-restored footage includes the full 1969 rooftop concert on Saville Row — the final time the Fab Four ever played together — for the first time ever.

The long-running scandal and fallout from the Woody Allen sex abuse accusations by daughter Dylan Farrow was resuscitated this year by the HBO documentary Allen v. Farrow. The saga began in 1992 in the midst of the Woody Allen and Mia Farrow divorce. Allegations that Allen had abused then-7-year-old daughter Dylan, whom he adopted with Farrow, came to light after Farrow discovered pornographic photos of her other adopted daughter, Soon-Yi Previn, in Allen’s apartment. The accusations played out in the courts and the media and Allen was exonerated at the time.

Dylan wrote an op-ed in the New York Times in 2014 clarifying her allegations of sexual abuse, but it wasn’t until 2017, at the height of the #MeToo movement, when she spoke up again that others started denouncing the director. Allen’s son, Ronan Farrow, of course, was the driving force behind uncovering the initial Harvey Weinstein revelations that lit a spark on the movement, and he supported his sister Dylan in bringing to light (again) her own allegations. Allen’s career was, then, effectively, cancelled.

The remarkable thing about the Allen v. Farrow documentary, which featured so much intimate family footage and powerful commentary, is how much both sides still have to say about a family rift played out in public. It is harrowing but compelling viewing, allowing the Farrow clan to finally have their full say in the matter.

Anthony Hopkins, 83, won the Best Actor Oscar for his role as a patriarch sliding into dementia in The Father, becoming the oldest winner of an acting Oscar in history (the previous record was held by Christopher Plummer, who won at age 82 for Beginners in 2012).

Costume designer Ann Roth, 90, became the oldest female Oscar winner ever (she was 89 at the time), winning the statuette for her work on Ma Rainey’s Black Bottom. She’s only a few months younger than the record-holder for oldest Oscar winner ever: Call Me By Your Name screenwriter James Ivory, who was 89 when he won his Oscar for Best Adapted Screenplay in 2018.

Women Get Their Solo Moment in the Spotlight

Tina Turner and Carole King were both inducted into the Rock and Roll Hall of Fame for a second time this year. The first time Turner, 82, was given the honour, in 1991, it was with former husband Ike Turner. King, 79, was also inducted previously, as a songwriting team in 1990 with her former husband, Gerry Goffin.

The re-inductions follow the trail blazed by Stevie Nicks, 73, who was the first female two-time Rock and Roll Hall of Fame inductee when she was recognized for her solo work in 2019 after being inducted as part of Fleetwood Mac in 1998. Tina Turner was also the subject of a new HBO documentary, Tina, last March.