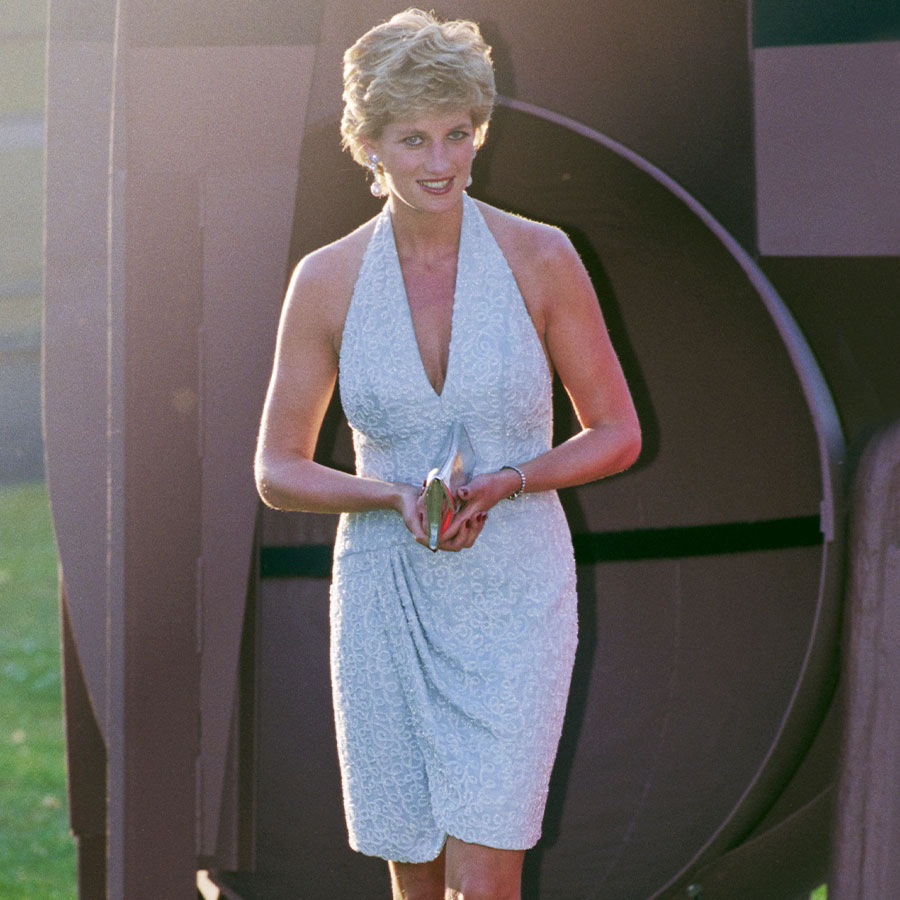 Diana, Princess of Wales, wears a pale blue halter dress by fashion designer Catherine Walker at a dinner hosted by Vanity Fair magazine at the Serpentine Gallery in Hyde Park, London, June 27, 1995. Recent set photos from the upcoming seasons of 'The Crown' show actress Elizabeth Debicki as Diana in a recreation of the dress, though at a different event. Photo: Princess Diana Archive/Hulton Archive/Getty Images

New photos from the set of The Crown show Australian actress Elizabeth Debicki decked out as Diana in a recreation of one of the late Princess of Wales’ final public appearances.

E! News noted that the image of Debicki, 31, as Diana was photographed during filming at New York’s Lyceum Theatre, which stands in for London’s Royal Albert Hall.

The event in question was a Royal Gala performance of Swan Lake on June 3, 1997 — just a few months before her tragic death on Aug. 31. At the event, Diana famously wore a turquoise Jacques Azagury gown as well as a diamond and pearl necklace and earrings. The necklace — which became known as “the Swan Lake necklace” — went up for auction in 2017 for US$12 million.

In the photos from the set of The Crown, Debicki is seen sans pearls and diamonds and wearing different dress which, as ET Canada pointed out, is “a version of a Catherine Walker halter neck dress worn by the late royal at a party a couple of years prior to the ballet.”

Diana, in fact, wore the dress to a Vanity Fair dinner at London’s Serpentine Gallery on June 27, 1995.

It’s unclear why the producers of The Crown chose not to outfit Debicki in the same dress and jewellery the real Diana so famously wore to the event, especially after previous set photos have shown the actress mirroring the fashion of the People’s Princess.

That includes this past November, when a shot surfaced of Debicki wearing a form-fitting black dress dubbed Diana’s “revenge dress” — which she wore to a 1994 dinner following the airing of a television broadcast called Charles: The Private Man, the Public Role, in which her ex-husband, Prince Charles, admitted to cheating on her during their marriage.

And, as Zoomer reported last October, Debicki and Prince Charles actor Dominic West, 51, were photographed recreating the royal couple’s 1991 trip to Italy, which they filmed off the shore of Spain’s Belearic islands.

Debicki and West take over as Diana and Charles in the fifth and sixth seasons of The Crown, alongside Imelda Staunton, 65, as Queen Elizabeth, Jonathan Pryce, 74, as Prince Philip and Lesley Manville, 65, as Princess Margaret. The seasons — the final two in the award-winning series — are expected to cover the lives of the Royal Family from the mid-1990s through to the early 2000s.

In September, Staunton appeared in a video to salute actresses Claire Foy and Olivia Colman, who portrayed the Queen before her in the series, and announced that the fifth season of The Crown would premiere on Netflix in November 2022.

The Crown: Netflix Reveals First Images of Charles and Diana for the Show’s Upcoming Fifth Season

Netflix Reveals Image of Imelda Staunton, 65, as Queen Elizabeth II on The Crown As the Actress Prepares to Play a More Modern Monarch